The Doosan Bears manager Kim Tae-hyung has his sights set on more glory. 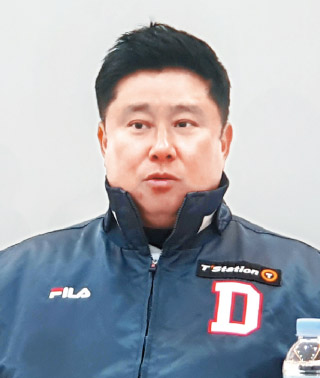 As the Bears held a kick-off meeting for the 2020 season on Wednesday, as well as celebrated the 38th year since the club was established, their season has now officially begun. The defending champions are pegged as the most likely club to win the title.

Although the club lost its No. 1 starter Josh Lindblom after he decided to head back to the majors, they quickly found his replacement by signing Raul Alcantara, who played for the KT Wiz last season.

More importantly, Kim Jae-hwan, who was registered onto the major league’s posting system, will be staying with the Bears for another year, meaning the club has managed to keep its offensive lineup the same.

The Bears are also currently negotiating with their free agent infielder Oh Jae-won. Having already appointed Oh as the Bears’ captain, Kim has expectations that this season, the club will be able to strengthen the pitching team as injured players are set to make their return.

Below are edited excerpts from an Ilgan Sports interview with Kim.

A. It always feels new because it’s a whole new season. Since we played well and won last year, this year, our goal will be to win, again.

Doosan ended up getting two new foreign pitchers. Tell us about that.

We couldn’t do much with [Josh] Lindblom and as for [Seth] Frankoff, we thought that his shoulder wasn’t looking too good. One pitcher [Raul Alcantara] already has experience [playing for the KT Wiz], and he pitched well in the second half of the season. And the other pitcher [Chris Flexen], it’ll depend on how he adjusts here. At Jamsil [the Bear’s home stadium in southern Seoul], our fielders are really good in defense. I think they’ll fulfill their roles.

After the Premier12 last year, Kim Jae-hwan made a surprise decision to be on the posting system. Unfortunately, it wasn’t successful. What did you think of his decision?

I think he was rushing too much. He probably dreamed of playing in the major league. Because of this, he may have just decided to do it once he got the chance. If he prepares well and performs well this season, he can definitely get there. Rather than getting disappointed, I want him to fulfill his role and play well this season.

Will the fans be able to see pitchers Jang Won-jun and Kim Kang-ryul at Doosan games this season?

Kim Kang-ryul started half pitching. If he’s O.K. and is normal, then his physical condition will be at a point to get included in the starting entry. Since he took a long break, he shouldn’t have any injuries in between. Won-jun is just getting started. He will have to pitch this season, but I don’t know when.

Who will be the closer?

Since pitcher Lee Hyoung-beom is the most consistent, I’m thinking of him as our closer.

The Bears will have the most free agents after this season. How do you feel about that?

It will motivate them. They can be overwhelmed, but they can also play better. We’ll have to see after the season, but it’ll definitely motivate them.

Ahead of the spring training, which position are you the most worried about?

Rather than the fielders, I’m worried about our bullpen. It’s important for pitcher Kim Kang-ryul to be back in his old form and fulfills his role in the middle. I have expectations for Kim Kang-ryul. I don’t know how much Jang Won-jun can do, but first, Kim Kang-ryul is the key. Since Gwak Been also has experience, he will make an appearance for Doosan [this year]. Once the injured pitchers return to the team, I think our bullpen will get stronger, but I still have concerns.

Last season, pitcher Lee Young-ha played very well and picked up 17 wins. What are your expectations for Lee this season?

He played really well last year. But since he tossed a lot of pitches, it’s very important to take good care of him physically and finish the season strong. He’s definitely a pitcher who can throw great pitches.

Which team do you consider as Doosan’s biggest competition?

I think the top-ranked teams are still great. I really don’t know because the league is becoming more standardized. Once the season ends, we see the rankings in the order of first to 10th, but in terms of the teams’ gap in the strategy, it’s getting narrower.