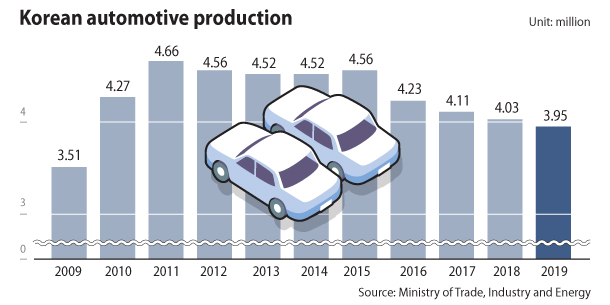 Production of vehicles in Korea fell below 4 million units last year, the first time since the global economic meltdown of the late 2000s.

The government blamed labor strikes as a primary cause.

The last time automotive production fell below 4 million was in 2009, when 3.51 million vehicles were manufactured.

The government said strikes at GM Korea and Renault Samsung Motors accounted for 92.6 percent of the decline.

“Overall production fell compared to the previous year as Renault Samsung Motors orders for the Nissan Rogue were slashed and GM Korea’s export to Europe ended while strikes were ongoing,” said a ministry official.

GM Korea workers were at odds with the company’s management over wage negotiations leading up to a partial and full strike for more than a month in August.

The Korean operation of General Motors has struggled, and the U.S. parent company agreed not to pull out of the Korean market while shutting its Gunsan plant in 2018.

Renault Samsung Motors has had its own friction between labor and management. Between October 2018 and last May, workers held strikes that resulted in a loss of 312 hours of production.

The strikes are continuing.

But production wasn’t the only problem in 2019 for the auto industry. Both domestic sales and exports fell as well.

Last year, 1.78 million vehicles were sold in the domestic market, which was a 1.8 percent decline year-on-year.

The decline in sales was not limited to Korean automakers, and imported brands suffered particularly badly. Koreans started to boycott Japanese cars after the government in Tokyo imposed trade restrictions last summer that were seen as retaliation for Korean Supreme Court rulings in 2018 against Japanese companies over the issue of forced labor during World War II.

In the first six months of last year, five Japanese brands saw a 10.3 percent increase in sales. In the second half, sales dropped 45 percent.

Exports by volume shrunk as well.