Celltrion’s chairman thinks big as he steps aside

Celltrion’s chairman thinks big as he steps aside 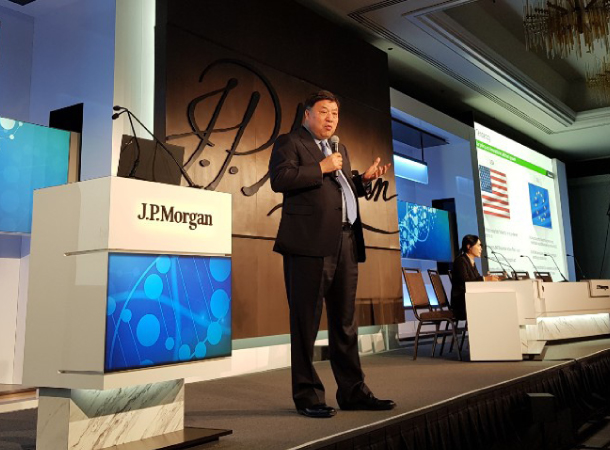 Celltrion Group Chairman Seo Jung-jin speaks Wednesday during his last presentation session at the J.P. Morgan Healthcare Conference held in San Francisco. Seo announced during his remarks that he will retire from all positions in the group by the end of this year. [KO JUN-TAE]

SAN FRANCISCO - Celltrion Group has plans for at least two new plants, with one of them being its first factory in China.

With a vision to establish itself as an all-around biopharmaceutical company by 2030, the Korean company is also planning to broaden its portfolio by rolling out vaccines, insulin, more biosimilars and novel drugs.

The group is even considering a merger among related Celltrion companies to achieve this goal.

Inside the Grand Ballroom of the Westin St. Francis hotel in San Francisco, Celltrion Group Chairman Seo Jeong-jin promised these goals to the audience during his last presentation at the J.P. Morgan Healthcare Conference. Seo announced during the session that he will be retiring by the end of the year.

In targeting the Chinese market, Seo said Celltrion is signing an agreement this month, for which further details are expected to be officially announced later through a regulatory filing.

“By the next decade, we will be fully transformed into an all-around pharmaceutical company by being the first mover in new markets,” Seo said.

According to the chairman, the deal will allow Celltrion Group to build the largest biopharmaceutical manufacturing plant in China, with a 120,000-liters capacity, and build a direct sales network throughout the country.

Celltrion became the first foreign company to earn approval from Chinese health authorities to start clinical trials in China for a biosimilar when its application to start trials for Remicade-referenced infliximab biosimilar Remsima was approved in May 2017.

If left with enough capacity, the new plant could also take contract manufacturing projects for other biopharmaceutical companies.

And by 2030, the company plans to build 16 biopharmaceutical product portfolios and pursue large-size contract manufacturing opportunities in the Chinese domestic market using the new plant. If finding enough demand and achieving enough in sales, the group, Seo says, could consider building another plant in the country.

On top of expanding its reach to China, Celltrion Group is on track to tackle new areas within the biopharmaceutical industry for additional profits.

During his presentation, Seo said Celltrion is also expanding to the diabetes treatment market by starting off with the development of insulin biosimilars. Through in-license agreements and co-development projects, Celltrion seeks to set foot in the $40-billion market.

To enter the market by 2023, the chairman said Celltrion will reach a decision by the end of the year to either purchase a syringe manufacturing company or make one itself. Insulin prices tend to be high due to the high price of syringes, he added.

In a follow-up breakout session, Seo announced that Celltrion will also start developing vaccine products and add force to the group’s grand initiative of being an all-around pharmaceutical company.

Without going into further detail, Seo said his firm is projected to complete developing an “innovative” vaccine product by the end of this year, having already completed development of a flu vaccine.

He added that the products are made to target the Asian market, where “4 billion out of 7 billion people in the world live.”

And to sell all of the new products that Seo says will add to Celltrion’s portfolio, the chairman said Celltrion Group will start setting up its own sales network in target markets.

“I just need one-tenth of the number of sales employees that other pharmaceutical companies use in each market,” Seo said during the Q&A session.

The chairman said he plans to hire 500 sales personnel to form a direct sales network in the United States, unlike competitor companies that each have around 5,000 salespeople.

By hiring fewer employees, Seo said he can offer Celltrion’s products at cheaper prices to each market, thereby raising competitiveness and gaining a stronger foothold.

Moreover, Seo revealed that Celltrion Group is also planning to build another biopharmaceutical production facility in Incheon, with a capacity of 20,000 liters.

Even a merger in plan

Seo’s big surprise Wednesday was the possible merger of three companies - Celltrion, Celltrion Healthcare and Celltrion Pharma - into one company “if that’s what shareholders want.”

The idea is in line with Seo’s plan to make Celltrion Group into an all-around biopharmaceutical player. The potential plan could also work favorably for Celltrion Group, which was under Financial Supervisory Service (FSS) investigation in 2018 for alleged accounting irregularities.

The FSS suspected that the company had violated accounting rules when it sold the right to sell biological medicines in the Korean market back to a related company for 21.8 billion won ($19 million).

The Korea Exchange requested an explanation of Seo’s comments and set a Friday deadline.

The grand initiatives come as Celltrion has been gaining success in global markets with its biosimilar products. The Korean company is considered by many as one of “first movers” that recognized the value of biosimilars and made bold investments.

According to the company, Celltrion had 81 percent, or $1.4 billion, of the global monoclonal antibody biosimilar market in 2018, while its two competitors had 8 percent and 7 percent market share, respectively.

Celltrion has also seen growth in the uptake of its rituximab biosimilar, Truxima, and trastuzumab biosimilar, Herzuma, in Europe, with their market shares reaching 38 percent and 15 percent, respectively.

The company’s profit level is expected to be even greater when Remsima SC goes live in Europe after earning approval from the European Medicines Agency in November.

According to Seo, Remsima SC, the world’s first subcutaneous formulation of infliximab, is in demand in Europe.

Remsima SC is expected to be introduced in 27 countries around June or July this year.

With the new initiatives announced and Seo announcing his retirement, the major company’s first generation is coming to an end.

Since Seo founded Celltrion in 2002 with only a handful of colleagues in San Francisco, Celltrion has grown to a company with market capitalization of 22.7 trillion won as of Tuesday.

The company has grown itself from a contract manufacturing organization to a biosimilar-specialized company that has so far earned regulatory approval for four biosimilar products.

Even though Seo is retiring and moving to start a new business, his shares in and influence over the group remain intact.

Below are edited excerpts from an interview Tuesday held in San Francisco.

Q. When are you retiring from Celltrion Group?

A. I’m putting my boots up on Dec. 31 this year. I believe the time has come for my younger colleagues to take control of the group without me. I’m a founder, which means I should leave after realizing the dream in mind. If a founder doesn’t leave the company [voluntarily], it means he is on track to crumble down his own achievements. I think I’ve done enough, so now it’s time to go.

How do you evaluate what you have done for Celltrion Group?

I have always emphasized that we will be a “game changer” in this industry. We’ve got to transform into an all-around pharmaceutical company if we want to drive the growth of the Korean biopharmaceutical industry. Celltrion started out with biosimilars and later with biobetters. And now we are striving towards 18 biological products approved by 2030. I think I’ve done enough.

What do you envision from the Korean biopharmaceutical industry?

The biopharmaceutical industry was started in the United States and Europe, but I have been growing Celltrion to make Korea into a country that can have everything supplied from itself. That’s why I have been working with Samsung BioLogics to make Songdo, Incheon, into a “bio valley.” I’m retiring, but I wish I have contributed to making Celltrion a place where many young people of this nation can live prosperously in the next 10 to 15 years.

What advice do you have for others?

When I started making biosimilars, everyone in the world said that age is not going to come. When I started making biobetters, the U.S. Food and Drug Administration didn’t even have set guidelines to evaluate them. We were the first in history, and there were no set standards. Call yourself a game changer. Start an unlimited competition. What I mean when I say I’m a game changer is that when I do something, others should follow.

Who’s going to be the next leader for Celltrion Group?

My two sons are not going to be the CEOs of Celltrion Group affiliates. And when I’m stepping down, I’m stepping down from the board as well. My sons will replace me on the board, and maybe the older one will take the board chair seat. The best solution I reached was having my sons sit at the board and have professional managers sit as CEOs.

What is your next on your agenda?

I’m going to create another company in the direction of the fourth industrial revolution and have a clean start. In the next few decades, because of an aging society, telemedicine is going to become a reality, and for that to happen, every household needs a diagnostic device. If legislation is changed so that data at hospitals can be combined, in the next 10 years after some training, doctors would be able to diagnose their patients remotely. That’s the area I’m interested in.