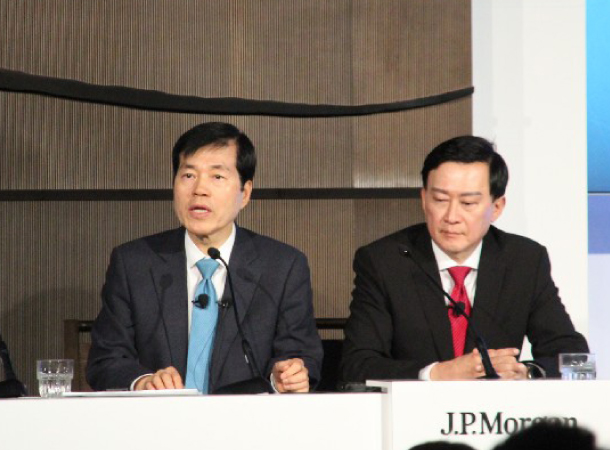 SAN FRANCISCO - Samsung BioLogics will make its first overseas expansion with a research and development laboratory near San Francisco, the company announced at a conference Wednesday.

“Samsung BioLogics has undisputedly grown into a global bio company from a total of 47 products it manufactured, gaining approvals from global health regulators,” Kim said, adding that the company is making its first step out of Korea to attract a growing number of biotech companies that are looking to develop new drugs.

The biopharmaceutical affiliate of Samsung Group started out with a sole focus on contract manufacturing organizations (CMO), in which it produces large quantities of drug candidates for clinical trials and commercialization.

The company is currently working to grow its contract development organization (CDO) division, which handles contracts for the production and assistance of drug development up until the filing of applications to health authorities and the start of clinical trials. It hopes that focus can attract clients and serve as a foundation for Samsung BioLogics to manufacture their products.

This year, Samsung BioLogics is aiming to add at least 18 more CDO projects, for a total of 60 since founding the CDO business unit in 2017.

To attract potential clients in the early stages of drug development, the company says it has shortened its drug development process to around 14.5 months, compared with 18 months for its CDO competitors. Samsung BioLogics’s goal is to eventually shorten the timeline to nine months.

The company said it is also reviewing plans to expand further to the United States, Europe and later to China.

“If we expand to the United States, we can be geographically closer to our customers,” said Samsung BioLogics Executive Vice President John Rim, who presented alongside Kim for the session.

The company announced earlier this week that it will invest more in its new small-scale CMO business to provide a smooth transition period for clients with CDO projects looking for CMO partnerships.

With these two investments, Samsung BioLogics is working to build a pool of captive customers. The company has also been improving its testing and evaluation services for candidate therapies.

Samsung BioLogics said the whole purpose of expanding its CDO business to overseas is to bring more business back to its three bio manufacturing plants in Songdo, Incheon.

Samsung BioLogics also said it expects to see a boost in profits from being well-positioned to land a CMO project producing Alzheimer’s disease treatments.

Due to high demand for such treatment, Samsung BioLogics said that the company has enough capacity to produce needed quantities of treatments when inquired.

Samsung BioLogics is the world’s largest CMO for the biopharmaceutical industry, with a 364,000-liter capacity from its three plants in Incheon.

Anticipation for a commercialized Alzheimer’s treatment has grown after Biogen resurrected aducanumab. New analyses from the company found that the drug still seemed to work when injected in high doses.

The Cambridge, Massachusetts-based life sciences company has yet to file an application with the U.S. Food and Drug Administration for aducanumab, but Biogen is already working to start mass production and said it is looking for partners.

In anticipation of other biopharmaceutical companies racing to launch Alzheimer’s disease treatments, Samsung BioLogics is reviewing a plan to start constructing a fourth bio manufacturing plant.

The best option, the company said, would be to duplicate its third manufacturing plant.

But as it looks to diversify its manufacturing options for clients, Samsung BioLogics said the new plant may include slight changes to include other gadgets.