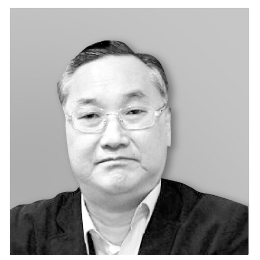 Kang Tae-uk
The author is an opinion editor of the Korea JoongAng Daily.

My eternal mentor Kim Young-hie — the legendary journalist in Korea on par with the late Helen Thomas not only in terms of his seemingly never-ending career as a writer, commentator and columnist, but also in terms of his marvelous sensitivity to set off alarms on volatile global issues faster than anybody else — has passed away at the age 83.

My memories about him linger — starting with the early days of my career as a reporter at Newsweek Korea and at Newsweek headquarters in New York in the early 1990s and ending with an emotional hug on the last day of December 2018 — shortly before he left his office on the second floor of the JoongAng Ilbo building for good.

When he looked at a piece I wrote about diplomacy some 30 years ago, he immediately ordered me to come to his room and lambasted me about the shabby quality of the article. When I was leaving his room after enduring the 30 thundering minutes of criticism — including one nearly bordering on “character assassination” — he kindly advised me to pick up all the pieces of manuscripts that had fallen on the floor before I returned to my job.

When an aide to former Soviet Union President Mikhail Gorbachev called to offer me the chance for an exclusive interview in 2000 — and I told Kim about it — he immediately praised me for grabbing such a rare opportunity and then instantly snatched it from me, and ordered me to prepare 30 questions before the interview. After I finished those questions, he chose only four of them, used his own questions for the rest, and gently told me to accompany him for the interview scheduled for an hour at a tight-security room at the Shilla Hotel.

I will never forget the tenacity, the humor and the passion of the veteran journalist in his late 60s, which was powerful enough to move Gorbachev throughout the 80-minute-long interview. That meeting ended with an unchallenged scoop — the first ever interview by the Korean media with the legendary leader who pioneered an uncharted path for the Soviet Union toward democracy.

Without his endless scolding and chastising, I could not have survived in this time- and energy-consuming jungle of journalism. As he set an impeccably admirable — and admittedly unrivalled — example of the way pressmen should proceed, he undoubtedly left an indelible footprint on this country — and the rest of the world.

I wish you enjoy a tranquil and peaceful rest across the river from now on — and see you soon there, my teacher.