Get ready to rock ‘n’ roll Seoul, Queen is here: After success of the 2018 Freddie Mercury biopic, the band has new group of fans

Get ready to rock ‘n’ roll Seoul, Queen is here: After success of the 2018 Freddie Mercury biopic, the band has new group of fans 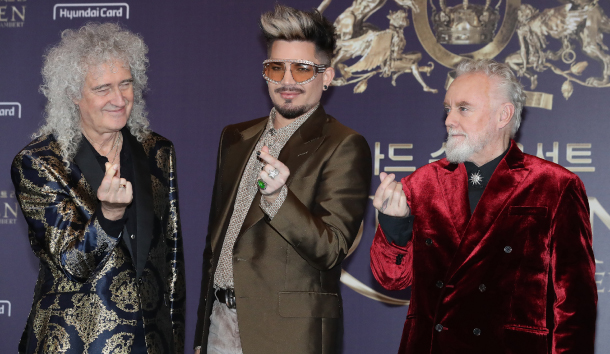 The members of Queen, from left, Brian May, Adam Lambert and Roger Taylor, pose for photos on Thursday at the Conrad Seoul Hotel, western Seoul, prior to its concerts to be held on Saturday and Sunday. [YONHAP]

If they could go back to the beginning, the members of Queen say that they wouldn’t do anything differently.

Queen, the rock band that took the world by storm during the 1970s and 1980s, is in Korea ahead of its “Super Concert 25 QUEEN” concert sponsored by Hyundai Card being held at the Gocheok Sky Dome in western Seoul on Saturday and Sunday. Guitarist Brian May, drummer Roger Taylor and singer Adam Lambert - the former “American Idol” star filling in for the late Freddie Mercury - met with local press on Thursday at the Conrad Seoul Hotel in Yeouido, western Seoul, prior to the two-day extravaganza.

“I would first like to say gamsahamnida, thank you,” said May.

“We are so excited. It’s so good to be back, and we’re ready for a great show. We took the tour out of North America, and they loved it, they loved the production. It’s dazzling,” Lambert said.

Queen performed in Korea for the first time in 2014 as a part of the Super Sonic festival, but this is the first time the band is holding a solo concert in Korea. The concert comes as a part of “The Rhapsody Tour” which kicked off in Vancouver in July 2019, following the success of the 2018 film “Bohemian Rhapsody.” Directed by Bryan Singer, the biopic about Queen’s frontman Mercury attracted nearly 10 million moviegoers in Korea - greater than the number of tickets sold in Queen’s homeland of Britain.

When asked whether they had heard about the movie’s success in Korea, May said, “The news got to us.”

“It’s wonderful. It’s brought a new generation to us. We witnessed at the airport young kids screaming at us, which is something we haven’t seen in a while. It’s a wonderful feeling that the movie has generated,” he said.

Queen began “The Rhapsody Tour” after its 2018 biopic “Bohemian Rhapsody” was a huge success around the world. [20TH CENTURY FOX]

Taylor added, “It was very difficult to make, but in the end we were happy with the way the movie came out. But we didn’t know if it was going to be a success. It’s a lottery when making a film about you and your career. You don’t know what’s going to happen. It’s just throwing it to the world. It came back fantastic. We’re very, very happy, and we’re here to prove that.”

The success of “Rhapsody” brought along a new level of success for Queen, according to members.

“In some ways, it’s very similar [to when Freddie Mercury was alive],” said May. “We make music, and we make people happy. Adam’s been with us for quite a while now. In some ways, it’s different because back then we were hacking ourselves out into the world. We were creating a new situation for ourselves. But I think we’re in a place where we know where we are now.

“We’re still playing and evolving things. It’s not like a dead animal. It’s very much alive and evolving with Adam. We do a lot of sound checks, and we keep changing things and experimenting.”

“I first came here many years ago in the 1980s with John Deacon. It’s incredible to see how much Seoul has changed and become so much more modern. It’s absolutely a pleasure to be here. Every time I come, it seems to change and be a more and more modern city. We’re proud of our stage show. We can’t wait for people to see it,” Taylor said.

Since 2012, Lambert has been singing with the band. Deacon quit the band in 1997, after Mercury’s death in 1991. Working with Lambert for almost 10 years now, May and Taylor credited Lambert for the reason that Queen flourished in its later years without Mercury. Lambert kicked off his singing career in 2009 after finishing second on the eighth season of “American Idol.”

“I’ve always said that it’s been one of the greatest honors of my career to sing for Queen,” Lambert said. “Freddie is a personal hero as a singer, as a musician and as a fashion icon. When I first started with the band, I knew that living up to that standard would be impossible. But when I talked to Roger and Brian, they told me that instead of imitating Freddie, the key to making this work was to look at the songs as a beautiful piece of music. So once I got that out of my head, it showed, and I started communicating with the audience as well.”

Asked their opinion on BTS’s recent performance at Wembley Stadium in London and the success of K-pop, May said, “It has made a big impression on England.”

After the Seoul concert, Queen will fly off to Japan next week, then perform in New Zealand and Australia in February. Their European leg of the tour will begin with a concert in Italy on May 24 and finish off on July 8 in Spain. Decades into their career, May says that he now takes his health seriously to make sure he has the energy to pull everything off, as well as sticking to a vegan diet.

“I take fitness a lot more seriously than I used to. I’ve been [taking part in the] animal campaign for a while now[…] If you’re not eating animals, then it’s good for you and you’re treating the planet better and it’s better for the animals. I get healthy from exercise and diet. When I was a young man, I wasn’t bothered,” May said.

“I play the drums. That’s quite enough exercise,” added Taylor.

Looking back on its success, they wouldn’t change anything in any way, member said.

“I think success is due to many things. It’s due to hard work, faith in yourself, and you must have talent. But above all, you need luck, you need the good grace. Really, looking back, we feel very lucky. We had other things, but we had luck and timing. I think to interfere with fate, I wouldn’t do anything different. It’s been great,” said Taylor.