‘Wage war on vested interests, not on the real estate market’

‘Wage war on vested interests, not on the real estate market’ 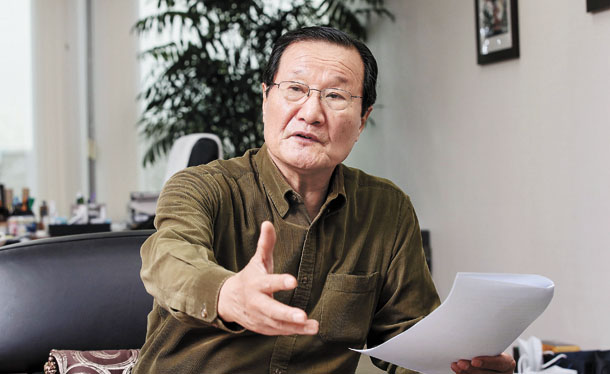 Yoon Jeung-hyun, the research director at the Yoon Economic Research Institute, shared his economic advice to overcome our stagnant economic growth in 2020. Former Finance Minister Yoon was the leader in countering the 2010 global financial crisis. Providing countless examples with specific numbers, Yoon came up with abundant analyses that were worth listening to, especially for President Moon Jae-in and current government policy directors.

Uncertainty remains about the future of the Korean economy. Growth is about to drop to the 1 percent range. Excluding the semiconductor industry, the export market is not doing so great. Whether to overcome the stagnant growth or to maintain the state the economy is in will depend on who is in the driver’s seat. For some firsthand experience, the JoongAng Ilbo asked the former finance minister how he would assess the economy.

Q. What do you think about the criticism that our economic vitality has fallen too much?

A. The GDP deflator has been negative for the fourth consecutive quarter, which is considered a composite price index affecting the whole economy including national income. Some experts say our economy is already in deflation. Of course, the Bank of Korea does not agree because the Consumer Price Index remains positive. But it is evident our economy is struggling under recession. These indicators represent the failure of the current admiration’s economic policy. It is not too late to build a new paradigm. Of course, we should not overstate a crisis, but we should not deceive people by promising a prosperous future with groundless claims. At times we need to act in advance.

What are your thoughts about the three years of income-led growth?

This is a key question on how to interpret our economic situation. Without a change of attitude, only a lot of national resources will be wasted without making the situation any better. It is clear that income-led growth includes policies that are unfavorable to the market and corporations. These are policies that are not taking the employers into account. The 52-hour workweek system is even worse. Workers need “food to eat for dinner,” not a “life with an evening.” As earnings decrease, people are looking for second jobs. Minimum wage and working hours should vary depending on the occupation, industry and size.

The current government does not seem to budge, no matter how much the problem is addressed.

I do not understand that either. This government gives no feedback to the market or the media. Even when the media criticizes the government, it interprets it to its own advantage. It is like preaching to the wind. When problems are addressed, there should be some efforts to amend the problems, but I have not noticed any efforts so far. Only peripheral solutions that are one-time policies. The government should respect the market’s autonomy and promote innovation and entrepreneurship. In order to overcome the current crisis, the government needs to completely revise its income-led growth policy.

President Moon announced, “I will not lose a war against real estate.” Opposition parties criticized Moon for not being able to perceive reality. What do you think about that?

As a former participant in the government, this is hard to understand. When the president made a speech, advisers wrote it down for officials to read. Maybe there is no such process anymore. From what I recall, the debate can get so heated that officials throw their pencils. The search for an alternative through this process is the answer. Through such a process, the head of the state can find solutions for the people.

The Blue House leads all the policy work, and the cabinet merely executes the orders. This does not make sense. Why would there be different ministries in the presidential system? Prime ministers and deputy prime ministers are there to reconcile disagreements among ministries. Now we have no clue how the speeches are written because even reporters with access to the Blue House do not know.

The fourth industrial revolution is, after all, digital transformation. It is the infinite integration of software and hardware, with artificial intelligence (AI) at the center. There is no exception to any country. The World Economic Forum in Davos in 2016 shared three key messages: first, a flexible labor market; second, change in the education sector emphasizing collaboration and creativity; third, innovation in science and technology. In short, regulatory reform was a common topic at the forum. These messages are definitely directed at Korea.

Our flagship industry is losing its competitiveness, and new industries are under regulation. One example is banning Tada, a rental van-hailing service. The government’s role is to find a way for taxis and Tada to coexist, not to remove them completely. This is a path to national ruin. Politicians are also meddling with the mergers and acquisitions (M&A) process of Baedal Minjok, a food delivery app in the country, and Delivery Hero. The passage of three data bills carried over a year. It is unbelievable.

Why is this happening?

Instead of fostering new industries, the government and politicians are only concerned with strengthening their vested rights. Labor groups only include 10 percent of all laborers, and the working environment for people in this industry is outdated. Now is the time to fundamentally restructure the regulatory paradigm and the existing behavior in the labor market in order to promote competition and challenges. Every citizen must persuade and even confront those with vested rights.

What do you mean by “confront”?

In a New Year’s greeting President Moon declared war on real estate speculation. More importantly, it is time to declare war on those with regulatory vested interests. In order to persuade them, not only must the government step forward but also every citizen. Take a look at the 2019 French pension reform plan proposed by French President Emmanuel Macron. He merged dozens of pensions into one and lowered the pension-receiving age after retirement. Despite nationwide strikes, he is continuously persuading people across the country. There is already a sign of the effect. The unemployment rate is down, companies are back and citizens are now supporting him.

How do you respond to the criticism that the government’s fiscal addiction is serious?

Economic development must eventually raise people’s living standards. The problem is financing. As costs increase, the tax burden GDP reaches 20 percent, which is not a small amount. The country is set for a 60-trillion-won ($52-billion) deficit this year. If we have to improve welfare, we must adhere to three principles: first, have a willingness to self-support; second, be there only for people in need; and third, be sustainable. But now the problem in the politicization of the economy that leads to populism. As the financial situation worsens, the credit rating will be downgraded. Even if we are financed abroad, it could lead to a financial crisis.

The government’s real estate policy is also confusing. Do you agree?

In the real estate market, there must be supply where there is demand. All sorts of regulations are blocking supply, such as special purpose high schools and autonomous private high schools. Consequently, the traditional education hub of School District 8 is being revived in Gangnam, which was a critical factor in raising housing prices. The market forces should be left as principles.