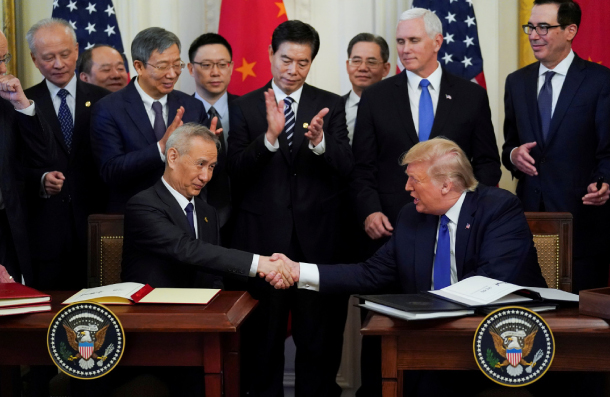 After signing a deal with China to settle a rancorous trade war, U.S. President Donald Trump on Wednesday said he will be “working very closely” with Beijing on denuclearization negotiations with North Korea, a process he likened to a “very beautiful game of chess.”

In a press conference at the White House held with China’s chief trade negotiator, Liu He, Trump boasted about what he called a “momentous step” for trade relations between the world’s two largest economies and threw a heap of praise on Chinese President Xi Jinping, who he thanked for cooperation on a range of global issues including North Korea.

“China is helping us with a lot of the things that they can be helping us with - which you don’t see in a deal, but they have been very, very helpful with respect to [North Korean leader] Kim Jong-un, who has great respect for President Xi,” Trump said.

The negotiations with the North are “all a very, very beautiful game of chess, or a game of poker,” he added. “I can’t use the word “checkers” because it’s far greater than any checker game that I’ve ever seen. But it’s a very beautiful mosaic.”

At a luncheon with Liu following the press conference, Trump repeated his metaphors for the talks with North Korea - describing a “world-class chess match or poker match” - stressing that Washington and Beijing were “going to work together for the benefit of our countries, but also, very importantly, for the benefit of the world.”

Trump’s remarks - his first public comments this year on the deadlocked negotiations with Pyongyang - follow recent messaging from the United States beseeching Beijing’s cooperation with regard to the North Korean question.

Before meeting his South Korean and Japanese counterparts on Monday, U.S. Secretary of State Mike Pompeo underscored China’s role in pushing the North toward denuclearization, saying the issue was “unlikely to be resolved without the Chinese government also weighing in.”

With global sanctions throttling North Korea’s economy, the country has been increasingly reliant on China to meet its trade needs. According to data from the South Korean Ministry of Unification, trade with China accounted for 95.8 percent of North Korea’s external trade in 2018, worth around $2.7 billion.

That overall trade figure represented a sharp decline from 2017 - before the latest United Nations sanctions took effect - when trade between the two countries stood at around $5.26 billion. Official statistics showed China complied with UN resolutions by prohibiting the export and import of articles banned by the sanctions, such as mineral resources, industrial equipment and textiles.

Last month was the deadline mandated by UN Security Council Resolution 2397 for member states to expel North Korean laborers working on their soil, part of an effort to deprive the cash-strapped North Korean regime of a lucrative source of foreign currency that could go to its weapons program.

While China and Russia have ostensibly abided by the sanctions, provoking an exodus of North Korean workers through last year, the two countries also submitted a draft resolution to the Security Council late last year proposing to lift the labor ban and free up some exports, which was shot down by the United States.

Yet experts note that the difficulty of monitoring activity along the China-North Korea border foster doubts about sanctions compliance, particularly with regard to provincial governments in China’s northeastern provinces that rely on North Korean migrant workers for cheap labor.

The Trump administration’s direct appeals to Beijing’s leadership appear to be addressed at ensuring North Korea is placed under sufficient economic strain that it returns to nuclear negotiations - and compromises with Washington’s demands for major steps toward dismantlement of its nuclear facilities.

Yet with the regime bracing for what Kim called “another arduous and prolonged struggle” with the United States, it is unclear whether such tactics are working. On Thursday, the regime’s state-run Korean Central Television accused Washington of harboring an ambition to invade North Korea and showing deceit with its call for dialogue by deploying an armored brigade combat team to South Korea.

With the North insistent on sanctions relief as a condition to resume talks, South Korea dispatched nuclear envoy Lee Do-hoon to Washington Wednesday to discuss what Lee said was the possibility of allowing individual South Koreans to visit North Korea to encourage engagement. In a New Year’s press conference Sunday, South Korean President Moon Jae-in referred to such an option as something that “the South and North could do within limited constraints.”