From what was considered the toughest group in the Asian Olympic men’s football qualifying tournament, Korea emerged as the only undefeated nation. 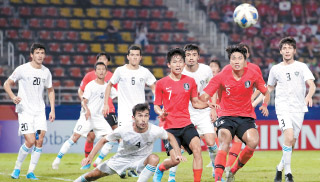 Korea?#175;s U-23 football team, in red, competes against Uzbekistan during the Group C match at the Asian Football Confederation (AFC) U-23 Championship at Thammasat Stadium in Rangsit, Thailand, on Wednesday. [YONHAP]

In fact, they were the only team to win all three group matches in the entire preliminary round of the Asian Football Confederation (AFC) U-23 Championship in Thailand.

Now the real work begins, as Korea is set to take on Jordan in their first knockout match of the tournament.

The quarterfinals showdown will kick off at Thammasat Stadium in Rangsit, Thailand, on Sunday at 5:15 p.m. local time, or 7:15 p.m. in Seoul.

This AFC event is also the qualifying competition for the 2020 Tokyo Olympics, and the top three teams from here will be at the Olympics this summer. Korea is chasing their ninth straight appearance in the quadrennial Summer Games.

Korea opened the AFC tournament with a narrow 1-0 win over China on Jan. 9, with second-half sub Lee Dong-jun scoring in the dying moments of the surprisingly tight match. Head coach Kim Hak-bum then flipped his lineup over, inserting seven new faces into his starting 11 for the second match against Iran. And two of those new names, Lee and forward Cho Gue-sung, had a goal apiece for a 2-1 victory last Sunday.

That victory assured Korea a place in the quarterfinals, but Kim wasn’t done tinkering. Against Uzbekistan on Wednesday, Kim replaced six members in his starting lineup from the previous match. Forward Oh Se-hun, who struggled mightily against China and got benched against Iran, scored twice in his return to the starting lineup. Korea won 2-1.

With the exception of two backup goalkeepers, Ahn Joon-soo and An Chan-gi, every Korean player saw action during the preliminary round. Coach Kim has often spoken glowingly about the depth of his team and has said he has confidence that anyone can step into the starting lineup and contribute.

And if Kim’s first three matches are any indication, the coach will most likely shuffle his starters again.

That both of the team’s strikers, Cho Gue-sung and Oh Se-hun, scored in the group stage is certainly encouraging for a team that, at least in the opening match, appeared to have trouble finishing around the net. Lee Dong-jun, the reigning MVP in the second-tier domestic competition K League 2, has looked to be in midseason form.

Jordan had a win and two draws in Group D against the United Arab Emirates, Vietnam and North Korea. They scored three times and allowed two.

While Korea may have the edge in talent on paper, players are mindful of the fact that anything can - and often does - happen in knockout matches. Losing in the quarterfinals will send Korea packing with no chance of qualifying for the Olympics. Take another step forward to the semifinals, and a loss there will at least relegate Korea to the third-place match, where a win will secure a spot in Tokyo.

“It’s going to be do-or-die starting in the quarterfinals, and we’ll have to play as a team to get the job done,” said goalkeeper Song Bum-keun, who has played every match so far. “There could be a lot of 1-0 games in the knockouts. Every goal will matter.”