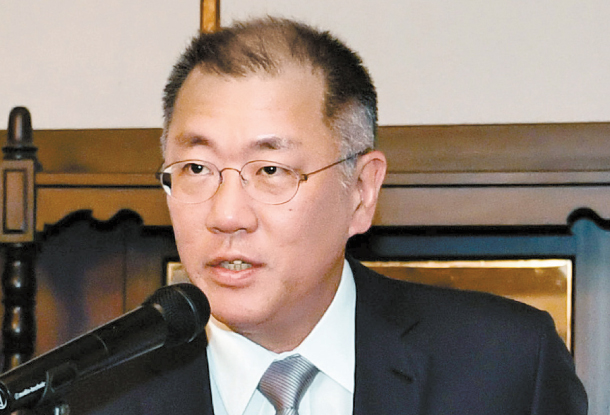 In line with Hyundai Motor Group’s push to expand its portfolio of fuel-cell electric vehicles, the corporation’s chief envisions a future in which hydrogen powers both personal vehicles and public infrastructure.

In an interview with the Hydrogen Council released Friday, Executive Vice Chairman Euisun Chung said the launch of multiple test beds for hydrogen-based facilities could propel the world towards a society based on the renewable fuel.

“As part of this development, we need to have discussions with international governments to jointly establish hydrogen-powered territories,” said Chung, who also serves as co-chair of the advisory body.

Established in early 2017 at the World Economic Forum, the Hydrogen Council is a global CEO-level advisory body advocating the adoption of hydrogen energy. It has 81 member companies, including BMW, Toyota and the Korea Gas Corporation.

Hyundai Motor is one of few car manufacturers globally to bet big on fuel-cell vehicles and the concept of the hydrogen economy - an initiative also pursued by the Moon Jae-in government.

Korea’s top automaker announced in 2018 it would commit 7.6 trillion won ($6.6 billion) to the technology.

Hyundai Motor is aiming for a fuel-cell vehicle production capacity of 500,000 units per year by 2030, Chung said. He expects global demand to expand to around 2 million units per year within that timeframe.

The carmaker launched the Nexo two years ago, which became the world’s first fuel-cell-based SUV.

The Nexo could travel significantly farther than its predecessor Tucson FCEV and displayed some level of autonomous driving technology.

The release of Chung’s interview comes ahead of the Hydrogen Council’s annual meeting.

The highlight of that event, Chung said, will be the outcome of research into how to attain cost competitiveness in embracing hydrogen.

“But above all, this year’s event will be highlighted by the presentation of a first-of-its-kind hydrogen cost reduction study that provides a realistic roadmap to cost competitiveness of hydrogen technologies,” Chung said. “The roadmap will also outline the steps required for such cost competitiveness to occur.”