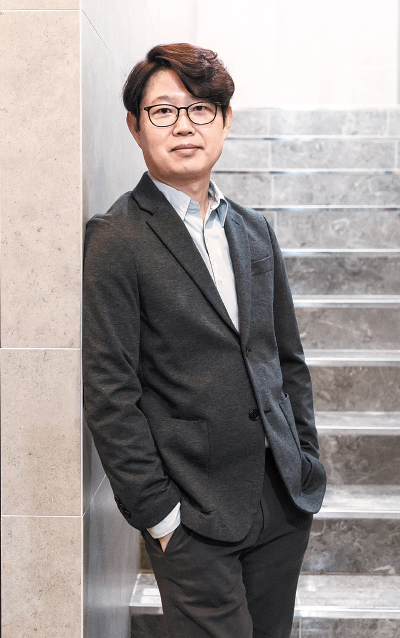 After a 10-year hiatus, director Son Jae-gon is finally returning to the big screen with his latest comedy, “Secret Zoo.” The film’s plot is adapted from a hit web comic series by the popular author HUN, whose other popular series “Secretly Greatly” also was adapted into a film starring actor Kim Soo-hyun. He played an elite North Korean spy working undercover in a South Korean town.

In “Secret Zoo,” the plot is a lot more ludicrous — Tae-soo, a lawyer working on contract, and zoo workers wear animal suits and try to deceive people.

Although the director was worried about how to bring the story to the screen, he said he was hooked by the web comic for its fresh plot.

“Since the plot was so absurd, I was already shaking my head before I read the story, doubtful that it could be accepted by the public,” the director said during a recent interview held at a cafe in Samcheong-dong, central Seoul. “But as I read over the original comic, I loved the comedy and the warmth I received [from the story].

“And it was a one-of-a-kind story. I’ve watched a lot of films and read many novels and comic books, but it’s really rare to come across one that is so unique. I’ve never imagined such a scenario, such a setting [in my whole life]. And despite its absurdness, I was naturally persuaded by [why characters had to do what they did] to save the zoo.”

However, the director tweaked the story a bit from the original. While in the comic, the zoo workers are social minorities who want to be accepted by society, in the film, the story revolves around the struggle of Tae-soo, a contract lawyer, who wants more than anything to become a permanent member of a corporate law firm.

“When I was young, the social position of a lawyer was held in high-esteem, someone who is a successful member of the society,” Son said. “But one of the scriptwriters who knew about the job told me that was no longer the case. Lawyers working on contract receive a really low pay and that itself felt new to me.”

Over the course of the film, audiences will be able to sympathize with Tae-soo’s desperation, as his character reflects the issue of high youth unemployment in Korea. 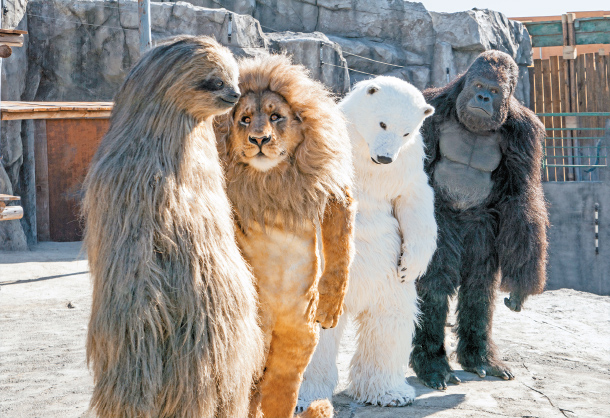 Zoo workers and Tae-soo wear their animal suits -a sloth, a lion, a polar bear and a gorilla- to attract visitors to the Dongsan Park zoo in “Secret Zoo.” [ACEMAKER MOVIEWORKS]

Although the whole idea of wearing animal suits and pretending to be animals sounds irrational, the ending could be interpreted as even more fantastical.

“Realistically, Tae-soo’s choice is a really hard one to make,” Son agreed. “Some might think that [his choice] was a foolish one, or at least a choice that will handicap the rest of his life.

“As for me, I don’t think I’ve ever made a choice feeling certain that it was the right decision. I’m always so unsure.

“Even when I’m making a film, I’m always uncertain about my choices, which may be why all of my previous films all have open endings. Maybe there were brief moments that I felt I knew how to live my life as I grew older, but for the longest time I don’t think I did.

“But I want to make the right choices, and that’s how Tae-soo felt when he had to make the decision. He might have thought long and hard about what path to take, but he wanted to at least not make a bad choice [that he would regret]. I don’t even know how he’s going to live his life after that.”

Director Son is also famous amongst actors for creating a comfortable atmosphere on set. This film was no exception. The whole cast, including Ahn Jae-hong, Kang So-ra, Jeon Yeo-bin, Kim Sung-oh and Park Young-gyu, talked about how much fun they had during filming at the movie’s press conference last month.

But the director confided that for him, filming scenes isn’t always as fun as he hopes it to be.

“For me, shooting is always a difficult process,” Son said. “But if the actors felt that [the film set] was more comfortable, it may be because I do try to create an atmosphere where actors can focus solely on their acting and not be bothered by anything else.”

Although the director debuted with “My Scary Girl” in 2006, “Secret Zoo” is only his third film. All three of his films so far have been comedies.

Many actors seem to be fans of Son’s use of humor. For instance, while Ahn mentioned that he was a huge fan of the director’s films, star Kim Hye-soo also referred to her working with Son in “Villain and Widow” as “an experience that led me to abandon fear and the stereotypes I had of comedy” at a press conference held during last year’s Bucheon International Fantastic Festival.

When asked about his philosophy of comedy, Son said that he doesn’t stick to the typical style of comic acting seen in most other local films.

“What I felt was that although the audience may enjoy that kind of slapstick comedy, it ruins the consistency in the character’s personality and plot,” Son said. “I did try to include it when I was an amateur director, but I was always dissatisfied at the end because the only purpose of such exaggerated acting was to crack people up. So every time I go into a new film, I tell the actors that they don’t have to act comically. I just want them to comprehend their characters completely and act how they feel in the moment.”

But Son hinted that his next film might be something other than comedy.

“I can’t guarantee anything though,” Son said. “There are a lot of complications involved in the film production process […] I didn’t intend for a 10-year hiatus, and I hope that I can start a new film faster than that.”

Instead of working with new actors, Son hopes that he can work with some familiar faces again.

“I think I naturally think of what other films I can do with the actors I’ve already worked with,” Son said. “I would like to work with Kang and Ahn again, and nowadays I realized how long it has been since I saw the cast from ‘My Scary Girl’ — Choi Kang-hee, Park Yong-woo and Cho Eun-ji. I would like to have the chance to work with them again.”