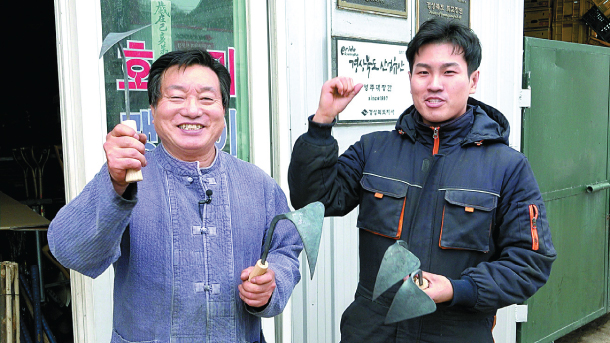 Seok No-ki, left, a blacksmith from Yeongju, North Gyeongsang, whose hand-made homi, or traditional Korean hand plows, gained worldwide popularity, and his first student, Hwang Deok-hwan, pose for a photo during an interview with the JoongAng Ilbo on Jan. 8. [WANG JUNE-YEL]

Blacksmith Seok No-ki gained worldwide notoriety in 2018 when his traditional Korean hand plows, or homi, was featured as one of the top ten gardening tools on Amazon, the largest e-commerce site in the world.

But the boom in sales for the handmade tools — more than 5,000 homi were exported all over the world as of the end of 2019 — also got Seok thinking about who would take over his craft when the time came.

Hwang, who joined the Navy as a non-commissioned officer in 2013, was discharged from it as a chief petty officer five years later. He heard about Seok’s homi when he was looking for a job last year.

According to Hwang, at first, Seok rejected to take him on as a student.

“Seok said making homi is tough work for a young man in his 20s,” Hwang said. “It took me a long time to persuade him to accept me as his student. I didn’t even get paid for the first few months — now, he pays me a monthly wage and provides me with lunch every day.”

Seok said four or five people visited him with the desire to become his student after his homi gained popularity through Youtube videos and Amazon. However, none of them lasted longer than a week.

“Even people in their 40s and 50s who went through many tough jobs couldn’t endure this work,” Seok said. “But despite my doubts, Hwang is still doing well.”

“Making homi is a path that not that many people choose to go down, and it’s also a job that I can do for the rest of my life in a field that I can continue a tradition of Korea,” Hwang said.

“I usually come to work around 7:30 a.m. in the morning and leave at 5 p.m.,” Hwang added. “After work, I communicate with my friends via social network services and go to the gym as well, just like other young people in their 20s.”

Hwang has two more years of training until he becomes a full-fledged blacksmith.

According to Hwang, his parents are still telling him to look for another job. His friends and acquaintances don’t understand his career choice either.

“You’ll never know how thrilling it is to sharpen and put an edge on a homi,” Hwang said. “I will try my best until the very end.”