President Moon Jae-in, center, and his cabinet members at the Electronics and Telecommunications Research Institute based in Daejeon, where he was briefed on the Ministry of Science and ICT’s 2020 policy plan last week. [YONHAP]

The ordering of visits was more than just symbolic. Moon’s administration sees technology as the future and wants to encourage and see results.

In a presentation on Thursday, the Science and ICT Ministry said it would increase the size of the data industry in the country to 10 trillion won ($8.6 billion) this year, up from 9 trillion last year.

The ministry said it will speed up the utilization of personal information by converging public and private data so that the Korean industries will feel a real difference after the passing of the so-called three data bills that were approved by the National Assembly on Jan. 9.

At the presentation, President Moon welcomed the passing of the three data bills.

“The three data bills that passed after a long wait will be the foundation that will develop the DNA industry,” Moon said, referring to data, network and artificial intelligence (AI). “Now we have to take a step forward toward the future.”

Since the three data bills passed the National Assembly more than a year after first being drafted, the government departments have been rolling out plans that would maximize the use of personal information in boosting fourth industrial revolution technology industry and services. 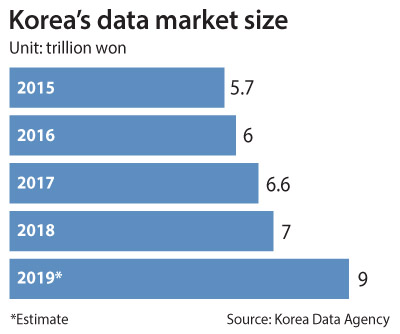 The Ministry of the Interior and Safety last week announced plans to open data to the public in supporting the development of new businesses, including those related to autonomous vehicles and AI.

Among all initiatives, those related to autonomous vehicles are targeted for the most data disclosure. The Interior and Safety Ministry will be releasing 11 categories of relevant data.

The government will be releasing eight categories of data on health care as well as six on smart cities and five on financial information.

“We expect new value to be created through the aggressive utilization of public data, which are the key assets that will determine the national competitiveness while vitalizing the data economy,” said Chin Young, the Minister of the Interior and Safety.

“Our hospitals despite having massive medical data weren’t able to utilize the information in developing medicine that would cure rare diseases or develop innovative medical equipment due to the restrictions of the law,” said Lim In-taek, director of health industry policy at the ministry.

The three bills are the Personal Information Protection Act, the Information and Communications Network Act and the Credit Information Act. They were first drafted in November 2018.

They were developed to allow for easier access to personal information, including those held by government institutions overseeing the management of data.

The Credit Information Act reforms allow concealed private information to be used for data analysis also without consent when being used for finance, statistics and research purposes.

Changing the regulations to make personal data more accessible for companies was first raised after the match between Google’s AlphaGo AI program and Korean champ Lee Se-dol in 2016. The deep learning machine won four out of the five matches.

The Korean business community started to urge the government to allow access to personal information, arguing that the data is crucial in the development of fourth industrial revolutionary technology, from AI to big data analysis.

The Korean companies have argued that the complicated process and relatively higher regulatory barriers limited the development of leading technology-based services and prevented them from competing effectively against other global companies.

Experts say data access is essential in the development of new industries, including AI, citing a recent $4 billion acquisition of Baedal Minjok by Berlin’s Delivery Hero.

Industry sources say that the Korean company was acquired in part for the data it had accumulated. It not only had information on food delivery demand but also on traffic information and the buying habits of Korean consumers.

Through these data, new business opportunities can be created.

Data is also at the center of AI-based services and products.

Although the government late last year announced its plans to create 455 trillion won of economic activity through AI by 2030, Korea is far behind advanced economies, including the United States, China and Japan.

According to the global market research company IDC, the data is expected to grow into a $260 billion market globally by 2022, up 56 percent from $166 billion in 2018.

Yet Korea is trailing behind. In a study by the Swiss-based International Institute for Management Development last year, it is ranked 10th in terms of digital competitiveness, but it is 40th when it comes to big data.

Last year Park Yong-maan, Korea Chamber of Commerce and Industry chairman, urged lawmakers to pass the three data bills, which referred the data industry as the fuel for the future.

“When the drilling of such oil is being blocked, how can we talk about the fourth industry revolution or on future industry?” Park said.

According to Yoo Jong-woo at Korea Investment and Securities, the expansion of the data industry was evidently clear at this year’s CES event.

“The data and mobile-based industry is expanding into health care, beauty and lifestyle,” Yoo said in a recent report. “Global companies such as Amazon Web Services, L’Oreal and Procter & Gamble are actively using data in its services and products, such as connected vehicle solutions, personalized beauty solutions and even smart toothbrushes.”

In the case of beauty solutions, AI offers the optimized solutions to the user by analyzing the data on the person’s facial structure, skin tone and even the weather.

Yoo said machines that were used as simple tools in inputting data have evolved and are offering customized services and products to consumers through AI built on machine learning.

The financial area is expected to significantly boost in terms of innovative services and products.

The reformed bills will allow the expansion of opening banking services.

Until now, under the Credit Information Act, sharing of client financial information was banned, whether it be banks, credit card companies or insurance companies holding the data.

As such, the customers weren’t able to centralize their financial affairs. The new law allows the personal information of an individual to be shared, so all accounts can be managed by a single platform.

Heather Kang, an analyst at Mirae Asset Daewoo, said she expects the passing of the bills will speed up the “digital transformation” of the financial industry through the utilization of big data and data convergence.

“Platform operators and fintech companies will likely evolve from being simple account aggregators to developing personal finance management services,” Kang said. “As we have seen in the cases of Tencent and Alibaba’s Ant Financial, new financial products based on data will see a significant increase, while big tech companies’ entries in the financial businesses targeting millennials and mass customers will gain momentum.”

Telecommunication companies are also likely to benefit from the legislative change.

SK Telecom already has data on shopping habits and preferences of consumers through its 11st online shopping mall and has data on subscriber locations through its T map navigation system. LG U+ has collected data on consumer energy habits through its Internet of Things solutions.

The telecommunication companies have established a system against contagious diseases in working with the Korea Centers for Disease Control and Prevention since 2015.

Not everyone is positive about the passing the reformed bills. People’s Solidarity for Participatory Democracy on Jan. 10 released a statement of protest.

In the statement, the civic group said the National Assembly’s approval of the bills will be remembered as the day when the rights on private information died.

It claimed that the passing of the bills has allowed access to the most intimate information of a person to benefit company profits.

“Even if the information accessible is limited, a person’s identity could be exposed when combining various data,” the civic group argued.

“Almost all information, including medical records, spending habits, investment patterns and income size, are being used for the profit of companies, while the right to be informed on leaks of personal information and the right to delete information are not recognized,” the civic group claimed.