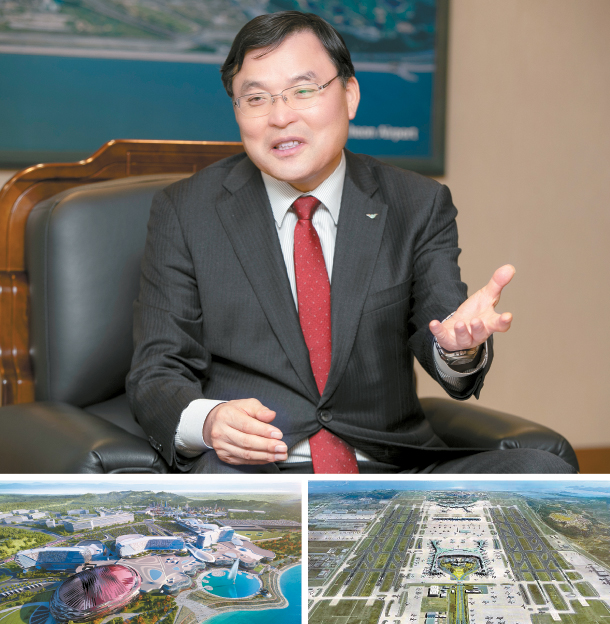 Top: Incheon International Airport Corporation President and CEO Koo Bon-hwan, in an interview with the JoongAng Ilbo, speaks about business in Indonesia. Above left: An aerial view of a resort that is scheduled to open at Incheon Airport’s International Business Center in June 2022. Above right: An aerial view of the Incheon Airport construction project. [INCHEON INTERNATIONAL AIRPORT CORPORATION, YONHAP]

The Batam Indonesia Free Trade Zone Authority kicked off the bidding process in May to select the final bidder for the expansion project by June.

Incheon International Airport Corporation hopes to secure new opportunities for local firms through the deal, which is estimated to be 540 billion won ($482 million) worth of business opportunities. The winner earns the rights to operate Batam Hang Nadim Airport for 35 years. It includes the repair and construction of the airport’s infrastructure expansion, along with management of the facilities.

“We almost crossed the bridge to winning the bid on the development of Batam Hang Nadim Airport through the consortium with Indonesia’s representative public firms,” Incheon International Airport Corporation President and CEO Koo Bon-hwan said in a Jan. 8 interview. “It will be a good starting point in expanding the territory of the aviation economy with local firms.”

Batam, located south of Singapore, is seen as an industrial boomtown and an emerging transport hub.

Born in 1960, Koo is a graduate of linguistics at Seoul National University. He held posts in the Ministry of Land, Infrastructure and Transport, handling policies on aviation.

Following are the edited excerpts from the interview.

A. For the expansion of businesses that are driving the Korean economy, like Korean culture, Korean tech and Korean food. It is also the first time for Incheon International Airport Corporation to take part in a foreign airport project. It is aiming to create an Indonesian airport that creates high value-added demand, diverting from the existing policy that merely relies on [profits earned from] passengers. Not to mention the airport, it plans to develop the surrounding areas and transform the business to center on logistics, like airline and cargo.

Because of the large population and demand. Indonesia has 260 million people and consists of around 17,000 islands. It’s a blue ocean with an explosive 10 percent annual growth within the aviation market. Batam, in particular, offers the geographic advantage of reaching Singapore by ferry in 30 minutes. That means developing areas surrounding the airport - like building hotels, resorts, tour infrastructure and distribution complexes - is easier. AP1 is a state-owned company and operates 14 airports in Indonesia, including Bali Airport.

How did you manage to get them to cooperate?

It was the result of time and effort. Since 2013, Incheon Airport has been offering management and technical support to airports in Jakarta. We also trained the workforce at AP1. The network is built when people and money are exchanged.

Though it is doing well abroad, Incheon Airport is facing threats from competitors.

It’s true that Incheon Airport is being threatened with losing its hub airport position in Northeast Asia, following the launch of Beijing Daxing International Airport last year. It’s true [Incheon Airport] can’t compete with worldwide airports just based on the number of passengers. That’s the reason we are pursuing becoming more than just an airport. We hope at least Yeongjong Island [on the west coast of Incheon] becomes a free economic zone.

Incheon Airport is a living thing and a gateway to Korea that runs 24-7, as 1,200 flights take off and land each day. Airports worldwide are transforming into the third-generation airport that combines business and high-tech industries in the surrounding areas. Incheon Airport will become a superior airport that connects the surrounding areas as the center of economic activities.