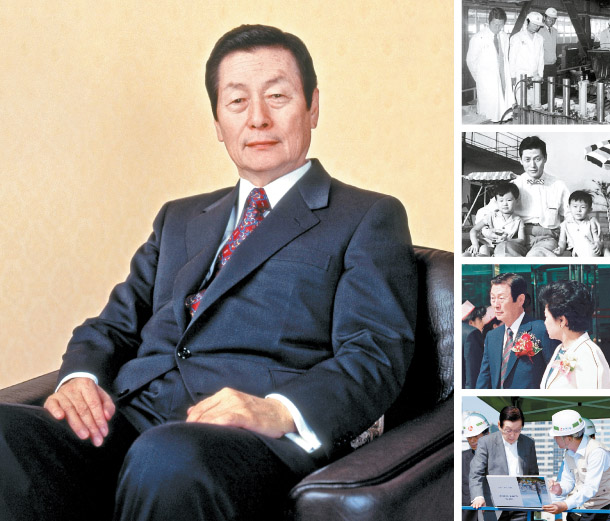 Clockwise from left: A photo of Lotte Group honorary Chairman Shin Kyuk-ho. Shin, far left, tours Lotte Confectionery’s factory in an unknown year. Shin in his early years, center, poses with his son Dong-joo, far left, and Dong-bin, far right, at his house in Tokyo. Shin, left, during the opening ceremony of Lotte Department Store’s Yeongdeungpo branch in western Seoul in 1991. Shin, left, gets briefed by an employee in 2011 on the progress of Lotte World Tower in Songpa District, southern Seoul. [LOTTE GROUP, YONHAP]

Lotte Group honorary Chairman Shin Kyuk-ho was a legendary businessman who built up a business empire in Korea and Japan, starting with bubble gum. He spoke both in Korean, which came with a strong Gyeongsang accent, and Japanese. During his long career, Shin was the object of both praise and suspicion, in both countries.

His work of a lifetime, Lotte Group, now ranks as the fifth-largest conglomerate in Korea. As a young businessman, Shin split his time between Korea and Japan. He eventually came to be more fluent in Japanese, but he never surrendered his Korean nationality. As a boss, Shin was known to be an authoritative and charismatic leader feared by staff. He was also the same man who would host a massive meal for the past residents of Dungi-ri, his hometown in Ulsan which was wiped out after a dam was built. Held the first Sunday of May, the feast was offered for 43 years.

Journey to Japan with 80 yen

Shin Kyuk-ko was born in 1921 in the village of Dungi-ri, Ulju County in Ulsan, from where the Shin family clan hailed. He was the first son among 10 children. His official birthday is Oct. 4 of the lunar calendar. Shin was from a modest family with land just enough to “leave a little after feeding the entire family,” he once said in an interview. As a boy, he walked more than 10 kilometers (6.2 miles) a day to school, but his scores weren’t top notch. His dream was to move to Japan one day and become a writer.

After graduating from a two-year course at an agricultural school, Shin headed out for Japan in 1941 with only 80 yen in his pocket. He delivered newspapers and milk until he enrolled in Waseda University’s night school majoring in chemistry.

The dream of becoming a writer never came to fruition. But Shin’s passion in literature is captured in the company’s name. Lotte is short for Charlotte, the female protagonist in the founder’s favorite book: “The Sorrows of Young Werther.” He took pride in this name, saying it was the biggest choice of his life.

The starting point of Shin’s corporate empire was bubble gum. When Lotte was formed in June 1948 with 10 employees, bubble gum was partially treated with hostility by the Japanese due to it being seen as a symbol of Western civilization. Critics cast doubt on whether the business would succeed, particularly at a time when much of the population didn’t even have money for food, let alone sweets.

Lotte’s bubble gum turned out to a huge success with customers, especially children, who would stand in long lines to get their hands on the product. The secret behind it was a balloon in each package. Lotte also held lucky draws with the packaging as the ticket.

Shin had a framed photo of Lotte Green Gum at his office on the 34th floor of Lotte Hotel’s main branch in central Seoul, a reminder of the passion and efforts of his early days. From bubble gum, Lotte extended into chocolate and biscuits and grew into one of Japan’s largest food companies. The expansion eventually jumped industries into trade and real estate. In 1988, Forbes named Shin Kyun-ho as the fourth-richest person in the world. Lotte Group currently has 95 companies and 115 trillion won ($99 billion) of assets.

In 1965, Korea and Japan signed a treaty to establish economic relations. Shin used this opportunity to open a business in Korea. His first step at Kimpo Airport, photographed and printed in Lotte’s 50-year anniversary photo book, shows a man in his 40s walking firmly with a brief case in his right hand. As soon as the treaty was inked, Shin entered Korea to devise an investment plan. Right after Lotte formed a confectionery unit in Korea, the company ran a newspaper ad emphasizing that contributing to society and the country was its corporate philosophy.

The basis of Lotte’s Korean unit was built upon Lotte Confectionery and the group’s aluminum business. From food, the conglomerate acquired Honam Petrochemical, now Lotte Chemical, and established Lotte Construction.

Long a landmark in central Seoul, the Lotte Hotel in Sogong-dong has a storied past. One tale is about iron powder that was found in Lotte gum in the 1970s. The chairman was called into the Blue House to speak with then-president Park Chung Hee. According to the story, Park made a suggestion: He would turn a blind eye on the iron powder. In return, Shin was to open a hotel in a country that barely had tourism infrastructure.

The idea of building “the highest skyscraper in Asia” in Seoul at the time was considered reckless, but this didn’t stop Shin. From the third basement floor to 38 floors above ground, Lotte Hotel took six years and $150 million to complete in 1973. It cost as much as the Gyeongbu express highway that connects Seoul and Busan. The hotel business eventually led to retail and duty-free. This cluster rode a high tide of rapid growth in the early 2000s with the first Hallyu wave.

According to Lotte Group’s 50th anniversary history book, Shin’s interest in retail and tourism were based on his judgment that they were “business sectors that can rake in foreign currency without special resources.” He also believed that once the retail industry starts flourishing, it would create a virtuous cycle of production and consumption. From this outlook came the plan to transform a part of Lotte Hotel’s land in central Seoul into a modern department store. A plan submitted in 1975 details a 10-story department store that included duty-free catering to foreign tourists.

Lotte established another major business pillar in the mid-1990s, when it merged with a score of domestic petrochemical companies that were going through radical restructuring in the aftermath of the currency crisis.

The war of Lotte brothers

Shin’s fixation on high-rise skyscrapers led to the establishment of the Lotte World Tower. The project dates back to 1988 when it was named the “second Lotte World project,” with a reference to its amusement park in Songpa District, eastern Seoul. The plan was canceled multiple times, but Shin never forgot it. The project finally received permissions in 2011 and was completed in 2017. But controversy surrounding the Lotte World Tower construction permit ignited a large-scale investigation of the entire group later on.

Chairman Shin handpicked his eldest son, Shin Dong-joo, as the official heir, but did not hand over control until the very last minute. In 2013, when his Alzheimer’s worsened, his two sons commenced battle over Lotte’s ownership, which eventually ended with Lotte Chairman Shin Dong-bin’s victory. But the family feud shed light to Lotte’s complicated corporate structure and became one of the biggest crises in the company’s history.

The honorary chairman never fully recovered his health, and he was assigned a legal guardian by the Supreme Court in 2017.