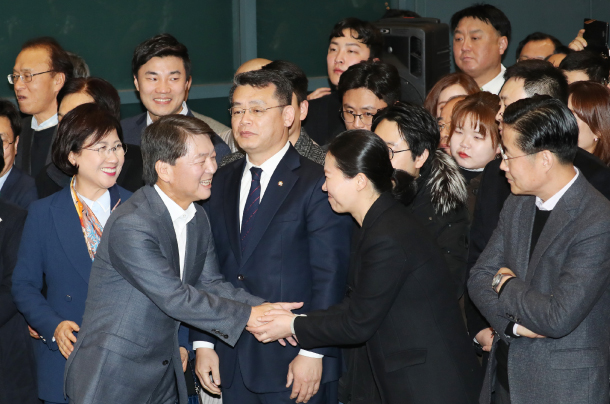 Political maverick Ahn Cheol-soo criticized the Moon Jae-in government as he ended his self-imposed exile from Korean politics Sunday, vowing to take a lead role in deterring the administration’s “reckless driving” in statecraft and policy making.

Ahn, who lost to Moon in the 2017 presidential race by coming in third, told reporters after he landed at Incheon International Airport Sunday that the nation must block “the advent of fake democracy and the privatization of authority” by “protecting the spirit of the constitution,” creating a fair and safe society and developing a dynamic market economy through “regulation reforms.”

To achieve those goals, Ahn vowed to create “a practical, moderate political party” that surpasses the conventional right and left, a party that “focuses on really solving problems and making changes in the world while refusing to be obsessed only with the ideal thought of practicality.”

Ahn said he had no intention to run in the April general election and stressed he wasn’t interested in a possible merger between conservative parties.

For weeks, local media outlets and politicians have wondered what steps Ahn would take ahead of the April 15 election - and how they would affect the political landscape here - after Ahn announced through Facebook on Jan. 2 that he was coming home.

In the post, Ahn said it was time for him to return and consult with the public how he should “change” Korean politics and “how the country can advance to the future.”

Ahn, who previously worked as a doctor, medical professor and software entrepreneur, entered politics in 2011 with delirious support from Korea’s younger voters. He ran in the 2012 presidential election but ended up withdrawing and then vied for a second chance in the 2017 race, finishing in third place. After a humiliating defeat in the Seoul mayoral election of June 2018, in which he again placed third, Ahn left politics the following month for a “time of reflection and learning.”

In late 2018, he left to study in Germany, after which he traveled to the United States for a visiting scholarship at Stanford University.

Ahn created the People’s Party, a predecessor of the Bareunmirae Party, in 2016, which won 38 seats in the general election later that year, becoming the third-largest political group. At the time, Ahn said voters were fed up with the ways of the two largest parties and the time had come for an alternative. The People’s Party later merged with the Bareun Party to form the current Bareunmirae Party.

After those two visits, the aides said Ahn will likely visit his in-laws in Yeosu, South Jeolla, and Busan, his hometown.