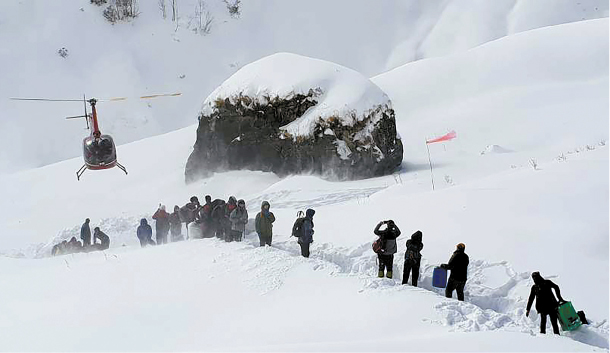 A helicopter conducts search and rescue operations for missing Korean and Nepali trekkers at a base camp at Mount Annapurna in the Nepali Himalayas on Saturday. Four Korean teachers and two Sherpa guides went missing after an avalanche Friday. [YONHAP]

Search efforts to locate six trekkers - including four Korean teachers - who went missing in the Nepali Himalayas after an avalanche on Friday have failed as heavy snowfall threatens to hamper the pursuit, said the Korean Foreign Ministry on Sunday.

The four Koreans and two Nepali guides were lost in the Deurali area - around 3,230 meters (10,597 feet) above sea level - on the Annapurna trekking circuit after an avalanche at around 10:30 a.m. to 11:00 a.m. in Nepal, according to the ministry.

The South Chungcheong Office of Education said the Korean victims - two men and two women whose ages range from 37 to 59 - were volunteer teachers who were on a two-week community service mission from Jan. 13 to 25 in Kathmandu, Nepal, along with seven others. They were 11 teachers from different elementary and middle schools in South Chungcheong who worked with children in local schools in Kathmandu.

Nine of the teachers in the group chose to spend Friday and the weekend trekking near the base camp of the well-known Mount Annapurna, said an office spokesperson.

The trekkers had nearly reached Deurali when bad weather conditions forced them to turn back. The six victims were heading down the mountain first, followed by the other five teachers and their guides, when an avalanche suddenly swept away the vanguard. After witnessing the accident, the Sherpas guiding the other five teachers led the rest back to a nearby safe place, according to the spokesperson.

A Korean Foreign Ministry official said Nepali authorities mounted a search party on Saturday that included a helicopter and a police rescue team to scour the area on Saturday but were unable to find the victims due to heavy snowfall that began that afternoon.

The Korean Embassy in Nepal dispatched a consular officer from Kathmandu to Pokhara, a city located around 200 kilometers (124 miles) from the accident site. Yet four to five meters of snow covered the search area as a result of the heavy snow, and the possibility of another avalanche hampered search efforts, the official added.

Annapurna is the world’s 10th-highest peak and is one of the most dangerous mountains in the world to climb, though the conservation area surrounding the mountain is the most popular destination for foreign trekkers in Nepal. In 2014, a snowstorm led to 43 deaths on and around Annapurna, becoming the worst climbing disaster in the country’s history.

The group that met the accident on Friday was the third and final group of 39 teachers sent by the South Chungcheong Office of Education to Nepal this year as part of a regular community service project conducted since 2012. Korean teachers help build schools and donate school materials and clothing to local children.

The teachers who were part of a preceding group who stayed in Nepal from Jan. 6 to 17, returned to Seoul on Sunday.

“We had no idea that the [area we hiked in] was accident-prone, since it was a path that regular elementary school teachers could hike in,” said a returning member of the mission, who said her group also undertook the Annapurna trek without any problem. “All the teachers [who took part] are in shock.”

The Ministry of Foreign Affairs said two of its officials would be leaving for Nepal on Sunday to support the search. The South Chungcheong Education Office sent two of its own officials, along with six family members of the victims, to Kathmandu on early Saturday morning.

Korean President Moon Jae-in also posted a message of support and condolence on social media on Sunday, saying he hoped for a swift rescue of the missing teachers and guides and that the government would provide all necessary support in coordination with Nepali authorities.

Friday’s accident marks the second time Koreans have been victims of a mountaineering accident in Nepal over the past two years. In October 2018, five Korean climbers and four Nepali guides were killed by a snowstorm on Mount Gurja in the deadliest accident in Nepal’s alpine industry since 2015.