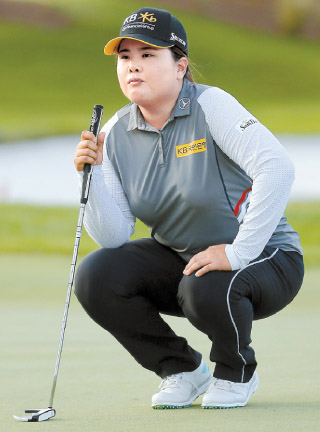 Park In-bee reads the line of her putt during the final round of the Diamond Resorts Tournament of Champions at Tranquilo Golf Course in Florida. [GETTY IMAGES/YONHAP]

The LPGA Hall of Famer was eliminated in the third playoff hole at the Diamond Resorts Tournament of Champions in Lake Buena Vista, Florida, on Sunday, after pulling her tee shot into the water.

Gaby Lopez of Mexico and Nasa Hataoka of Japan were still tied after five playoff holes, when play was suspended due to darkness. The winner had not been finalized as of press time.

Park blew a two-stroke final round lead to fall into the playoff at Four Seasons Golf and Sports Club Orlando, and Park, Lopez and Hataoka all finished their 72 holes at 13-under 271.

Park was trying to pick up her 20th career LPGA win and her first title since March 2018.

Park shot an even 71 in the final round, the first time she failed to break 70 in the tournament. Lopez had a bogey-free round of 66, and Hataoka had four birdies against one bogey to join the two others.

In the playoff, the three players all had pars on their first two trips to the 18th and went back to the par-3 hole for the third time.

And after Lopez and Hataoka put their tee shots short of the green, Park sent hers to the left side of the green, and the ball bounced into the pond.

Park took a penalty stroke and hit another tee shot that landed past the green. She didn’t even get a chance to putt out, as the two other players finished with pars.

“I didn’t think it was that bad of a shot. It just tailed a bit at the end,” Park told a television interview afterward.

Park made her first birdie of the day at the eighth to reach 12-under, but by then, Hataoka, playing in a group ahead of Park, had closed to within one stroke.

While Park had a string of seven straight pars, Hataoka moved ahead with consecutive birdies at the 12th and 13th that took her to 13-under.

Two groups in front of Hataoka, Lopez caught fire on the back nine. The Mexican took the club house lead at 13-under with a birdie at the par-3 18th, the only birdie on that 197-yard hole in the entire field Sunday.

Lopez was soon joined at 13-under by Park and Hataoka. Park was the first to blink, with her errant tee shot on the third trip to the 18th, and Lopez and Hataoka couldn’t break the tie even after playing that hole two more times.

This is the earliest start to a season for Park since 2016. She has opened recent seasons in late February or early March, but Park decided to jump right into the action this year, as she hopes to qualify for the Tokyo Olympics this summer.