Team Korea just one win away from Olympics

Team Korea just one win away from Olympics

It’s taken two last-gasp goals to get them this far, and Team Korea now finds itself just one win away from qualifying for the 2020 Olympic men’s football tournament. 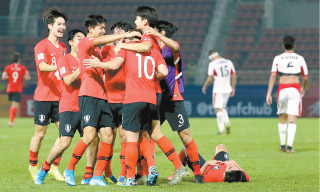 The Korean national football team celebrates after defeating Jordan 2-1 in the quarterfinals at the Asian Football Confederation U-23 Championship at Thammasat Stadium in Rangsit, Thailand, on Sunday. [YONHAP]

Korea will take on Australia in the semifinals of the Asian Football Confederation (AFC) U-23 Championship at Thammasat Stadium in Rangsit, Thailand, on Wednesday.

This tournament is also the qualifying event for the 2020 Tokyo Olympics, and the top three teams will get to play in the quadrennial competition. The two winners of the semifinals - Uzbekistan will face Saudi Arabia in the other match on Wednesday - will both earn their tickets to Tokyo, and the two semifinal losers will clash in the third place match on Saturday for the last remaining Olympic berth.

Korea is chasing its ninth straight Olympic appearance, dating back to 1988 in Seoul.

Coached by Kim Hak-bum, Korea has reeled off four straight victories, with three in the group stage and one in the knockouts so far. It is the only nation with four wins in the tournament.

Dramatic finishes have bookended those victories so far. Korea opened its group stage with a 1-0 victory over China on Jan. 9, with second half sub Lee Dong-jun netting the winning goal just seconds away from what would have been an embarrassing draw against the heavy underdogs.

Then in the quarterfinals on Sunday, Lee Dong-gyeong, also coming off the bench, scored a last-second free kick goal to lift Korea past Jordan 2-1. Lee drew a foul just outside the box and did a fine job selling the call, as he fell to the ground on relatively soft contact from Ibrahim Sadeh. Lee took the ensuing kick himself and curled it off the right post for the thrilling victory.

If Korea hadn’t beaten China to start the tournament, who knows how different the morale would have been for this collection of inexperienced players? Perhaps it wouldn’t have come out with the same amount of exuberance and energy in its next two group matches against Iran and Uzbekistan.

And without the free kick goal on Sunday, Korea and Jordan would have gone into extra time, with the pendulum having swung in Jordan’s direction in the second half due to some defensive breakdowns by Korea.

As well as Korea has played in good chunks of the tournament so far, there’s little question it has had some luck in their favor, too.

But as they say, you have to be lucky to be good sometimes.

When it comes to his constant lineup shuffling, coach Kim also appears to have enjoyed his fair share of luck, though the veteran tactician would argue that he’s been blessed with a deep team and his players have responded well to his unusual usage patterns.

Kim has yet to deploy the same starting lineup in consecutive matches. Goalkeeper Song Bum-keun is the only Korean to have started in all four matches so far, and Kim has replaced anywhere between six and eight members of his starting 11 from one match to the next.

On the attacking front, in particular, players who have been shuffled in and out have come through when they made it to the starting lineup.

Forwards Cho Gue-sung and Oh Se-hun have taken turns in making starts, with Oh coming off the bench in the second half on Sunday to join Cho on offense. After Oh was held scoreless against China, Cho got the start ahead of him and scored once against Iran. The coach went back to Oh as his starting striker, and Oh netted two goals against Uzbekistan.

Cho returned to the starting lineup against Jordan and headed in the team’s first goal.

Cho and Oh, who have been roommates since pre-tournament training camp last month, are tied for the team lead with two goals. Trying to decide which one to start against Australia is a first world problem for Kim, who may opt for Oh if his alternating pattern holds.

Kim, who said after Sunday’s win that he wasn’t pleased with his team’s defensive effort, gave the team a day off on Monday. Instead of hitting the ground, the players will stay in the team hotel to do their recovery work at the gym or swimming pool.

Korea also had an off day after beating Uzbekistan to close out the group stage last Wednesday.