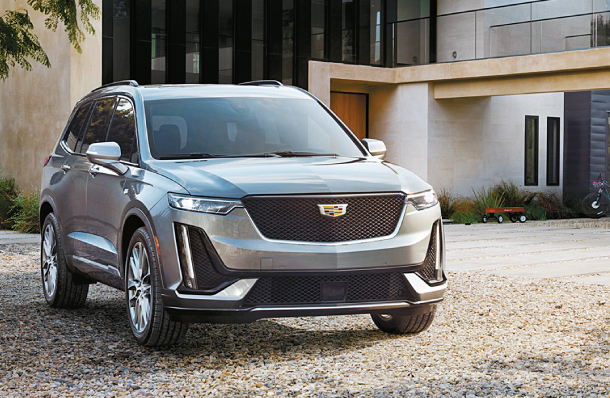 The Cadillac XT6 SUV, which is expected in the first half of this year. The seven-seater SUV will likely compete against the Palisade, the Mohave the Master, the Traverse and the GV80 in the Korean market. [CADILLAC KOREA]

Cadillac is introducing four new models and one face-lifted version in Korea this year as it works to bounce back from a disappointing 2019.

Three of the five are SUVs, as the brand follows the global trend that favors SUV makers.

The local unit of the luxury vehicle division of General Motors announced Monday that it is going to release a new XT6 SUV, a face-lifted version of the XT5, and new CT4 and CT5 sedans in the first half.

The large-size XT6 SUV is expected to compete with the Hyundai Motor Palisade, the Mohave the Master from Kia Motors, GM Korea’s Traverse and the Genesis GV80.

The face-lift for the XT5 is expected to involve the addition of safety and convenience features.

The new CT4 and CT5 sedans will come with better connectivity and mobility technologies and are expected to fill out Cadillac Korea’s major sedan segment.

In the second half, Cadillac Korea said it will add a new XT4 mid-size SUV to target younger consumers looking for luxury. The introduction of the XT4 completes Cadillac Korea’s SUV lineup, which currently includes the XT6, XT5 and Escalade.

By introducing the five new vehicle options to Korean consumers, Cadillac Korea said it expects a better year in terms of sales, as the lack of new models hindered its success in the local market last year.

Although Cadillac Korea sold a record 1,050 vehicles between January and July last year, it lost momentum in the second half.

Cadillac Korea added that it will open three more maintenance service centers in the country after opening one last week in Pangyo, Gyeonggi, while modifying its brand strategy to better appeal to younger consumers.