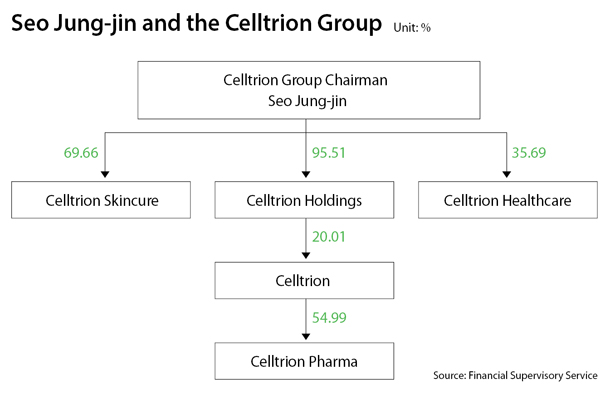 Or was it a trial balloon?

To the surprise of many, including executives of the group’s operating companies, Seo Jung-jin said that he was considering a consolidation of three Celltrion units: Celltrion Inc., Celltrion Pharma and Celltrion Healthcare.

The combination would create Korea’s third largest publicly-traded company and could increase Seo’s control as a shareholder.

“I’m ready to start merging the three biopharmaceutical affiliates of the group as early as next year, if that’s what shareholders want,” said the Celltrion Group chairman during a follow-up Q. and A. session after his presentation Wednesday at this year’s J.P. Morgan Healthcare Conference held in San Francisco.

This means that the merger will create a behemoth, with a value nearing 30 trillion won. It could become the third largest company on the Korea Exchange, after Samsung Electronics and SK Hynix.

The merger would create the largest all-around biopharmaceutical company in Korea, in line with Seo’s long-term strategy.

The new entity may also be one of the 30 largest pharmaceutical companies in the world and similar in size to Japan’s Astellas Pharma.

The announcement came as a surprise for many, as not even Celltrion’s media and investor relations teams were aware that Seo was going to speak of the matter. But the consolidation has been mentioned by investors since at least 2017, when Celltrion Healthcare was preparing for its initial public offering.

Shortly after Seo made the announcement, the Korea Exchange requested Celltrion explain the chairman’s comments and set a Friday deadline. Celltrion responded by saying the idea has been under review, but “no details have been set so far.”

Seo has stressed that the merger will be beneficial to investors, as he projects the operating profit margin for the combined entity to remain at least at 50 percent.

Analysts say that Seo may have been testing the idea on investors. They seemed impressed.

After Seo made the comments Wednesday in San Francisco, the share price of Celltrion Inc. rose 2.27 percent by the end of Thursday in Korean trading. Shares of Celltrion Healthcare added 5.96 percent, while Celltrion Pharma shares skyrocketed 19.32 percent.

The deal could help the company put accusations of unfair business practices behind it.

Given the structure of the group - with Celltrion Inc developing and producing drugs, Celltrion Pharma in charge of making synthetic drugs and Celltrion Healthcare responsible for overseas distribution - related party transactions are common.

A merger would eliminate the possibility of penalties of this sort, as all transactions would be within the books of one company.

The merger also fits well with the companies’ ambitions, especially its plans for foreign expansion and a boost of profit levels. Celltrion Group is planning to broaden its portfolio by rolling out vaccines, insulin, more biosimilars and novel drugs while opening new manufacturing plants in China and Korea.

Seo added that Celltrion will also reach a decision by the end of the year whether to either purchase a syringe manufacturing company or form one itself to enter the diabetes treatment market by 2023.

In an interview with reporters Tuesday, Seo said he is stepping down from the board by Dec. 31 with one of his two sons replacing him as chairman.

If the merger occurs as Seo envisions, the chairman’s stake in the new entity will likely be higher than his current stake in Celltrion Inc.

The merger is also expected to increase the percentage of ownership of Ion Investments, a subsidiary of Singapore’s government-owned Temasek Holdings, which made large investments in Celltrion even during its early and difficult years.

As of the end of the third quarter last year, Ion Investments had 9.53 percent share of Celltrion and 9.37 percent of Celltrion Healthcare.