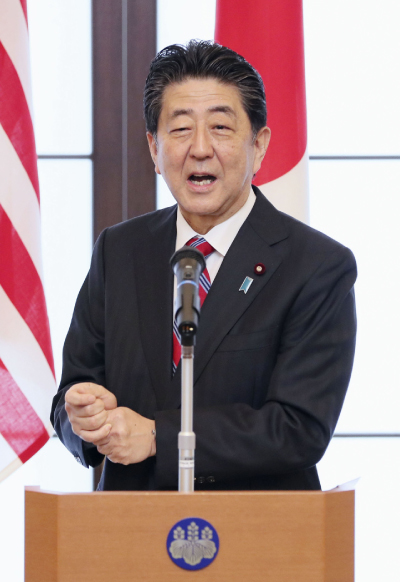 Japanese Prime Minister Shinzo Abe said Monday South Korea is “a very crucial neighbor” for Japan that shares “basic values and strategic interests,” stressing he wishes both countries strengthen bilateral ties in a “future-forward way” while keeping promises made between each other.

Abe’s latest annual policy speech to parliament made several positive mentions of Seoul, starkly contradicting his address from a year earlier when the prime minister refused to utter anything about Japan-South Korea relations as tensions peaked over the latter’s Supreme Court rulings on the wartime forced labor issue.

Last year, Abe referred to South Korea only once, when he said Japan would cooperate with the international society, “including the United States and South Korea,” to improve Japan-North Korea ties. Abe later told Japanese media he didn’t raise South-Japan relations because he didn’t want to get involved in another diplomatic feud between Seoul.

This year, Abe called out South Korea before Russia and China while talking about the importance of solidifying diplomatic ties with neighbor countries, and expressed hope for moving toward a brighter future with Seoul.

Abe, however, underscored that South Korea needs to keep promises between Japan, pressuring Seoul to abide by the 1965 bilateral claims agreement, which Tokyo asserts finalized the forced labor issue, as well as the 2015 comfort women deal.

On relations between North Korea, Abe expressed his desire to meet North Korean leader Kim Jong-un “without any preconditions” in order to solve the issue of repatriating Japanese nationals kidnapped by the North.

With the 2020 Tokyo Summer Olympics around the corner, some Japanese diplomatic analysts said Abe possibly spoke softly about South Korea Monday so as not to provoke any new beef - or perhaps because he wants to get the forced labor issue over with before South Korea liquidates seized assets of Japanese companies here.

A high-level Japanese government official exclusively told the JoongAng Ilbo in a telephone interview Sunday that Tokyo wishes to start discussions between Seoul on resolving the forced labor issue based on a recent proposal made by Korea’s National Assembly Speaker Moon Hee-sang.

Last December, Moon submitted a so-called one-plus-one bill to the Korean parliament, proposing to create a foundation made up of voluntary contributions by Korean and Japanese companies and members of the public to compensate up to 1,500 Korean victims of forced labor.

The bill, however, has largely received mixed responses and criticism from the public and activists here, who say that it only focuses on the compensation aspect rather than a true apology. The Blue House has never publicly mentioned its stance on the idea.

The high-level Japanese government source said the Blue House’s silence was irritating Tokyo, which has optimistic views about the plan, though Abe hasn’t publicly made clear his stance, either.

“Right now, we have no other choice but to discuss the [forced labor] issue based on the Moon Hee-sang plan, but the South Korean government isn’t informing us of its thoughts about it at all,” said the Japanese official. “I hope the Korean government tells us its stance, at least through a behind-the-scenes communication channel.”

Asked how Abe’s office was perceiving the fund proposition, the source said Abe was mostly remaining cautious and tight-lipped about it because Seoul has a track record “reneging on past agreements,” but that some others like Takaya Imai, Abe’s executive secretary, are “very open” to it and “highly interested” in Seoul’s follow-up measures.