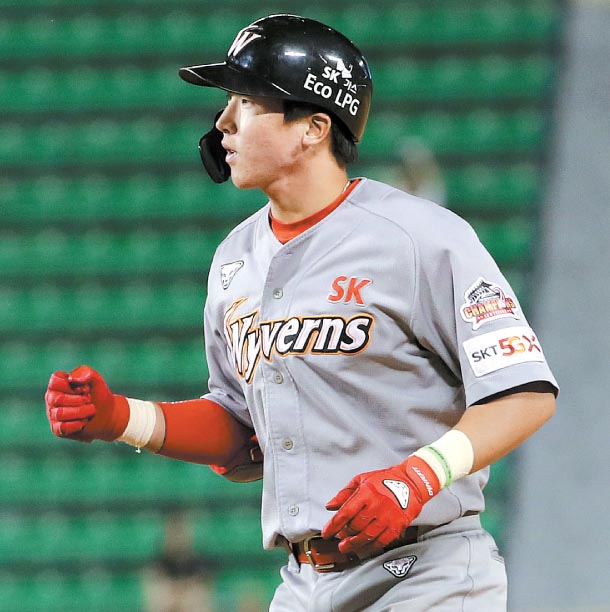 SK Wyverns’ infielder Choi Hang hopes to make a comeback in the 2020 season and make his name known, rather than being known as Choi Jeong?#175;s younger brother.[NEWS1]

SK Wyverns’ infielder Choi Hang is more than determined to bounce back and prove himself on the field this year.

He first gained recognition because of his older brother, Wyverns’ slugger Choi Jeong. Choi Jeong is the Wyverns’ starting third baseman and a slugger who also earned a spot on the national team as Team Korea’s third baseman thanks to his notable performance.

Following his brother’s success, Choi Hang also joined the Wyverns in 2012 and has been making appearances on the field since 2017. The brothers quickly gained recognition in the KBO by playing together on the same team.

Choi also followed his brother’s footsteps all the way to Guam for his personal training, but then this year, and for the first time in his career, he decided to train separately and is currently in Korea training at the Munhak Baseball Stadium in Incheon. The younger Choi said he reached this decision because he felt it might be better for him to prepare for the season according to his own goals, rather than having a similar training schedule to his already successful brother.

Looking back at his career, the 2019 season has been the toughest one yet.

When he made his KBO debut in 2017, he didn’t play in many games, only 37, but still managed to leave an impression with a 0.321 batting average. He earned a lot more playing time in 2018 by playing in 98 games and finishing with a 0.293 batting average with seven home runs and 35 RBIs.

Following a pretty satisfactory 2018 season, Choi Hang was aiming for an even better 2019 season to secure his spot as the Wyverns’ starting second baseman. Because of his preparation and hard work, he believed he was fully prepared for the season and was confident his hard work would pay off.

But things didn’t go as expected. Instead of securing his spot, he only got to play in 52 games and finished the season with a disappointing 0.228 batting average with no home runs and 14 RBIs.

“It was really hard once I realized that all my hard work and preparation wouldn’t always pay off,” Choi said.

Below are edited excerpts from an Ilgan Sports interview with Choi.

Q. You’ve always joined your brother training overseas, but this year you decided to stay here by yourself. Why?

A. There was a [training] program that I wanted to try. There’s a set training schedule set in Guam so I stayed [here] because I wanted to prepare something individually.

You decided to stay here by yourself. Why?

Well, I’ll have to prepare my body first. As Lee Ji-poong, the new training coach, joined [our team], he’s been helping me in my training. I’m doing other training as well, but it’s hard to say what it is right now. Most of the players seem to be having positive responses under [training coach Lee] and are following his program well.

It looks like you really want to prepare for this season well, more than any other season. Is that true?

I’ve always had those feelings, but now I think it’s important how I untangle them. No matter how much I prepare [for the season], sometimes it can’t be seen on the field. I think it comes down to whether I have the ability to get through the problem or not, when I face it.

Does that mean you weren’t able to perform as well as you wanted despite all your preparation last season?

Right. It’s really difficult when something that I thought would work, doesn’t. I prepared well and thought that I’d be able to see results, but I didn’t. It wasn’t an easy year. I really thought about the areas that I failed in and have set my direction to avoid repeating that.

Is that why you’re trying something different this year?

I guess it is somewhat like that. Last season was disappointing, and my biggest regret was not sticking to one plan. Since I was being rushed psychologically, I told myself to keep trying different things. As a result of that, my performance got worse. This year, I want to minimize the trial and error.

Between offense and defense, which area are you putting more focus on?

Opportunity is something that I need to create. Focusing on one thing more than the other won’t necessarily mean that I do better. I focused on defense last season, but [on the field] I seemed to be unstable, so I was even more disappointed. This year, rather than shifting my focus to one side, I think I need to focus on all areas.

You seemed to have gone through a lot last season. Are you O.K.?

Before [last season] I just had a simple goal, “to play baseball well.” But [in 2019] I felt that no matter how much I care, baseball was something that doesn’t always turn out the way I want. Up until 2018, I somewhat felt like my hard work was paying off and slowly meeting up to my expectations. But once I reached a certain point, I wasn’t getting back the same reward as the amount of effort I put in. Once I found out that concentration and the amount of training I do doesn’t always lead to success, it was hard to maintain a healthy mental state.

A lot of the players have their time of struggle, and once they get through it, they finally reach the peak of their careers. Do you also believe in that?

I believe that I’m still in the process of preparing and will face more tough situations. I think the rest of my career as a professional baseball player will come down to whether I can break out of that shell or not. Even if it’s not this year, I need to be patient and think that I can get a step further and strengthen myself, because I never know when I’ll be able to prove my ability.

You probably have a different mindset ahead of this season. How do you feel?