A peek inside the brain of pop megastar Halsey: The singer on her album ‘Manic’ and working with K-pop superstars BTS

A peek inside the brain of pop megastar Halsey: The singer on her album ‘Manic’ and working with K-pop superstars BTS 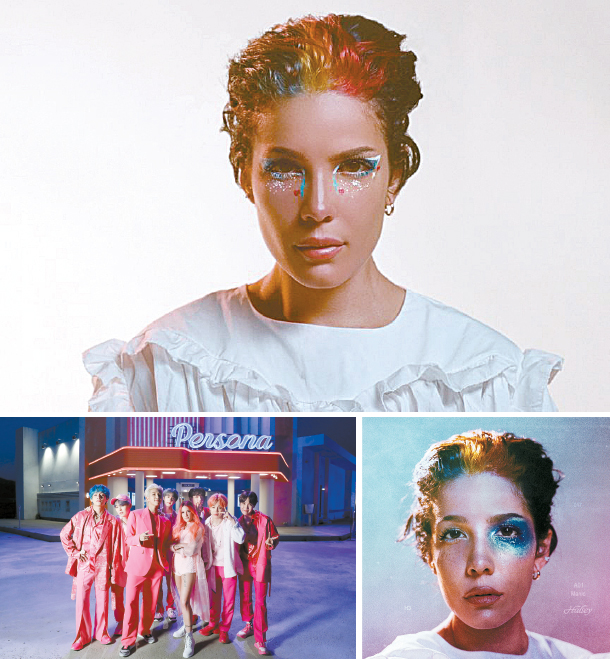 Singer Halsey, top, will visit Korea for the first time in two years on May 9, for a concert at Olympic Hall, southern Seoul. Halsey is best known to the Korean audience for her collaboration with BTS for its 2019 hit “Boy With Luv,” above left. She released her third full-length album “Manic” on Jan. 17, featuring 16 tracks, above right. [LIVE NATION, BIG HIT ENTERTAINMENT, UNIVERSAL MUSIC]

Halsey may have made her name familiar to most Korean music fans through her collaboration with BTS for their 2019 hit “Boy With Luv,” but the sugar-coated sweetness from that song is not what you can expect to hear on her latest album “Manic.” The brave, outspoken singer who confronts not only her own fears but those of others returns to Korea on May 9 for a solo concert at the Olympic Hall in Olympic Park, southern Seoul, for the first time in two years.

Before she made her debut in 2015 with “Badlands,” Halsey had already established fans online through the videos of her singing her own songs and covers of other singers that she posted on various platforms. So it was no surprise when her debut album landed at No. 2 on the Billboard 200 albums chart, after which she broadened her horizons through collaborations with Justin Bieber, The Chainsmokers and Imagine Dragons. Her 2017 album “Hopeless Fountain Kingdom” topped the Billboard album chart immediately after its release.

Halsey released her third full-length album “Manic” on Jan. 17. The album features 16 tracks, showing a side of herself that the singer hasn’t shown thus far. Her unique voice could be heard in some of the biggest hits of the past few years, but had mostly highlighted her softer, more tender side rather than the untamed thoughts she had within herself. With “Manic,” however, she’s not afraid to fight against the things that chain her down as a singer or a woman.

“For me, it was about writing about this hectic time in my life where I’m feeling so many emotions, and I’m in my 20s and I’m making mistakes and now they have more consequences now because I’m older,” she said.

“I’m looking for true love in the world. I’m figuring out who I am as a person, as an individual, so every time I change my mind, it felt right to have the album changed as well. So the album has many different sounds, many different stories and reflects that indecisive mindset that I felt like I was in where ‘it’s country!’ ‘it’s pop!’ ‘it’s electronic!’ so many things.”

Halsey answered questions from the Korea JoongAng Daily via email prior to her upcoming concert this spring. The following are edited excerpts from her responses.

Q. Your new album “Manic” is out now. How do you feel?

A. I’m so excited. This is my biggest global release of an album ever. I have more stans all over the world than I ever have. So, it’s so overwhelming and humbling to know that they are going to have this little peek inside my head.

Where, what and who do you get inspired the most by when making music?

A lot of people I meet have an impact on the music I write. Also, my fans. A lot of them are my age, so it’s nice to think about what they’re going through and what I’m going through [and how that all] intertwines or crosses together.

In some interviews, you said there were some rough times for you in the past. How has it influenced your music? What message do you want to give through your music?

I just want everyone to know that no matter how bad it gets, it always gets better. And, it’s okay to not know who you are. It’s okay to take time to figure it out and to try different things. And you’re going to try some embarrassing things, some things that work, and you’re going to learn a lot of lessons. We live in a world where everything looks so perfect on social media. If I make music for young people right now, I want to show them the process of growing up and figuring out who you are isn’t as always as beautiful as it looks to be. Sometimes, it’s more complicated than that.

You have collaborated with artists like Justin Bieber, The Chainsmokers and BTS. How do you feel about these collaborations?

It’s really fun for me because it lets me experiment with a sound before I decide if I want to do it for myself or not. I worked with Justin Bieber or The Chainsmokers before I had ever started making pop music for the radio. So, when I did it with them, it kinda prepared me. It also does a lot of different things. I’m featured on Post Malone’s album with Future. I never thought me, Future and Post Malone would have a song together. It lets me pick on a new personality, and I become a different kind of Halsey.

Working with BTS was one of the best experiences of my life. They are so kind and so smart and so talented. I got to have so many new friends. I flew to Korea to film the music video for “Boy With Luv” and got to spend some time there, which was amazing, and see how they work and how they make music video, how dedicated they are to dancing and making sure everything is perfect. It definitely inspired me to maintain that kind of dedication with my art as well. And obviously, I got to know all of them individually, their own personalities and interests.

That’s how I ended up having Suga on the album. Because his solo music really spoke to me. The music was a lot about really personal times and dark side, the confusing life of being a musician you are and to go on as a person accepting that. And when I heard [“Agust D.”], in my heart I knew I wanted to have Suga on my album. I think maybe a lot of people expected me to collaborate with another member. Maybe someone who has a voice that’s airy like mine or maybe with RM because he speaks a lot English, but for me, I always knew it had to be Suga because he was so perfect for it. So I was so happy to have him.

Do you have any artists in mind you hope to collaborate with?

I have a lot of upcoming collaborations this year that will be coming out which is really exciting, but there’s still a lot of people on my wish list. I really want to do a song with Drake. That’s a wish list for me. I like Shawn Mendes a lot. He is the nicest guy. I really wanna branch out into some up-and-coming artists as well because there’s so many people who took a chance on me when I was starting out. I would like to do the same for someone young and new and who I think is amazing. So I’m looking for the perfect person.

You have lots of female fans in Korea, and a majority of these fans are in their teens and 20s. What message do you want to give to these young female fans?

Mostly, just that growing up is hard, especially when you’re a young woman. Be brave and be kind to yourself. Don’t be too hard on yourself. There’s a lot of pressure to be perfect, and that pressure is not real. You are allowed to make mistakes and even when you feel like the entire world is completely crashing down, you’ll always find your way through. In my experience, I am becoming a better, smarter, kinder adult because of the chances that I took on betting on myself and believing in myself as a young woman. So I’d say the same to them.

You just announced your upcoming show in May. It will be you second time performing in Korea. How do you feel? Do you remember what you felt like during your first concert?

Yeah! Yes, I do. I was so nervous. It was a long time before I collaborated with BTS and I was nervous that nobody was going to come, or knew who I was. Instead, we played a really amazing show. There was a couple of thousand people there, I think 2,500, maybe more. Everyone knew all the words. Everyone had signs, and really cool makeup and dressed really cool. I got to meet a bunch of fans. I was so moved by my time. It really, really, really touched me. It’s part of the reason I have so much love for Korea and for my Korean fans. Now, it’s a whole other thing and I have more fans there. I have three albums instead of two. So, I can only imagine what the next show will be like. I really hope to impress them.

Do you have any last words you want to say to your Korean fans?

Just that I love them so much and I am so blown away and honor the way they embraced me over the past couple of years. I have so much more to give to them, and so much more to say.