Celltrion to spend $520 million on big factory in Wuhan

Celltrion to spend $520 million on big factory in Wuhan 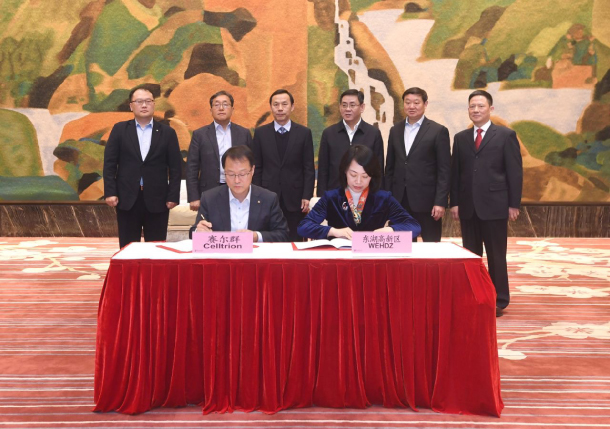 Celltrion Group is spending more than 600 billion won ($520 million) over the next five years to build the largest biopharmaceutical manufacturing plant in China.

The Korean biopharmaceutical group announced in a statement Tuesday that it signed an agreement with the city government of Wuhan and Hubei provincial government to build the plant.

It will be the first production base for Celltrion in China, the second-largest pharmaceutical market in the world.

The facility will be used to produce Celltrion’s biopharmaceutical products and for contract manufacturing organization (CMO) projects, which is what making drugs for other companies is called in the pharmaceutical industry.

Celltrion Group is also establishing a local subsidiary in the area and plans to set up a direct sales network within the country.

The 600 billion won will come from Celltrion Group’s cash flow and additional investments from other entities.

“China is a market with high demand for high-quality pharmaceutical products and is the second-largest market in the world,” said Celltrion Group Vice Chairman Gi Woo-seong in a statement.

“As Celltrion Group made its entrance to the Chinese market without any collaboration, we will concentrate all our efforts to quickly provide world-class biosimilar products to Chinese patients.”

The Chinese government has encouraged the launch of biosimilar products in the country by foreign companies.

Celltrion said it chose Wuhan as the site for its new plant as the city is becoming the center of the biopharmaceutical industry in China. The city is home to more than 300 research and development centers and companies in the industry.

A Celltrion Group spokesperson said an earlier plan to set up a joint venture named Vcell Healthcare with Hong Kong-based Nan Fung Group in China has been abandoned.

That joint venture was originally given the exclusive right to develop, manufacture and commercialize three biosimilar products - Remsima, Truxima and Herzuma - in the Chinese market. The spokesperson added there is no plan at the moment for another partnership with Nan Fung Group.