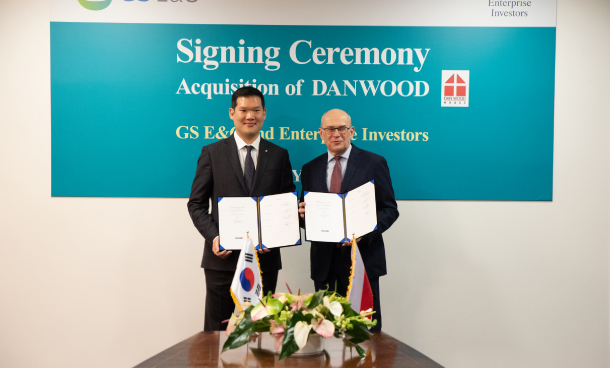 Huh Yoon-hong, president of new business at GS E&C, left, and Jacek Siwicki, the president of Danwood parent company Enterprise Investor, at an event held at Danwood headquarters in Białystok, Poland, to celebrate the acquisition deal on Monday. [GS E&C]

GS Engineering & Construction (GS E&C) on Tuesday continued a string of planned acquisitions as it moves to expand its footprint abroad, finalizing a deal to purchase a Poland-based prefabricated home manufacturer.

The Korean construction firm signed the 180 billion won ($160.7 million) deal for Danwood S.A. at its headquarters in Białystok. The ceremony was attended by Huh Yoon-hong, president of new business at GS E&C, and Danwood CEO Jaroslaw Jurak.

Modular construction operators face difficulties becoming global players, owing to the difficulties of transporting materials and the variable regulations present in each country.

The company’s future plans include providing developed modular construction technologies from the United States and Europe in Asia and Oceania.

With some 150 automated manufacturing processes, Danwood has competitiveness on production cost, according to GS E&C. Its key markets include Germany, where it has the fourth-highest sales volume in the modular homes market, Britain, Austria and Switzerland. It plans to expand throughout Sweden and Norway.

“Through the acquisition, GS E&C built the foundation to leap to the next stage based on change and revolution amid the rapidly changing management environment,” Huh said in a statement. “[GS E&C] will strive to solidify its standing in the global modular construction market by creating synergy effects of the acquired companies.”