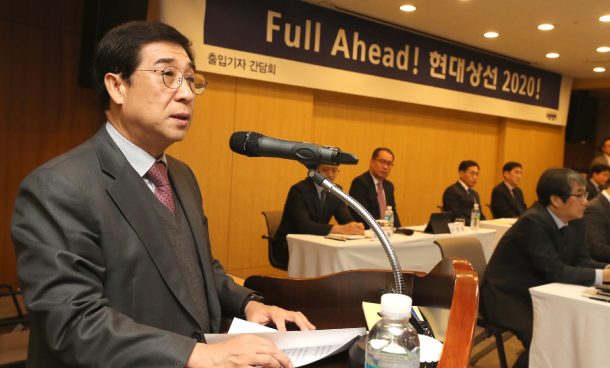 On Tuesday, the CEO said the turnaround is in part a result of the company joining THE Alliance, a global shipping network, and the deployment of three giant vessels in April.

“HMM last year built a strong foundation to improve mid- to long-term profitability by becoming a regular member of THE Alliance and with the acquisition of five new very large crude carriers,” said HMM CEO Bae Jae-hoon at a press event held at the company headquarters in central Seoul on Tuesday.

Last year, HMM was invited to join THE Alliance and won approval from U.S. Federal Maritime Commission for the membership in the grouping.

It will start offering services with other members in April after gaining approvals from other countries. It will offer services on 27 of the 33 routes run by THE Alliance.

HMM has been a partner of the 2M Alliance since 2017, but that relationship will expire late March. THE Alliance offered a better deal, allowing HMM to join as an equal partner.

“Apart from having paid larger amounts of the emergency relief fund than other shippers, [HMM] has been given the equal conditions on everything else,” said Bae.

“HMM plans to expand the U.S. sea routes from 11 to 16 and maintain the eight European routes,” said Bae. “Based on THE Alliance, [HMM] will enhance competitiveness by expanding the range of cooperation to reach out to the Middle East.”

HMM will deploy 12 of 24,000-twenty-foot equivalent unit mega-container vessels on European routes, which will help the company achieve “economies of scale” and solve “high cost issues,” according to Bae. Larger vessels mean the company is able to carry more freight, gaining price competitiveness.

HMM installed scrubber systems on the mega-ships for compliance with 2020 environmental regulations issued by the International Maritime Organization.

In 2018, HMM placed orders for 20 mega-container vessels with support from the Korea Ocean Business Corporation and the state-run Korea Development Bank, which is the largest shareholder of HMM.

HMM hopes to secure orders by sharing space with THE Alliance, but the key will be securing cargo commitments on the way back from Europe or the United States. HMM hired backhaul regional sales specialists who have started working this year.

In the spirit of digital transformation, HMM is building a cloud-based system. The shipper will shift more than 90 percent of its IT to the cloud.

Bae said the company will continue to hire IT specialists for the development of smart ships that feature information technologies like blockchain, artificial intelligence and the Internet of Things.