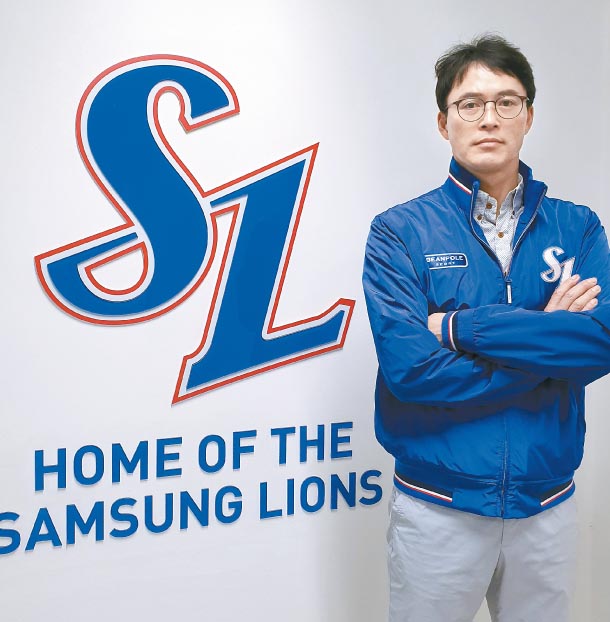 Samsung Lions manager Heo Sam-young hopes to lead his club back to the top of the standings, using his data analysis knowledge. [SAMSUNG LIONS]

When the Samsung Lions appointed Heo Sam-young as their new manager, it came as a very big surprise to the fans as well as the world of the KBO.

In September last year, Heo made headlines on portal sites for becoming the Lions’ new manager.

At the time, there were comments below one article that said, “click like for those who don’t know Heo Sam-young,” an indication of just how unfamiliar he was to the Lions fans and the world of baseball.

Some in the KBO may have known Heo as the Lions’ former head of data analysis, but to the fans, he was almost an unheard-of figure. Three months have passed since he first got appointed, but he still remains unacquainted with Lions’ supporters.

The Lions were once an elite club in the league, and have won a total of eight Korean Series titles, the second most number of wins in the league. The Kia Tigers hold the record at 11. Aside from wins, they’ve advanced to the Korean Series the most number of times at 16, and they’ve also won the most regular season wins as their all-time record stands at 2,580 wins 103 draws and 2,088 losses.

But these impressive stats are a thing of the past. Since 2016, the Lions have failed to advance to the postseason.

The club was established in 1982 and it is not an exaggeration to say that the Lions are at their weakest, so when little-known Heo was appointed, it raised concerns with fans.

“A lot of people congratulated me,” Heo said. “But my family and the people around me were concerned [rather than congratulating me]. Some said that I’m crazy [because I didn’t choose the stable path]. When I get up in the early morning, I think about how to create my team, how to change the atmosphere and how to win. But first, I need to change, because as I change, it’ll change the coaches and the players.”

Heo has never had any coaching experience. But despite this, he felt his longstanding career on the club’s data analysis team would work in his favor.

“I’ve worked as a member of staff at the club for 23 years, so I sensed it [when the club suggested me as a manager],” Heo said. “I sensed that it was already a done deal.

“When the club asked me to be the manager, I felt a very big responsibility. But I also had a sense of pride [that I became Samsung’s manager],” Heo said.

He might not have any coaching experience, but he does have some background as a player. When he was in high school, Heo was a pitcher with a bright future.

In his third year in high school in 1990, he led Daegu Senate High School to win a championship and was named the MVP.

He was then drafted by the Lions. However, he never got to see success in the professional league, but he was afforded the opportunity to get one-on-one lessons under manager Kim Sung-keun.

“I was even called one of Kim Sung-keun’s kids,” Heo said. “That’s how much I’ve learned. But I wasn’t ready. When he taught me 10 things, I wasn’t even able to perform five of them. And my back pain got worse.”

“I was injured, but I couldn’t say I was in pain,” Heo said.

As he was suffering from disk pain, Heo’s professional career came to a quick end with the decision to call it quits after only five years.

Heo ended with a 15.43 ERA over four games, but despite the short career, the Lions didn’t give up on Heo. Instead, they offered him a job in the office.

“I got married when I was 24 [Korean age],” Heo said. “Since my parents passed away [early], I got married quickly, and since I had a family I accepted the club’s request. I knew I wouldn’t be successful with the Lions. Back in the Futures League, it somewhat worked, thanks to my little tricks, but that didn’t work in the KBO.”

In 1996, Heo continued his career, but from behind the dugout. He first joined the data analysis team. He carried a big camera, took videos and made charts at the stadium.

After years of hard work, in 2003, Heo finally became a full-time staff member.

He then structured the Lions’ data analysis team, the club won the Korean Series six times.

“Last year we finished second in home runs [at 122],” Heo said. “But we can’t say we have a high slugging percentage. At Lions Park [where we see a lot of home runs] and at a stadium in Pohang, [North Gyeongsang], which is our second stadium, we hit a total of 76, but in away games, we only hit 46. We can’t be tricked by the average numbers.”

Once again, using his strength in analyzing data, Heo is hoping that he can be successful as the Lions’ manager and lead the club to the top this year.

“I like data,” Heo said. “I don’t think there’s anything more accurate than probability. There are players who need data while some don’t. But the most important thing is for a manager to treat his players equally. Through that process, I have to earn their trust. In the end, baseball is played by people.”