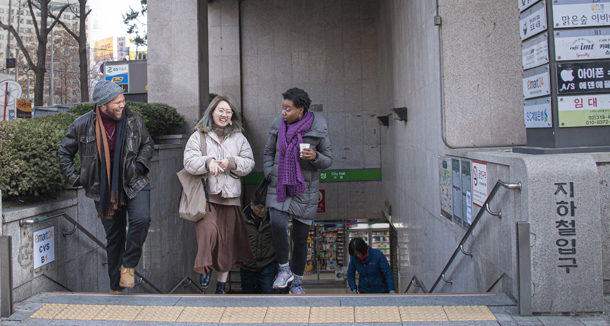 Of the many -isms that people battle over, there’s one that seldom seems to cross people’s minds in Korea - racism. While people debate over gender, region, class and other identities that set them apart, being Korean unites them, leaving racial discrimination off the list of items to fight over in the first place. This results in an openly discriminatory social atmosphere where racists can shut down voices that call their behavior wrong. So staring at people of a different race, whispering rude names in front of their eyes and even saying it out loud to their face - all this happens in broad daylight, and those who point it out are often told that they are being too sensitive.

But there’s one artist who isn’t afraid to speak out. Yerong, a 27-year-old cartoonist, began her web cartoon series titled “A Black Person Sitting Next to Me on the Subway” in January 2019 on Facebook, recording the things she experienced and learned during her relationship with Manni - her boyfriend from Ghana.

Yerong calls her work doodles, referring to the simplicity of her illustrations. But while her drawings are cute, there’s nothing adorable about the stories she tells in her work. The simple illustrations contain bold messages about discrimination that often gets overlooked in the pretense of maintaining social norms. From racism to sexism and discrimination against the disabled, Yerong’s work fights it all.

“I started dating a black man from Ghana,” she said.

“Honestly, I wasn’t interested in racism beforehand. It didn’t feel like it was my problem, because I had only lived in Korea. But having met him, it became my problem, too. That’s when I started to learn about racism and started to really care and learn more about it. So if you read my book, it’s not about me teaching someone, but rather about myself learning to be ashamed and trying to change.”

Yerong’s “Doodles” was made into a book in October, providing both comfort to foreign residents in Korea who face racism daily and a chance for Koreans to think about whether their actions are truly innocent. Her episodes tell stories of subtle stares on subways and the shocking utterances by strangers she and Manni heard on the streets. But sometimes she takes the time to give more direct lessons, such as “Words that can hurt when someone is talking about discrimination” and the 15 things you should not say when someone confides in you.

“I started the series for overseas residents living in Korea. But it turned out later that Korean people were really ignorant when it comes to racial discrimination. So as time went on, the cartoons were aimed more at Korean people,” she said.

Yerong sat down for an interview with the Korea JoongAng Daily, along with two people who related with the stories of Manni in “Yerong’s Doodles” - Michael Edward Smith Jr., an elementary school teacher in Gyeonggi who has lived in Korea for two years, and Melissa Watkins, an assistant professor at Namseoul University who has been living in Korea for seven years. The following are edited excerpts from the interview.

Q. Your cartoon mostly touches on racism and other forms of discrimination that we see in society. What’s the main message that you want to send through your work?

A. Yerong: There is an episode where I have an argument with Manni. I first thought it came from a difference in culture - the culture of the West and the East. But the difference between the two cultures really wasn’t enough. I realized it was about your culture and my culture. That’s the episode that I want to send the most through the book.

Living in Korea, are there times when people say something that they don’t particularly intend to be mean, but come across as insulting?

Watkins: I met a guy once in Korea, and he broke up with me because my skin was too black. He wanted me to bleach it and make it white, but I didn’t want to. So one day, he said he wanted to break up with me because of my skin. But I was like this when you met me! He tried to “fix” me. That was the most hurtful thing that happened to me because it came from someone I had let into my life.

Smith: And there are people who come up to me out of nowhere and tell me they like rap music. Good for you!

Were there times when people meant harm towards you?

Smith: I took a taxi from Itaewon to Haebangchon [in central Seoul] one day with another black friend who spoke Korean, which would usually cost around 4 to 5 dollars. But then the driver took the highway and started driving us to this place and we were begging him to just let us off. Then he started calling us names in Korean, saying that he didn’t like black people because they’re ugly and rude. My friend got so angry at him and started shouting. So we did eventually get to where we wanted, but my friend burst out in tears because things like this happened so often to her - to have someone dislike me just because of [my] looks.

How do you feel in such situations?

Watkins: It’s really frustrating because if I say something, then I immediately fall into that stereotype of being an aggressive black person. So it really helps in those situations to have someone stick up for you, say something for you. If I say it directly at them, they would think that I’m aggressive, so it’s nice to have someone do it for you. But most of the time, people will apologize to you for the people who are mean, but they wouldn’t say anything to them to their face. I understand, because Korea doesn’t have that confrontational culture. But it would just really help if you stick up [for us] because we can’t do it.

Yerong: If you confront people in Korea, a lot of them say, “That’s just the difference in culture.” I used to think that as well, but I realized that it can feel like discrimination for people on the receiving end of those words. I’ve seen a lot of comments on my cartoon saying, “Would you call this discrimination? I mean I get some parts, but isn’t the bar too high?” But people put up with so many things in their lives that the small things add up. So with my works, I tried to find those small things in life.

Were there times when you felt that you were discriminated against even more so because you were a woman?

Watkins: The experience is so different for women. It’s not as dangerous as it is in the [United States], but it’s still dangerous - even though I’m tall and have short hair. But I think in Korea, sexism is a bigger deal than racism is. I think masculinity extends to a broader term here, so a black man is accepted as a man because he’s male and he gets to do what other men do. But femininity is so narrow that it’s really hard to fit into that category. I’m seen as a part of the box, but maybe put my arm in it? (laughs) I’m maybe seen as a woman with a defect in a way. So a lot of the times I experienced discrimination here wasn’t because I was a woman or because I was black, but because I was a black woman.

Some people have pointed out that the usage of the word oegukin - which translates directly to “foreigner” in English - made them uncomfortable because Korean people use it too often to refer to anyone who is not ethnically Korean. How does it feel when you hear the word?

Watkins: It definitely creates a distance. For me, I’ve been here so long and I’m kind of in this weird tipping point, where I’ve been here a long enough time [that] I kind of feel like I’m part of Korea. I’m not, but I am at the same time. I’ve invested a lot of my life here, and Korea has invested a lot in me. So I feel like a part of furniture and kind of feel like I belong here. But when people just automatically refer to me as oegukin - okay, I guess I don’t. I really love Korea. There are a lot of opportunities here, I really love Korean people and the things in Korea. I like my life here a lot. But sometimes, I would sense that Korea doesn’t love me back as much, and that makes me consider my future here and how much I intend to invest in living here.

Yerong: I actually heard something really funny from a friend. The usage of the word is considered discriminatory outside of Korea. But Korean people use it so often that my friend who was in Australia heard Korean people call Australian people oegukin, when in fact they were the oegukin (laughs). I think it all starts from the fact that Korean people aren’t used to multiculturalism, but rather take pride in being the same ethnicity.

Despite the things you experience, what’s the reason you decided to stay in Korea?

Watkins: I think it just helps to keep a healthy sense of perspective. There are a lot of things here that I don’t have to put up with because I’m not living in the [United States], for example. Everywhere is different, and at the end of the day, for me, my life here is very fulfilling and very complete even though I’m not in my home country. Yes, I do experience racism here sometimes, and sometimes I do experience discrimination here, people stare at you in the subway, touch your hair or whatever. But that’s coming from such a different place than it would in the U.S. It’s still hurtful, but it’s not as hurtful. So it just helps to keep a sense of perspective.

As an author, what would you like to say to the people who call you sensitive and say that your work is too fussy?

Yerong: I think Koreans get uncomfortable when someone points out something wrong. But I think it’s important that we keep saying it so that people can realize that it can be difficult for someone else. You have to keep talking and talking so that other people can come forward and talk about themselves, too.

We’re all people. To think that someone’s different or consider them irrelevant to who I am - I think that’s where discrimination begins. People often think that discrimination is something huge, like getting sworn at, beat up or harmed in some way. But it comes from the simplest and smallest things. And I wanted to show those small things through my work.