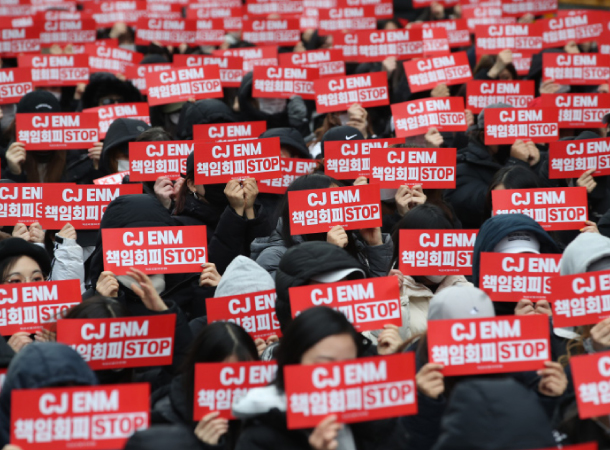 Fans of disbanded project boy band X1 protested outside of CJ ENM’s office building in Sangam-dong, western Seoul, on Wednesday demanding that the company put the group back together and keep the company’s promise to support the members of the group.

Fans of X1, the project band that debuted through the fourth season of Mnet’s audition franchise “Produce 101,” protested outside of the headquarters of CJ ENM, the entertainment company that runs the channel Mnet.

“CJ ENM’s CEO Heo Min-heoi must keep his promise of supporting and protecting X1, who is the victim [in the scandal],” fans said.

X1 was disbanded this month after police investigations found that producers of the “Produce” series had been rigging votes to debut their picks instead of fan favorites.

“The members of X1 had to be criticized for what was not their fault and were forced to disband,” fans said.

“CJ ENM must put together a new band to compensate for their damage.”

Some a thousand people gathered to protest according to organizers and vowed to boycott CJ ENM’s KCON this year, should the company fail to fulfill their demand.

CJ ENM did not give a clear answer to the protest and only said, “We feel grave responsibility that X1 had to disband. We will support them in all ways we can in the future.”