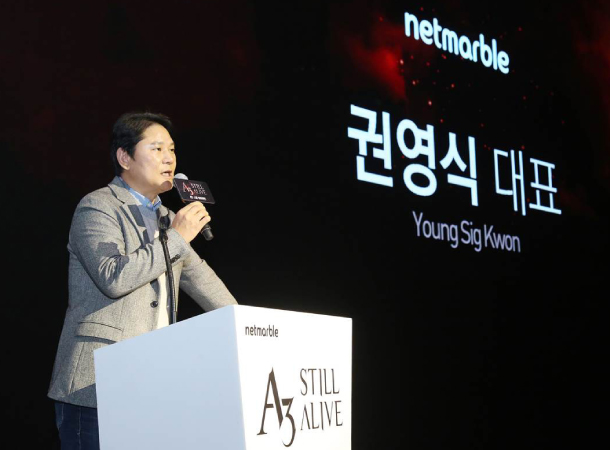 Netmarble will roll out its category-busting A3: Still Alive mobile game in March, the company announced Wednesday.

The game combines the massively multiplayer online role-playing game (MMORPG) and battle royale genres - a first in Korea. In MMORPGs, players can choose a character, level up by collecting items and interact with other users. Battle royale games are more about survival and competition to be the last player standing.

The introduction is intended to grab the attention of fans in both segments as well as audiences in and outside Korea. While battle royale is a genre with a large global fan base, MMORPG is the most popular in Korea.

“Role-playing games are what Korean publishers do best, and we want to lead the global market with that genre,” said Netmarble CEO Kwon Young-sig during a Wednesday press event in central Seoul. “But at the same time there are so many MMORPGs now, and we have to differentiate in one way or the other. Our method was incorporating battle royale.”

Netmarble brought together the two genres in the same game using the scenario: Players can enjoy the MMORPG genre in a peaceful present and jump to battle royale which is a future disrupted by monsters. Battle experiences in the future can accelerate the character’s growth in the MMORPG field. Vice versa, higher-level characters in the MMORPG world enables a wider use of weapons in the battle royale field.

For battle royales, each player will compete with 30 users to be the ultimate winner.

A3: Still Alive is also meaningful for Netmarble as it’s based on the intellectual property of the company’s successful role-playing PC game A3 which launched in 2002. The publisher’s most recent successes were mobile games based on intellectual property acquired from other game makers like Lineage II, Blade & Soul and The King of Fighters.

Netmarble had leaked bits and pieces about A3: Still Alive before Wednesday’s media event, featuring it at two G-Star events, Korea’s largest annual showcase for game publishers. According to the company, it took three years in total and more than 120 developers to complete the project.

The mobile game is one of Netmarble’s most anticipated releases of the year 2020.

“A3: Still Alive is a piece of work that brought together Netmarble’s accumulated publishing capacities - we believe the battle royale-MMORPG convergence will set a new milestone in mobile MMORPG,” said Kwon.

Dates for global releases were not specified at the event, but the company said it is in the process of localizing the game for China.