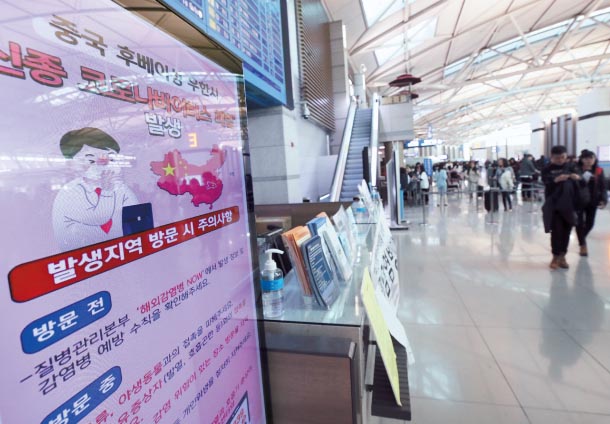 A poster warns about the Wuhan coronavirus and visits to the Chinese city at Incheon International Airport on Wednesday. [YONHAP]

Korea has only one confirmed case of the new coronavirus, which infected a Chinese woman traveling from Wuhan, where the human illnesses started.

But with the Lunar New Year holidays beginning on Friday - when millions of Chinese will travel domestically and overseas - fears are growing of an economic impact similar to SARS or MERS.

The Korea Tourism Organization estimates some 130,000 Chinese people will visit Korea during the holiday season.

The SARS outbreak significantly contracted domestic consumption and even exports from Korea, whose biggest trading partner is China.

The retail and tourism industries were among the hardest hit as many people both at home and abroad stopped going to restaurants and shops and cancelled travel plans.

But some say it is too early to jump to the conclusion that the Wuhan outbreak will exert as significant an influence as either SARS or MERS. 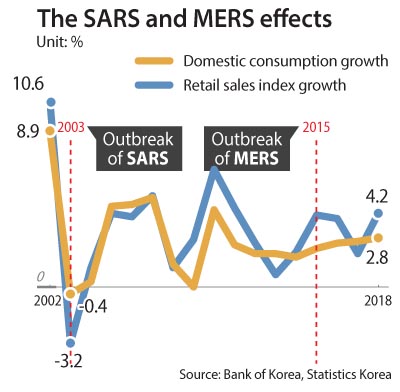 The varying effects are primarily attributed to the different epicenters of the strains, according to Ha Keon-hyeong, an analyst at Shinhan Financial Investment.

While SARS is widely believed to have started in China’s Guangdong Province, H1N1 came from Mexico and MERS from Saudi Arabia. The latter two were farther away and had weaker economic ties with Korea than China.

“Except for SARS, the impact that the outbreak and spread of the infectious viruses had on the Korean economy and financial markets was moderate,” Ha said.

“In the beginning of 2003, when SARS was being spread, the main Kospi bourse plunged by 20 percent within two months,” he recalled, “But during the outbreaks of H1N1 and MERS, the index was locked in a narrow range of ups and downs.”

The country’s private spending shrank 0.4 percent in 2003 compared to the previous year, even without a major financial crisis.

The years in which H1N1 and MERS were a problem did not see a notable decline in the consumption index.

The retail sales index, a measure of all goods sold by retailers, saw a similar trend.

The index fell 3.2 percent in 2003, following a strong 10.6 percent increase the previous year.

That is a worrying history for retail companies worried about the new coronavirus, especially any with sales channels in China.

“The outbreak of an infectious disease stops people from outside activities, which turns into a negative factor for consumer sentiment and sales data,” said Park Sang-joon, an analyst at Kiwoom Securities.

“So in the short run, prices of shares in Korea’s retail companies with connections in China could be corrected,” Park said.

At least for now, many analysts hope that the impact will be limited or short-lived.

“If we look back at MERS and SARS, the weak performance in retail and consumption segments didn’t really last more than three months,” said Park.

“The affected stocks also rebounded shortly after the outbreaks,” he said.

The direct comparison between SARS and the Wuhan coronavirus could be premature since the latest virus is just developing. But analysts say that it has a similar or lower mortality rate than SARS based on the data compiled so far. SARS had a 9.6 percent mortality rate.

“It is believed that the new coronavirus has a similar mortality rate as SARS,” Ha said.

“The defining factor for the Wuhan virus’s impact on the economy will be in the Chinese government’s ability to contain the spread of the disease before the Lunar New Year holiday.”

“If the government fails, the influence could be more serious than it was with SARS given the more active trading and increased amount of people-to-people exchanges between the two countries.”

In the wake of the outbreak, Korea’s airlines including Korean Air and T’way Air announced exemptions of penalties for cancelling flights to Wuhan.

Some retailers are taking a cautious approach by issuing guidelines about cleaning operations at their branches. Homeplus is among the first.

The discount chain on Wednesday released a set of guidelines to employees on preventive measures. The guidelines include expanding the number of sanitizer dispensers installed in stores and making it compulsory for employees offering food samples to wear face masks. Placing sanitizers and wet tissues at store entrances is also part of the guidelines.

“Retailers have experienced a number of contagious diseases in the past like MERS, and therefore, have a set of procedures prepared,” said a spokesperson for Homeplus.

Emart said its workforce is sanitizing shopping cart handles. It is also offering hand sanitizers at the stores, but a spokesperson said the retailer had such sanitary controls in place even before the Wuhan illness broke out.

“If things get worse, we expect the health authorities to announce certain guidelines. Until then, we’re controlling the stores’ sanitation the same way we have been doing, without offering anything extra.”

A spokesperson from Shinsegae Department Store said it will gradually expand the number of sanitizers installed throughout the stores when the virus grows more serious.

Hyundai Department Store says there isn’t much it can do.

“Whether people visit stores in time of virus outbreaks is affected by their mental psychology, not how many sanitizers we install,” said its spokesperson. “Although we may strengthen sanitary controls, we can’t control fear.”