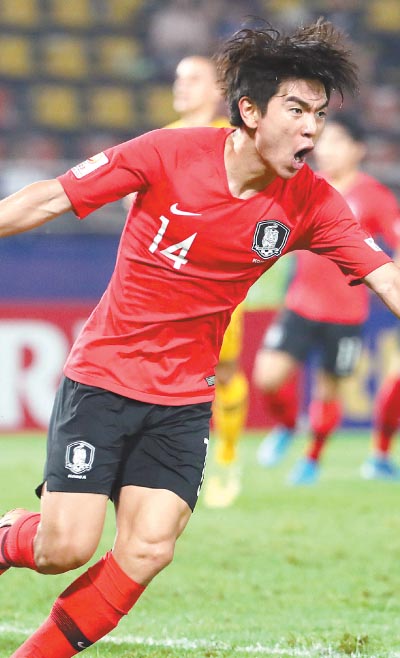 Kim Dae-won celebrates after scoring a goal during a semifinals match against Australia at the Asian Football Association U-23 Championship at Thammasat Stadium in Thailand on Wednesday. [YONHAP]

Korea’s U-23 football team is heading to the 2020 Tokyo Olympics this summer.

By defeating Australia 2-0 during the semifinals at the Asian Football Confederation (AFC) U-23 Championship on Wednesday, Korea managed to qualify for their ninth straight Olympic Games.

After a scoreless first half, midfielder Kim Dae-won finally broke the silence at Thammasat Stadium in Thailand by scoring the opener in the 56th minute. Then just 20 minutes later, Lee Dong-gyeong doubled Korea’s lead by scoring another in the 76th.

“I’d been stressing out because I hadn’t scored a goal in this tournament,” Kim was quoted as saying on Yonhap.

While this was Kim’s first goal in the tournament, for Lee, this was his second, making him one of Team Korea’s scoring leaders, along with Oh Se-hun, Cho Gue-sung and Lee Dong-jun.

“I’ll obviously convert my chances if I get them,” Lee was quoted as saying. “But I’ll focus on trying to help my teammates with the scoring title.”

Along with the two players’ goals, it was an impressive match for Korea statistically, as they had seven shots on target while the Socceroos had zero.

This victory also lifted some pressure off of head coach Kim Hak-bum. As this tournament also serves as the Olympic qualifier, only the top three teams will earn spots at the Olympics. Had Korea lost, they would have been under significant pressure to win the third place match.

Of the 16 spots available at the 2020 Tokyo Olympics men’s football tournament, Korea became the 11th team to qualify. In the Olympic tournament, each team is allowed three wild cards, where three players of over the age of 23 can be added onto the roster.

This will be the 11th time the Korean men’s football team has competed at the Olympics. Korea’s best finish was a bronze medal at the 2012 London Olympics.

This is an impressive achievement for head coach Kim, who also led the team to win gold at the 2018 Asian Games.

“I’d be lying if I told you I didn’t feel any pressure, but I couldn’t show it to my players,” head coach Kim was quoted as saying. “We could have had another opportunity to qualify in the third place match, but we all wanted to get it done today.”

Looking at Korea’s performance at this tournament, the U-23 team has been undefeated. They first got off to a shaky start in the Group C action by picking up a 1-0 victory against China. Their first match raised serious concerns for the fans, as Korea barely won by scoring the winner in the overtime.

But since that match, Korea had been steadily improving. They topped Group C by defeating Iran 2-1 and Uzbekistan 2-1.

In their quarterfinals, Korea picked up another 2-1 victory against Jordan, and on Wednesday, and the young Taeguk Warriors defeated Australia 2-0 en route to the finals.

Throughout the tournament, head coach Kim had been making changes in his lineup. Due to this, a total of 21 out of 23 players got to compete in at least one match. This allowed the players to gain experience while allowing other players to conserve stamina. However, two goalkeepers - Ahn Joon-soo and An Chan-gi - have yet to make their debuts at this tournament.

“It’s just so difficult to switch goalkeepers [during a tournament],” head coach Kim was quoted as saying. “I think they understand, since we’ve been playing for an Olympic berth here. Everyone has come together as one team.”

With a win, Korea will now compete for the title against Saudi Arabia on Sunday, at Rajamangala National Stadium in Bangkok, Thailand, scheduled to kick off at 7:30 p.m., local time, or 9:30 p.m., Korea time.

Looking at the two teams’ all-time head-to-head records, the Taeguk Warriors are well ahead with four wins, three draws and zero losses.

“We’ll keep marching on,” Kim was quoted as saying. “Our substitutes did a great job off the bench, and now it’s time for us to prepare for the final.”

Before the final, Australia will play for the third place spot - the final Olympic spot - against Uzbekistan on Saturday, at 7:30 p.m., local time, or 9:30 p.m., Korea time.