Careful who you listen to

Careful who you listen to 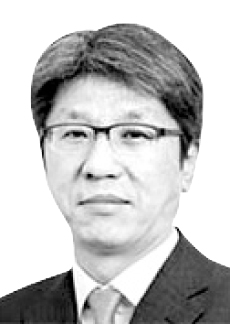 In his fourth year, a president usually becomes confident about his way of running the country. A president would start to think, “I want to be remembered in history,” and his or her determination to forge a legacy will be strengthened. But a sense of destiny divorced from reality is dangerous and can ruin all that’s gone before. President Moon Jae-in’s media conference at the beginning of the year showed his obstinate conviction to push forward in his own distinct way, while also reflecting his uneasiness. The press event also made us wonder if his aides are properly supporting him.

Bob Woodward, a journalist who became famous for reporting the Watergate scandal in the 1970s, wrote “The Agenda: Inside the Clinton White House” by interviewing over 250 government officials including Bill and Hillary Clinton. According to the book, Bill Clinton, after his victory in 1992, held a New Year’s event, and Ken Adelman, who worked in the Reagan administration was invited.

“Reward those who stand up and correct you” or those who dig out information for you, even if it’s bad news, Adelman was quoted in the book as telling the president-elect.

“First, the difficulty you will have getting good, solid information. People are not very honest. Numbers will be disputed. People will shade things all the time. So you’ll confront an epistemological question: How do you know?” Adelman was also quoted as saying. “I’ve been in the room many times, when a cabinet officer would not correct something the president had said, when it was clear it was wrong.” 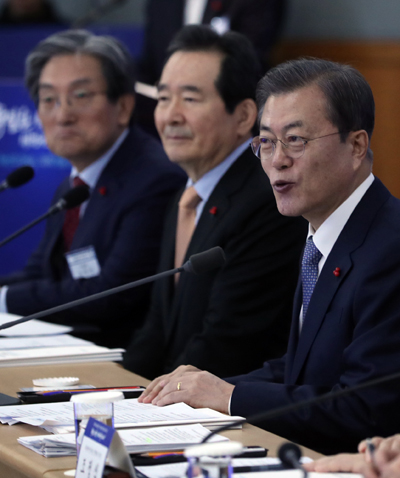 President Moon Jae-in, right, presides over a meeting with his aides at the Electronics and Telecommunications Research Institute in Daejeon on Jan. 16. [YONHAP]

Clinton responded that he’d noticed that since becoming president-elect. Adelman, then, added, “People, strong people, will come into the Oval Office and bow and scrape, be disgusting in ways you cannot imagine.”

The book goes onto say that a person can become deaf and blind when he or she becomes the president.

What would Moon feel if he read this book? Moon may be in a similar situation. One proof is the president’s optimistic perspective toward the economy.

Since last year, Moon repeatedly said the economy is maintaining a healthy flow and is moving in the right direction. Even this year, he said the economy is getting better. He is too optimistic. His income-led growth policies have discouraged investments, and the economy’s potential growth rate plummeted. It is largely agreed that the economy is in a crisis.

Moon’s remarks about his administration’s real estate market policies also made us suspect that he was not getting proper support from his aides. In his New Year’s press conference, Moon said that skyrocketing housing prices “must be returned to where they were.” If the government pushes measures that restore real estate prices to the level at the time of his inauguration, enormous losses are to be expected. We wonder if Moon had taken that into account.

Furthermore, Senior Presidential Secretary for Political Affairs Kang Gi-jung mentioned during a media interview the next day that the government should consider a system where permission is required to buy or sell a house. That remark prompted serious blowback, and one day later, the presidential chief of staff retracted it.

It is extremely deplorable. Moon is not an economic expert, and his aides must be blamed for the situation. That also applies to other areas.

In his book, Woodward depicted a moment in which Clinton got enraged after receiving a report that the fiscal deficit would be $60 billion higher than predicted. It showed that his aides had neglected their duty to tell the truth to the president.

Five to six months before Korea was hit by the Asian economic crisis of the late 1990s, President Kim Young-sam reportedly received briefings from his aides that the economy had managed to accomplish a soft landing and the world was praising his leadership. An official recalled that Kim was advised only later that he should not believe all reports from his aides because bureaucrats always try to avoid blame.

Moon must find a way to avoid these situations Kim and Clinton found themselves in. He must meet with his critics and hear their views. For Clinton, Adelman was an adviser with critical views. Moon must invite conservative leaders who can give him candid advice.
He should also meet with opposition lawmakers. If that is too much trouble, he can schedule a routine meeting with the National Assembly’s committees. It will allow him to show respect to the legislature and to avoid the burden that he is only meeting with opposition lawmakers.

The Blue House must change by recruiting critics. There is no upside of the Blue House being filled with “pure blood” Moon loyalists. When Clinton was suffering from a plummeting approval rating, he recruited David Gergen, a Republican, to improve communication.
For Moon to not fail, he must listen to critics. If he becomes willfully deaf and blind, we will face a failure of not only of the president but also the country.