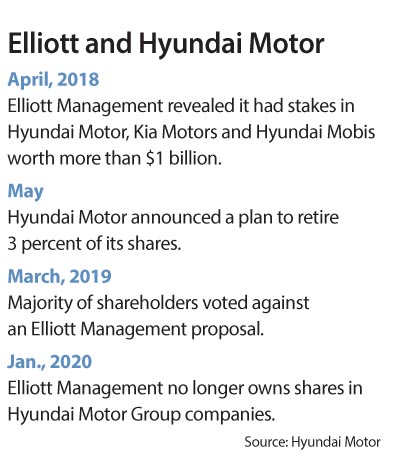 New York’s Elliott Management has completely cashed out of the Hyundai Motor Group, selling all of its shares in three related auto companies.

It is estimated that the fund lost money from the holdings, holdings which may have cost $1 billion.

The sale of the shares was widely reported in the Korean press, and Financial Supervisory Service data show no Elliott Management holdings in any of the companies. Hyundai Motor would not confirm the unloading of the stake.

Local press reports say that the shares were sold before the end of last year. Elliott Management revealed its equity interests in the group in April 2018.

While Hyundai Motor would not comment on Elliott Management’s stake, a spokesperson said that the company would continue addressing corporate governance issues with or without the presence of the shareholder.

Elliott Management had been pushing for an increase in dividends and the nomination of outside directors, but it failed to win enough votes to pass its resolutions.

Elliott Management had demanded a one-time payout of 4.5 trillion won, or 21,967 won per share, in 2019 from Hyundai Motor. The automaker’s board proposed 3,000 won per share instead.

Eighty-six percent of the participating shareholders voted against the proposal, while 13.6 percent of votes backed Elliott’s proposal. The result was widely expected as proxy advisers, including Glass Lewis, the Institutional Shareholder Services and the Daishin Economic Research Institute, opposed Elliott Management’s resolution.

Elliott Management proposed changes to the governance structures of group companies in order to maximize returns for shareholders.

In March 2018, the group did announce a plan to restructure into a holding company from the current web of cross holdings, but the plan was later withdrawn.