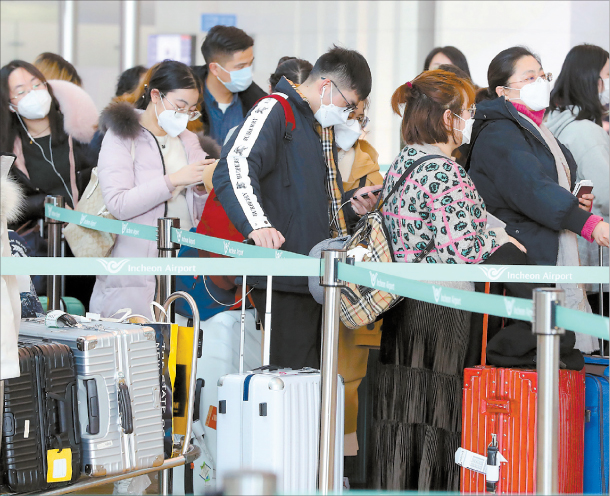 The tourism industry braced for big problems with the new coronavirus coming out of China ahead of a four-day national holiday.

Alarmed travelers canceled trips to China, and the Ministry of Foreign Affairs issued a travel alert for Wuhan - seemingly the source of the outbreak - and Hubei Province in China on Thursday.

“The number of cases of the new coronavirus that started last December is on a rapid rise,” the ministry said in a statement. “The measure also takes into account Chinese authorities’ decision on Jan. 23 to halt flights leaving the city and close down public transportation.”

A Level 2 travel alert was raised for Wuhan and a Level 1 warning for other cities in Hubei. There are reportedly 800 to 1,000 Koreans living in Wuhan, although none were diagnosed with the illness.

As of Thursday, nearly 600 cases were reported across China, with a death toll of 17. Outside the country, six people were confirmed to have been infected by the disease, including one Chinese woman who tested positive upon arrival in Incheon on Sunday.

On Thursday, Hanatour reported a 20 percent increase in the number of cancellations of trips to China for January and February compared to a year earlier. Interpark Tour said 15 to 20 percent of all bookings to China between January and March were canceled.

The number of cancelled trips to China has surpassed 1,000, a big number considering the fact that Korean tour companies typically send 10,000 tourists to China each month.

From the agencies’ perspective, a lot of travel to China is in packages with hotel and plane reservations linked to one another, making it difficult to change or get refunds in the case of cancellations. Local tour agencies have greater grounds to demand refunds from Chinese partners if the Korean government designates the country as a dangerous travel destination. But it hasn’t done so.

“There are a lot of customers saying they want to cancel even it results in a penalty,” said a tourism industry source. “This is a big issue so we’re discussing ways to minimize the cancellation fees.” As an alternative, some travel companies are offering to cut their own commissions if customers switch to other destinations such as Southeast Asia.

On Thursday, Wuhan closed down its airport and railway stations. Public transportation was halted as well from 10 a.m.

Korean Air stopped flights to Wuhan from today through Jan. 31. The company operated flights to the city four times a week.

“In regard to the route’s operation after February, we plan to make decisions according to the Chinese government’s measures,” the carrier said in a statement.

Asiana Airlines, Korea’s other national carrier and the second largest, does not offer direct flights to Wuhan.

Low-cost carrier T’way Air was supposed to start operating the Incheon-Wuhan route from Jan. 21 but postponed the launch. It obtained a government license for the route last year.