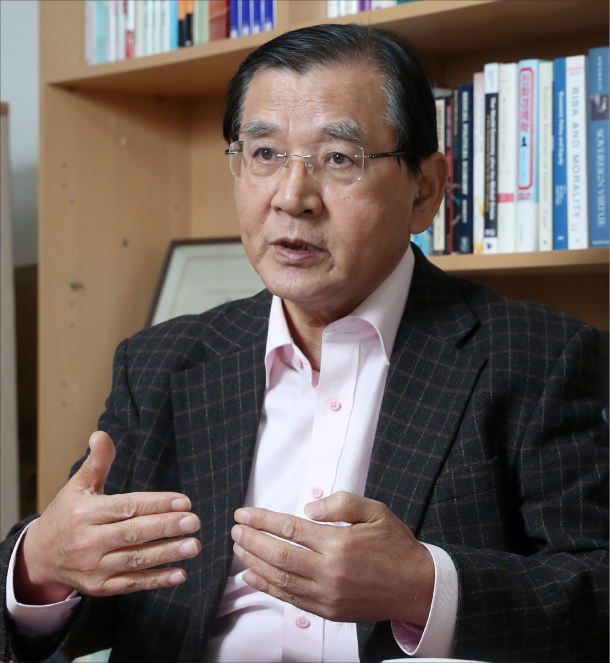 It has been two years and eight months since the Moon Jae-in administration began. The president stressed the “clear change” he has brought to Korea in a New Year’s speech on Jan. 7, but some challenge that notion. The JoongAng Ilbo sat down with Kim Dae-hwan, professor emeritus of economics at Inha University, in his private lab on Bangbae-dong, southern Seoul, on Dec. 30. Kim served as labor minister for two years in the Roh Moo-hyun government and as chairman of the Economic and Social Development Commission for three years in the Park Geun-hye administration.

Q. How would you evaluate Moon’s policies?

A. Every policy, especially economic policies, went against rationality, or as I dub them, “policies against reason.” The government promised to “change the mainstream” and “change the wrong flow [of the past],” but in reality it was a deeply irrational approach. The politicization of economics was a serious mistake. There was a strong intention to beat the forces of the market with political power. This was not to make up for deficiencies in the market, but trying to dominate and control the market.

I tried to find one, but to be honest, there is none. And it seems like they are going to maintain their existing policy stances without any efforts to revise or improve them. Some say they will finally see reason once we hit bottom and fail. Economic policies reflect the world, but rather than accepting reality, they blame the statistics. They only use data when it is favorable to them. Politicians may not know the dangers of doing that, but a policymaker should. Since the inauguration, everything was political. A promised minimum wage of 10,000 won ($8.60), zero non-regular workers and the phasing out of nuclear power all came back as boomerang effects. Ever since Moon made his policy stances, I was worried they would never get beyond the scope of propaganda.

Do you agree with the newspaper columns that criticize the Moon government for not having former president Roh Moo-hyun’s pragmatism?

I generally agree with their criticism. The two governments both aimed to protect the socially underprivileged. The Roh administration not only financially supported people with disabilities but also helped them find jobs and use transportation. The Roh government had a lot of policy debates with the opposing forces. The current government is only concerned about justifications and to push its stance. Politics always comes before economic policy. From the start to the end, it’s all politics, which is populism. The distributive populism of the current regime has to be changed to productive welfare.

What is the biggest risk factor for our economy this year?

The Moon government is very labor-friendly and is heavily influenced by the democratic trade unions, which sends a big message to the market. The government should work as a neutral mediator between labor and companies. In particular, policies should focus on the workers and not be hijacked by the labor leaders. Since that is not the case, companies are discouraged. If I go to give a lecture in the countryside, businessmen complain, “I am worried that mid-sized companies will leave Korea.”

What do you think about the Korean Confederation of Trade Unions becoming the biggest umbrella union in Korea?

It had power even before becoming the biggest union, so I think it will clamor for more clout in the future. It is natural how the organization exerts more power as it grows. However, that should not lead to a deviation from universal norms, laws and principles. The more influential it gets, the more social responsibility it should bear.

The Gwangju employment model had a groundbreaking ceremony last year, which the JoongAng Ilbo criticized last February as a “social pact that fails to address the core problem.” How do you see this project?

It is a pity. I do not know why they are in such a hurry. How can the parties agree on fundamental labor rights when the persons directly involved do not even exist yet? Nobody is thinking five years ahead. It is like taking off with the doors open. Such a hasty approach is quite dangerous. It could turn out to be a public company in which no one is responsible. Even if it takes time, every policy needs some patience to lay the groundwork.

University professors nationwide chose “gong myeong ji jo” as the four-character Chinese idiom of 2019, which literally means the two-headed bird will die if either one of the heads die. Our country is fiercely divided into liberals and conservatives, or pro-government and antigovernment forces. How can society be harmonized?

Basically, the ones with power need to yield. But they fear that the beneficiary will never be satisfied and keep asking for more. Everything should be done gradually, step by step. Compromises and concessions need evaluation. If one starts out big from the start, no concession nor compromise will be made.

This seems to be in line with the idea that democracy requires self-control. Do you agree?

Yes. We tend to demand everything get done by today as if tomorrow does not exist. It is because we lack societal trust. We need to start at a low level of building trust and then start making compromises and concessions. This has to become a custom and culture.

What do you think about the court ruling that Samsung’s union abuse was illegal last month?

There can be management without a union, but for stability, there must be a labor-management agreement. It is not sustainable if it interferes with the union formation. Samsung has no choice but to recognize the union as the cost is enormous if Samsung were to manage without a union. It may turn out to be a hard game for both unions in competing for Samsung. Samsung needs to manage righteously. The government must keep its laws and principles and be neutral.

What do you think about the recent management disputes in Hanjin Group?

The culture of the CEO holding the emperor’s position in the organization needs to change. In terms of controlling personnel affairs, it should be done based on objective data and not by family or relatives. When evaluating corporate policy, we need to check whether the behavior is fair or not. When possible, allow autonomous company succession so that the family business can have a breathing space.