Fancy getting here via Daegu instead of Incheon?

Fancy getting here via Daegu instead of Incheon? 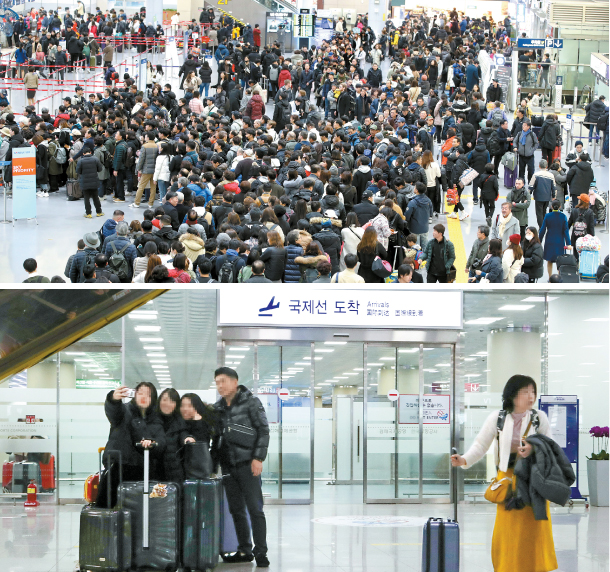 Top: The departure hall at Gimhae International Airport bustles with tourists on Jan. 3, with locals waiting to board planes for trips abroad. Above: The arrival hall of the Gimhae airport. In 2018, there were a total of 27.7 million outbound local travelers, which was double the number of inbound visitors. [SONG BONG-GEUN]

We were lucky enough to meet a Chinese tourist, a businesswoman in her 30s from Shanghai, one of the very few foreigners of any nationality in the arrival hall. She was here for an eight-day trip around Korea.

At 1:40 p.m., a China Eastern flight arrived from Weihai Dashuibo Airport. Ryu Chi, a Chinese exchange student at a nearby university, was on his way back to Korea from a short visit home in Yantai, China.

“Most passengers on the weekdays are Koreans. Foreigners use the flight during the weekends, and most are Chinese exchange students and Chinese immigrant workers,” explained Ryu.

That afternoon, two Chinese students were waiting at the airport to board a flight to China. Lai Lokyen, who had just finished a year as an exchange student at Daegu Catholic University, was one of the two.

The airport started bustling when a T’way Air flight from Narita, Japan, arrived around 4:45 p.m. There was an abundance of Japanese passengers, but most were waiting to transfer to flights to Southeast Asia. One Japanese couple boarded a flight to Bangkok and another couple transferred to Cebu, the Philippines.

“We scheduled the trip in a rush, so we decided to stay the night here before arriving at Cebu,” said one of the Japanese passengers.

Daegu International Airport during the holidays was mainly an “outbound” exit for locals. Even though passengers from a T’way flight from Taiwan started flooding in through the gates around 4 p.m. on Jan. 7, most were Koreans - families, senior couples and groups coming home from the end-of-the-year holidays.

The only Taiwanese tourists to be seen were three 40-something businessmen in Daegu for a business trip. For Japanese tourists, Daegu was mainly a stopover on the way to Southeast Asia.

From January to November last year, around 1.1 million locals departed from Daegu International Airport, almost 5.8 times the number of foreigners (189,000) coming in. In 2018, there were 9.8 times more outbound locals versus inbound foreign visitors. According to an official from Daegu International Airport, foreigners on group tours tend to take early morning flights, most of which are headed for Busan or Gangwon.

Cheongju International Airport was no different. A number of Chinese passengers arrived on a China Eastern flight from Weihai, China, which landed around 1 p.m. on Dec. 31. It was hard to tell if they were tourists or not since most were meeting Korean friends in the arrival hall. The scene played out under a banner which read “Achieve 3 million annual customers.” As with many other flights from China arriving at the Cheongju airport, the plane was filled with Chinese students studying in Korea.

From 2013 to 2017, Chinese tourists flooded into Cheongju International Airport. The number of inbound visitors exceeded the number of outbound locals by 2.8 times in 2015. The situation started to change in 2018, as tensions between Seoul and Beijing increased over the deployment of the U.S.-led Terminal High Altitude Area Defense antimissile system.

According to Park Byeong-Jin, managing director of Cheongju International Airport, Cheongju is an ideal stop for group tourists headed to Seoul or Jeju Island. It’s cheaper than Incheon but equally accessible to Seoul. It takes only an hour and 25 minutes by an express bus to get to Gangnam from Cheongju.

Local tourists are the main users of domestic airports in Korea. Domestic tourism keeps them alive, and international tourism is an afterthought.

Most are not foreigner-friendly. They do not generally connect to subway systems, and the buses are hard for foreigners to use. There is a long way to go for regional airports to function as gateways for inbound tourism, says Professor Yun Dae-sic, who teaches urban engineering at Yeungnam University. He notes the lack of infrastructure for foreign tourists in Korea’s regional areas. Compared to the density of tourism infrastructure in the capital, such as duty-free stores and cultural sites, such resources are scattered around in rural areas. Yun suggests establishing a system that can “link the airport with outside tourist sites.”

The total number of inbound travelers for all of Korea was 13.9 million in 2018, up from 5.8 million in 2008, a 100 plus percent increase. The share taken by regional airports has changed little or remains unchanged: Incheon’s share went from 78 percent to 76 percent in that period; Gimpo from 9 percent to 8 percent; Gimhae 7 percent to 9 percent; and the other five airports 6 percent to 7 percent. Incheon and Gimpo together take 84 percent of inbound passengers while the rest only account for 16 percent.

Even though the number of inbound passengers increased by threefold at regional airports, they still function as “satellite airports.” Due to this reality, the government is trying to revitalize regional airports by increasing the number of inbound flights. In line with the initiative, the Korea Airports Corporation and the Korea Tourism Organization have formed a consultative body for each region.

The situation is different in Japan, as inbound passengers are evenly distributed around the country. In a study, the Nikkei noted a clear uptick in the use of secondary airports. The paper looked into data on 57 regional airports and found inbound passenger numbers are up five times over the past decade. Regional airports took around 25.2 percent of the country’s inbound flights.

“West Japan or the Kyushu region is inviting foreigners to experience areas outside the golden route such as Tokyo and Kyoto,” the Nikkei explained.

Yoko says many “repeaters,” or international tourists that come back to Japan, tend to go to areas outside the country’s center. Japan plans to increase the number of rural residential tourism programs this year.

Inbound trips are important in the reviving of provincial areas. The gap between Japan and Korea will widen even more if Korea fails to create killer tour content and diversify travel to regional airports.