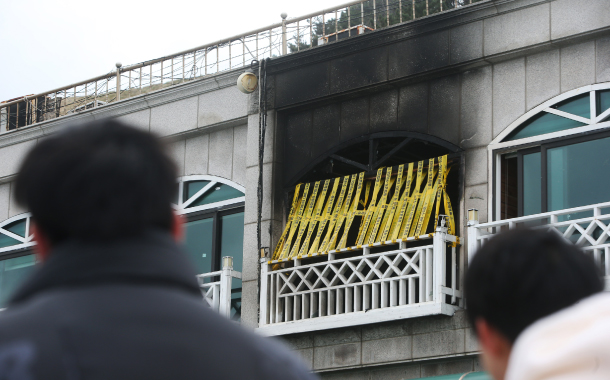 People look at the burned window of a rental lodge in Donghae, Gangwon, where an explosion caused by a possible gas leak on Saturday killed six people and injured three others, most of them family members. [YONHAP]

An explosion caused by a possible gas leak at a rental lodge in Gangwon on Saturday killed six people and injured three others, most of them family members gathered to celebrate Lunar New Year’s Day.

The accident occurred around 7:46 p.m. on the second floor of a rental home in Donghae, Gangwon, said the Donghae Police Precinct. According to a preliminary investigation, the victims were cooking meat on a portable gas stove, which ignited gas leaking from liquefied petroleum valves installed in the building to fuel the stoves in each room.

The resulting explosion caused a fire that raged for around 20 minutes before firefighters arrived on the scene and extinguished the flames. Four of the seven occupants of the room were killed, while the other three sustained burns on the entirety of their bodies, emergency responders said. Two of the injured victims later died shortly after being transported to the hospital. The other two people who sustained injuries in the accident were two men exposed to noxious fumes while dining at a raw fish restaurant on the first floor of the building. They have since returned home after being treated, police said.

The incident received widespread public attention after it was reported the victims on the second floor were close members of a family of six sisters, all aged in their 50s and 60s. The sisters, some of their husbands and a cousin had gathered to console the third sister, surnamed Lee, whose only son died from a heart attack in Cambodia last week, according to surviving family members.

“[Lee] was devastated after the loss of her son and had been suffering from symptoms of a bipolar disorder,” said one family member, surnamed Kim, at a wake for the victims. “The sisters, who were always very close, had met at the lodge to console her but were met with another tragedy.”

Of four of the sisters who were present at the lodge when the explosion occurred, three died along with two of their husbands. The third Lee sister initially survived, but later succumbed to her wounds at a burn hospital in Cheongju, North Chungcheong, family members said.

Kim, who revealed he was the husband of the youngest sister, said he and his wife were due to arrive at the lodge an hour after the accident, and that the family was devastated.

Police said the six victims who died from the explosion will be subject to autopsies by the National Forensic Service (NFS) to delve into the exact cause of the accident.

Police suspect the likely cause of the gas leak that led to the explosion was incomplete finishing work as six of the eight stoves in the rental home had recently been switched from gas to induction models. A joint early investigation by police, fire authorities and the NFS on Sunday showed that the pipe carrying liquefied petroleum gas from exterior tanks to the stoves had not been properly sealed off during the transition process. The lodging facility was also operating illegally without a license and therefore had not been screened by monitoring authorities. The local fire department had filed a report to city authorities last month on this suspected violation regarding the building in question, but no measures had been taken.