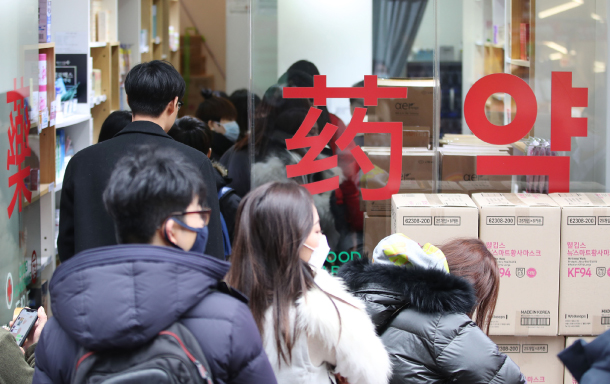 Foreign tourists line up at a pharmacy in Myeong-dong, central Seoul, on Monday, to buy medical masks after the fourth coronavirus infection in the country was confirmed. [YONHAP]

Three more people in Korea have been diagnosed with the new coronavirus over the Lunar New Year holidays, local health authorities announced Monday, bringing the country’s total number of confirmed cases to four.

All three were Korean men in their 50s who recently returned from Wuhan of Hubei Province, central China, the epicenter of the coronavirus outbreak. Korea’s Lunar New Year holidays lasted from Friday to Monday.

The first confirmed patient in Korea was a 35-year-old Chinese woman who traveled from her home in Wuhan to Incheon International Airport on Jan. 18 to spend the Chinese Spring Festival holidays with her friends in Korea and Japan. She was immediately transferred to a nearby hospital for quarantine after airport officials detected symptoms of the virus from her upon her arrival. She’s still in Korea, undergoing treatment.

The coronavirus, which broke out in Wuhan last month, has resulted in at least 2,744 infections and 80 deaths in China alone as of Monday, mostly in Wuhan. Outside China, the virus has spread to at least 10 countries, including the United States, France, Australia, Singapore, Nepal and Malaysia.

Shortly after the fourth patient was confirmed on Monday, the Korean government elevated the national infectious disease alert level from the second “yellow” level to the third “orange” level on the four-tier system, raising alarm that more people could be diagnosed.

The fourth “red” level is imposed when an infectious disease spreads throughout an entire local community or across the nation.

Korean officials said Monday they were ruminating on the option of sending a chartered plane to Wuhan in order to evacuate some 500 to 600 Koreans, including students and businessmen, and bring them back home.

The Chinese government has locked down Wuhan since last Thursday to block the spread of the virus, and closed off all travel into and out of the city.

Among the three Korean patients who newly tested positive for the virus over the holidays, the third patient was perhaps the most heavily scrutinized by the government - and criticized by the public - for roaming around the busiest district of Seoul, Gangnam, after returning from Wuhan on Jan. 20. Korea’s Centers for Disease Control and Prevention (KCDC) said he used to live in Wuhan, meaning he wasn’t there for a temporary visit. He was diagnosed with the virus Sunday.

Local health officials said it appeared he went near 74 people from Jan. 20 to Sunday, in restaurants, a coffee shop, a hotel and a plastic surgery clinic, mostly in either Gangnam District, southern Seoul, or Ilsan, just northwest of Seoul in Gyeonggi.

That means more people who came within a certain physical boundary of the third patient might soon be diagnosed with the virus, given that the incubation period is 14 days and the virus can be transmitted from human to human.

In a press briefing Sunday, health officials said the third patient visited Glovi Plastic Surgery in Sinsa-dong, Gangnam; Hotel Newv in Yeoksam-dong, Gangnam; a GS convenience store right next to the Han River in Jamwon-dong, Seocho District, southern Seoul; and several other restaurants in Gangnam and Ilsan, whose names were undisclosed.

A KCDC official said most places where he visited have been sanitized over the holidays, adding that officials were working their way down the list and continuing disinfection work.

Along with the fourth patient, the third patient also raised red flags in Korea because they didn’t show any signs of the virus when they arrived back in the country through the airport, where officials have been trying to track down infected patients before they contact anyone else, and put them under quarantine.