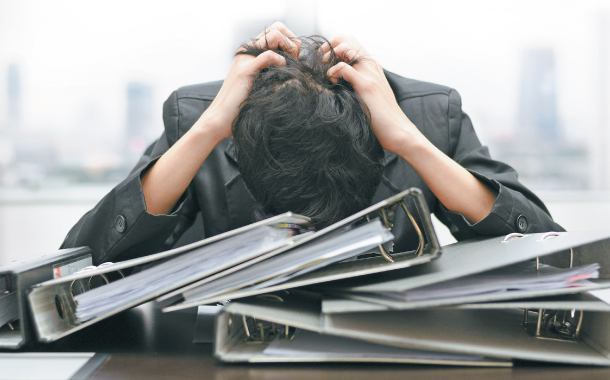 Thirty-year-old Park Ju-hee, who wished to use a pseudonym, went into a coma for a week in May last year. The reason? Work-related stress.

Park was hired by a big entertainment company in January 2015. According to her, the suppressive atmosphere of the company weighed heavily on her, and as the youngest person in her team, she was burdened with unreasonable demands from other team members.

“I couldn’t even go to the restroom freely due to the atmosphere at the company,” Park said reminiscing on the past. “It would be 8 p.m. before I even had a chance.”

Her life at work became even tougher when one of her colleagues committed suicide. Park often felt sad and cried for no reason. Park also claims she once suffered a heart attack, but despite visiting the doctor several times, she was unable to receive any treatment due to her excessive work schedule. Eventually, she decided to quit the job.

After traveling for a year, she took a job at a state-run company affiliated with the Seoul Metropolitan Government, but she handed in her resignation after less than six months because of inefficient management and her superiors’ irresponsibility.

It was at her current company, where she’d been working for less than a month, where Park went into a coma.

In 2017, about 6,129 people were diagnosed with cardiovascular diseases caused by work stress. The number increased by 33 percent and reached 8,105 as of the end of 2018. Also that year, about 126 people were diagnosed with psychiatric disorders, while 52 people suffered from depression. In addition, 21 people received treatments for post-traumatic stress disorder and one person for an anxiety disorder.

A revision to the Occupational Safety and Health Act, which was amended after a 24-year-old temporary worker Kim Yong-kyun was killed when he was crushed by a steel conveyer belt at a Korea Western Power’s power plant, finally came into effect last week.

New employees are the most likely to become victims of industrial accidents. Of all people who were injured or died at their workplaces in 2018, about 52 percent, or around 38,557, had worked for less than a year, according to data provided by the Ministry of Employment and Labor.

But it’s not just industrial accidents, in the literal sense of the term, that are causing deaths.

In October 2017, a worker was found dead in his apartment less than five months after he joined a company. It was later found that he worked overnight almost everyday, even on weekends and was burdened with many extra tasks that were not his responsibility. He was also required to attend after-work events organized by senior employees about two or three times a week. The Seoul Administrative Court acknowledged his case as an industrial accident last October.

According to the Organisation for Economic Cooperation and Development (OECD)’s review of regulatory reform, “Regulatory Policy in Korea: Towards Better Regulation,” it said “the number of regulatory mechanisms that have been introduced highlights the shortage of certain resources such as manpower for some enforcement agencies, especially in relation to occupational safety.” Since there are not enough human resources who can manage occupational safety, the number of industrial accidents has been considerably growing in Korea.

The report also said, “the share of public sector employment in Korea lags significantly behind that of the rest of the OECD member states for certain enforcement areas, in particular occupational safety.”

According to data provided on human resources assigned for occupational safety, the number of employees per regulatory enforcement staff in Korea is about 44,258 while that in Britain and Germany is only about 12,221 and 8,507, respectively. Since regulatory enforcement staff in Korea, in comparison with those in other countries, has many more employees to take care of, they are at greater risk of experiencing industrial accidents.

The public sector is also a blind spot in terms of industrial accidents.

Lee Eun-jang, a 32-year-old postman who worked for Korea Post in Gongju, South Chungcheong, was found dead at his home in May last year. His cause of death was ruled as a heart attack which Lee’s family claim was due to his excessive workload.

A day before Lee’s death, another postman Park Ho-seong from Uijeongbu, Gyeonggi, also died of cardiac arrest. He was 58 years old. About a month later, 49-year-old Kang Gil-sik in Dangjin, South Chungcheong, also died after suffering a heart attack.

From 2015 to 2019, a total of 191 civil servants including postmen were killed, or the equivalent to 38 deaths a year. The deaths were mostly caused by car accidents, cardiovascular diseases and cardiac arrests.

According to the data provided by the Korea Labor Institute, nearly 88 percent of postmen work more than 12 hours a day. Kim Byeong-uk, a 54-year-old postman in Geochang County, South Gyeongsang, drove about 100 kilometers (62 miles) everyday before he was killed in a car accident. Kim was solely responsible for three towns in Geochang County - Wicheon, Gojae, and Buksang.

“The increasing number of civil servants’ deaths proves that Korea is a developing country in terms of occupational safety,” Kwon Soon-won, a business professor at Sookmyung Women’s University, said. “Public sectors should play a leading role in occupational safety through stricter policies.”