‘CONNECT, BTS’ dances its way to Dongdaemun: The global art project celebrates diversity in all of its many forms

‘CONNECT, BTS’ dances its way to Dongdaemun: The global art project celebrates diversity in all of its many forms 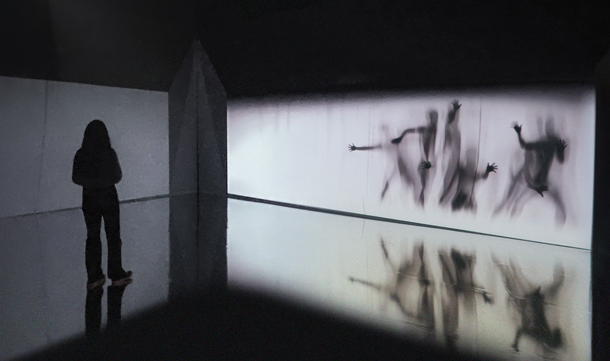 Artist Yiyun Kang’s “Beyond the Scene” is a 9 minute, 30 second video installed within the walls of a large square box. Seven choreographers including Shin Chang-ho have been inspired by BTS’s choreography and have created a unique video work using Kang’s signature method of projecting people’s silhouettes onto the screen as if people are dancing behind the wall in real time. [JEON TAE-GYU]

K-pop superstar BTS has connected the world through its music, uniting listeners of different languages as one. This time, BTS takes that experience to another dimension and is connecting the world through art.

The Seoul leg of BTS’s transcontinental “CONNECT, BTS” art project kicked off on Tuesday at the Dongdaemun Design Plaza (DDP) in central Seoul, to run until March 20 as a part of the global art project that began earlier this month in London. The show features 22 artists and curators from around the world, with five different exhibits taking place in London, Berlin, Buenos Aires, Seoul and New York, all under the name of BTS and the band’s message of diversity. Works by artists Yiyun Kang and Ann Veronica Janssens are on display at the DDP exhibit.

The members of BTS welcomed local press to the exhibition on Tuesday through a video, as the group is currently in the United States.

“We hope that it’s a chance for us to pay back the love from ARMY that we are so grateful for,” said J-Hope.

“It’s not just art, but a deeper and cultural experience that we hope people get to see. The ultimate message is ‘let’s all do it together and accept our diversity,’” said Jin.

The London exhibit began the project with a work by multimedia artist Jakob Kudsk Steensen titled “Catharsis” on Jan. 14 to run until March 15 at Serpentine Galleries, followed by a series of performances by 17 artists at the contemporary art exhibition hall Gropius Bau in Berlin, from Jan. 15 until Feb. 2. The Kirchner Cultural Centre in Buenos Aires opened its film by artists Tomas Saraceno titled “Fly with Aerocene Pacha” to run until March 22. Only one work is yet to be revealed - “New York Clearing” by Antony Gormley at New York’s Brooklyn Bridge Park Pier 3 on Feb. 4. No commonality exists between the works other than the key word, “diversity,” since the project is all about blurring the boundaries between genres, generations, nationalities and experiences. 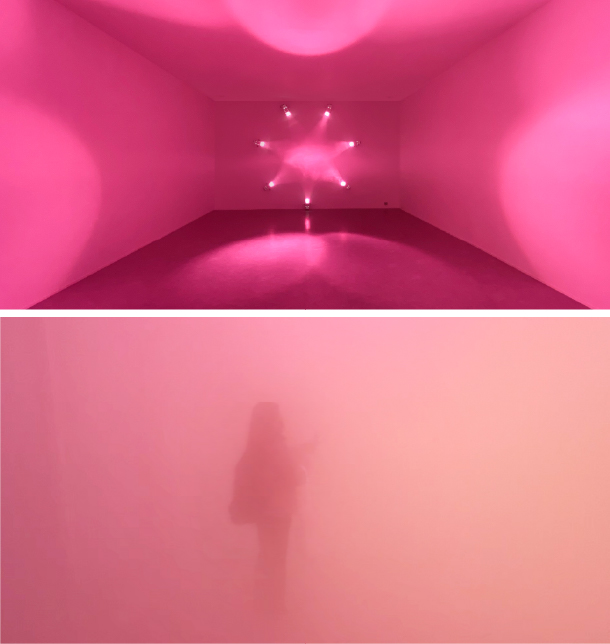 Ann Veronica Janssens has contributed two works for the Seoul exhibition: “Rose” (2007), top, and “Green, Yellow, Pink” (2017), above. Janssens highlights the materiality of light by using mist to create a foggy effect. The lights within “Rose” makes it seem as if there’s a solid star-shaped installation in the middle of the room, while at right, the foggy air within “Green, Yellow and Pink” allows people to act differently than they would in broad daylight. [JEON TAE-GYU]

Big Hit Entertainment and BTS took part in funding the project. But the cost of bringing all the artists and galleries together - plus the production fees for each work - was not revealed. When presented with the estimate of 10 million pounds ($13 million) by the Financial Times, chief curator and director of the project Lee Dae-hyung called it “a cute estimate.”

For the Seoul leg, Kang has created a large-scale video installation titled “Beyond the Scene.” The 9 minute and 30 second video was influenced by BTS’s choreography and was created by seven choreographers through projection mapping. Janssens contributed two works: “Green, Yellow, Pink” (2017) and “Rose” (2007). The artist is known to reveal the materiality of light by using mist, creating a foggy atmosphere within her installation. People see things in different ways and act in ways they wouldn’t in broad daylight - bringing out the diversity within the self.

“In the art world, we talk about how to embrace diversity, among the artists, curators, art institutions alike,” said Lee.

“Diversity definitely exists within the art world, but not outside the art world. It’s difficult to bring it outside and communicate together. But it’s a question that I shared with the curators at Serpentine Galleries: Where, how and for whom does art exist in the 21st century? We found it in the digital technology we have today, which became the root of the way we looked for the artists and the method in which we curated the exhibitions.”

According to Lee, he only gave the key word “diversity” and left everything to the individual curators to decide who and what works are to be included in the project. In fact, the project embodies the idea of collaboration only in the most fundamental sense, so much that the name BTS seems irrelevant to the exhibition. None of the works by the artists - except for artist Kang - were influenced by BTS, nor did BTS have a say in how the works are made or give direct suggestions on what they’d like to see at the exhibition.

“This collaboration is much like the relationship between a boat and the water. Art could be the boat and music could be the water or vice versa. What happens is that the boat moves through the water and creates a wave and it affects each other. It influences each other on the direction it moves and ultimately the future. It can exist in its own territory, but also together,” said Lee.

But that looseness in the connection between BTS and the artworks is the core of the collaboration, according to artist Kang.

“For a collaboration between artists and other entities, you would probably expect to see a more direct connection between the works and those who commission work. But here, BTS is the medium that connects everything. Is collaboration only a collaboration if you come together and make something together? I believe it’s about the philosophical, the conceptual and the ideological basis that we share together that makes it a collaboration,” she said.

She added, “The project is much like a live thing, with its multiple layers and complexity.”

Kang is the only Korean artist to take part in the project, which made her feel more attached to the project than other artists did. She was not a fan of the group before the project, but became amazed at how BTS changed people’s lives around the world during her research.

“The only reason that this project is possible, where such big places and artists work together, is because this is BTS,” she said. “The seven boys singing in Korean, which I presume most people don’t really understand, have changed the world. To watch them take over the mainstream scene is just amazing. Any other group would not have been able to pull this off.”