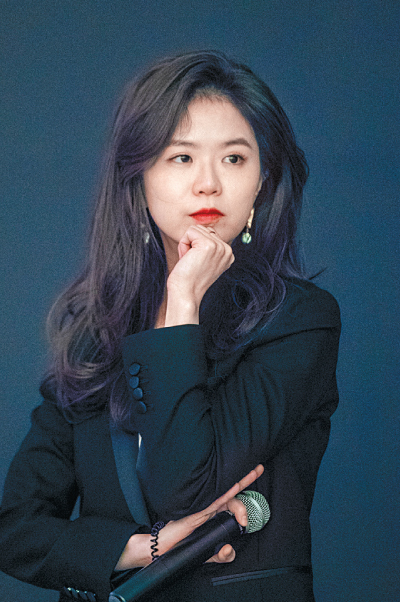 Yiyun Kang’s “Beyond the Scene” is inspired by BTS’s choreography. [KWON HYUK-JAE]

LONDON - In the spectacular digital artwork “Beyond the Scene,” the white curtains that continuously interact with the silhouettes of dancers reminiscent of BTS members symbolize the K-pop superstar band’s fandom ARMY, according to the artist Yiyun Kang. “It is an important element in this work, because the band BTS is completed by ARMY,” she said.

The Korea JoongAng Daily sat with Kang in London before the unveiling of her “Beyond the Scene” in Seoul, which is part of the transcontinental art project “CONNECT, BTS” co-planned and supported by the K-pop idol band. Kang, 37, a visiting lecturer at Royal College of Art in London, is best known for her site-specific digital art pieces based on projection mapping technology. Among them are those shown at the Victoria and Albert Museum in London and at the Italian luxury fashion house Max Mara’s exhibition at the Dongdaemun Design Plaza in Seoul in 2017.

Q. What aspects of BTS have you focused on in your work?

A. As I have collaborated with choreographer Shin Chang-ho and his team at the Korea National University of Arts for my digital works before, I decided to focus on the dance movements of BTS and to express the band’s struggles and growth through re-creation of their movements by Shin’s dance team. And I put the symbolic elements interacting with the shadows of the dancers, including the white curtains symbolizing ARMY, which I thought is important in particular. That’s why I interviewed some fans of BTS to create this work.

Could you go into detail about the interviews you conducted?

I interviewed 15 fans, and seven of them, who allowed their names to be revealed, are credited in the artwork. Among them was a Korean-British housewife in her 60s, who has been living in Britain for more than three decades. She hadn’t known anything about K-pop until she happened to see the BTS members speak at the United Nations General Assembly in 2018 and took interest in them. Then, she began to search their songs and music videos on the smartphone. When she saw the music video for “Fake Love” [a song about the someone exhausted by self-denying, self-sacrificing love] she burst into tears, because the song reminded her of her own life devoted only to her husband and children - not herself. She cried again telling this in the interview with me, and I also cried with her. After that, she became a big fan of BTS, going to concerts, including the London Wembley Stadium concert.

Did your interviewees also include non-Korean fans?

Only the fan I just mentioned was of Korean origin. The others were from other places. Among them was an African-British worker in the financial business. The fan, who has deep knowledge in the history of K-pop, told me BTS’s way of promotion is unprecedented in the world; contrary to the mysticism of many other bands, the BTS members shared their life and communicated with their fans intimately thanks to newly-developed digital platforms. Fans felt joy seeing these “hard-working guys in my neighborhood” grow to international fame, she said. Many other fans also pointed out the band’s healthy and sound messages including “be yourself” and “love yourself,” which the fans said became great comfort and healing for them.

How do you want your work to be received by the audience?

The conversation with BTS fans of diverse ages, jobs and backgrounds gave me a chance to look back on my art. Fine art is sometimes too exclusive. While it is called “high culture,” its influence on the general society is so little compared to that of BTS. I hope my work will give the audience, whether they are fans of fine art or not, some consolation and healing effects, similar to what BTS gives their fans.