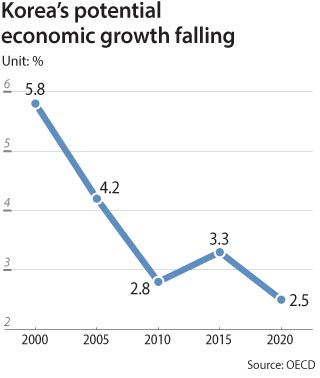 The Organisation for Economic Cooperation and Development (OECD) has once again lowered Korea’s potential economic growth this year, with a recent report forecasting a 2.5 percent growth potential, down from 2.7 percent one year ago.

Potential GDP growth is defined by the OECD as the maximum level of output that an economy can produce at a constant inflation rate.

The lower potential growth indicates a weakening Korean economy, even when accounting for its production factors including labor power and capital.

Korea’s potential growth after falling into the 3 percent range in 2009 has dropped to 2 percent since 2018 when it was at 2.9 percent.

The OECD expects the trend to continue, with 2.4 percent potential growth projected for 2021.

Korea’s rapidly declining growth is believed to be a result of an aging population combined with sluggish innovation and low productivity in the service industry.

The working-age population, those between the ages of 15 and 64, is estimated to have shrunk since 2017.

According to the economic research institute The Conference Board, Korea’s total factor productivity (TFP) in 2017 grew 1.2 percent but only grew 0.5 percent in 2018. TFP refers to value-added growth that can’t be explained by traditional inputs of labor and capital and is related to innovation in the production process.

The lower potential growth indicates that the government’s efforts such as fiscal expansion or the central bank’s policy of lowering key interest rates will have limited effect in propping up the economy.

“Last year the government raised the economy by pouring in the country’s money [into the economy],” said Yoon Chang-hyun, University of Seoul business professor. “But it had little impact in creating value added.”

He said only when the government actively improves conditions that will boost investment in the private sector will the potential growth rate rise.

Some experts say it would be difficult to turn around the falling growth forecasts without changing the nation’s economic structure, which is heavily dependent on exports and the smokestack industry.

“The global economy is reorganizing toward centering on the highly-valued service industry, yet Korea still remains with an economic structure that is centered on exports,” said Lee Geun-tae, senior researcher at the LG Economic Research Institute. “Korea’s potential growth could continue to fall if it fails to catch up to the rapidly progressing fourth industrial revolution.”