Markets respond as virus fear starts to affect the economy

Markets respond as virus fear starts to affect the economy 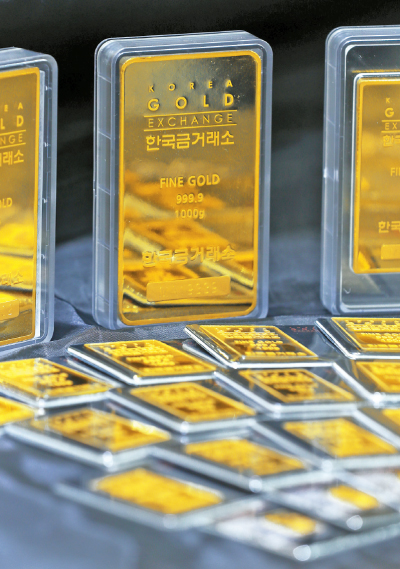 Gold bullion on display at the Korea Gold Exchange in Jongno District, central Seoul, on Tuesday. With fear over the Wuhan coronavirus rising, demand increased for safe assets.[NEWS1]

The Wuhan coronavirus is making the markets ill as well.

Stocks plummeted Tuesday as it became apparent that the deadly disease would have a significant impact on the real economy, forcing the shutdown of some China-based production and hindering travel and transportation.

The Kospi declined 3.09 percent to close at 2,176.72 on the first trading day after the Lunar New Year holidays, which started Friday. It was the largest daily drop since Oct. 11 in 2018.

The bio- and tech-focused Kosdaq fell 3.04 percent to close at 664.7 as investors soured on relatively high risk assets and turned toward safe-haven options such as gold and government bonds.

The Korean indexes followed on the route overnight, as U.S. stocks on Monday were hit by the concerns over the rising number of cases of the severe acute respiratory syndrome (SARS)-like virus and the ticking up of the death toll.

In Korea, among the hardest hit were the shares of tourism- and aviation-related companies, with Korean Air plunging 6.69 percent and Asiana Airlines down 5.24 percent.

“Among the most vulnerable sectors to the Wuhan virus epidemic are the Asia-Pacific travel and tourism sectors, particularly due to China’s travel ban on group tours out of China,” said Rajiv Biswas, Asia-Pacific chief economist at IHS Markit.

“The Asia-Pacific commercial aviation industry is also vulnerable to the impact of the new restrictions on Chinese tourism abroad, with initial indications that the regulatory restrictions on group travel will remain in place for at least a couple of months, depending on how the Wuhan epidemic evolves in the coming weeks,” Biswas said.

While Korean Air and budget carrier T’way Air announced the suspension of their flights to Wuhan Tianhe International Airport, Air Seoul, the low-cost carrier and subsidiary of Asiana, suspended all flights to China.

The outbreak of the Wuhan virus impacted the operations of key Samsung Electronics manufacturing facilities, after Chinese cities extended the Lunar New Year holiday for workers.

The tech company confirmed that its plants in Suzhou, which is about 400 miles away from Wuhan, will be shutdown until Feb. 8 in accordance with the city government’s order.

Samsung Electronics said that the company produces semiconductors, displays and home appliances at its factories. It added that no additional measures are expected.

Since the city is home to big manufacturers, such as Foxconn and Apple, bottlenecks are expected in the global supply chain.

Major Korean companies have banned or reduced business trips to China while relocating workers based in China to Korea.

SK Group is requiring workers from all group companies returning to Korea from Wuhan to work at home for at least 10 days regardless of the health status.

SK Innovation has a joint venture in Wuhan.

LG Electronics has banned all trips to China, and Posco has recalled four employees from Wuhan.

In response to the growing concerns and increase in the number of infections, the government will spend a 20.8 billion won budget in combatting the Wuhan coronavirus.

The spending will include 1 billion won for repatriating 700 or so Koreans living in Wuhan and 6.7 billion won to strengthen the quarantine system, according to Finance Minister Hong Nam-ki.

Another 5.2 billion won will be used to diagnose the virus and 2.9 billion won for treatment.

Additionally the government will tap into 2 trillion won of reserves if the budget is not enough to contain the fast-moving virus, according to Hong.