Jose Vicente de los Mozos, the straight-talking No. 2 from Renault Group, is parachuting in again, less than a year after his last visit to Renault Samsung Motors.

De los Mozos will be at the Renault subsidiary in Busan for two days starting Wednesday, making a stop there on his tour of the French automaker’s overseas facilities. 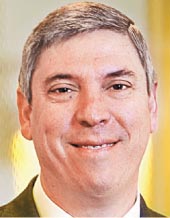 Last year, the acting deputy CEO brought tough love to the troubled automaker, saying that something has to give for the company to survive.

Since then, labor and management have remained in conflict, and they seem no closer to reaching an agreement.

The executive is not spending much time in Korea as he is on a tour of all Renault Group facilities around the world. Renault Group has an 80 percent stake in Renault Samsung Motors.

The visit of De Los Mozos comes in the midst of another flare up of the conflict between management and the workers, and a breakthrough of some sort is needed to keep the operation viable.

The union and management of Renault Samsung Motors are scheduled to return to the negotiating table from Feb. 4 to Feb. 7 to further discuss an agreement on the wage levels and working conditions of last year.

Disruptions by the union forced Renault Samsung Motors to suspend night-shift operations at it sole auto manufacturing plant from Jan. 10 to Thursday last week, which is when the both sides agreed to return to the table.

Hard-line protests have been steadily losing popularity, even among unionized workers, and the participation rate for the last strike was only around 30 percent.

The continuing conflict has been primarily centered on wage increases. For 2019, the union has been asking for an 8.01 percent increase in base pay, a bonus of 4 million won ($3,400) and a promise for new hires.

Renault Samsung Motors has been refusing to raise the base wage level, as weak sales and the loss of contract production orders have resulted in losses for the company.

In 2019, Renault Samsung Motors sold a total of 90,591 cars, down 34 percent from 137,208 posted a year earlier. Its production contract with Nissan for Rogue SUVs came to an end late last year.

The arrival of de los Mozos to Busan brings hope that the deadlock could be broken, as the Renault Group No. 2 has become known for his direct but reasonable style.

During his visit to the Renault Samsung Motors factory in February last year, de los Mozos warned that any rise in costs will harm the competitiveness of the factory in terms of group-wide production decisions.

He then also pointed out that production costs per hour at the Busan factory are already some of the highest among all Renault factories worldwide.