A series of new films hit the local box office over the Lunar New Year holiday and knocked the previous week’s film off the box office charts over the long weekend.

“The Man Standing Next” shot to first place in the rankings in its debut weekend, selling over 2 million tickets across 1,659 screens. Inspired by a true story, the film provides the perspective of Kim Gyu-pyung (played by Lee Byung-hun), the director of the former Korean Central Intelligence Agency (KCIA) under former president Park Chung Hee. KCIA was an all-powerful organization in Park’s regime allowed to do anything under the pretense of detaining anti-government or pro-communist forces. On Oct. 26, 1979, the director, who was known to be one of the president’s associates, assassinates Park (played by Lee Sung-min).

The gripping film tells the story of the 40 days that led the second-most-powerful person in the country to make that choice on Oct. 26.

“Hitman: Agent Jun” placed second place with 929,000 people seeing the film at 1,121 screenings. Actor Kwon Sang-woo portrays the character Jun, a former hit man and current web comic series artist. Formerly known as a legend, Jun quit the National Intelligence Agency (NIS) to fulfill his dream of becoming a web comic artist. However, after his series receives only bad reviews, he drunkenly decides to draw up a story containing confidential knowledge that ends up going viral overnight. By becoming a popular artist, he simultaneously becomes a target for the NIS and a terrorist organization they are trying to get rid of. 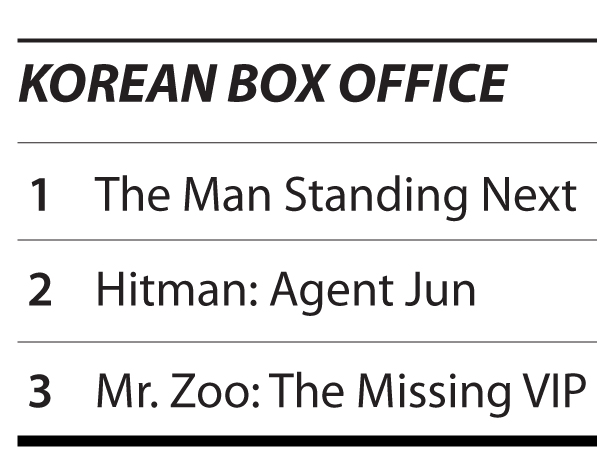 Another comedy featuring an NIS agent, “Mr. Zoo: The Missing VIP,” followed in third, drawing 289,000 viewers to 692 screenings. This agent, Zoo Tae-joo (played by Lee Sung-min), who despises animals, one day suddenly retains the ability to communicate with animals after a car accident. With his newly acquired ability, he must save a missing VIP for the sake of his organization and diplomatic relations with China. The animals in the movie are voiced by a star-studded cast, including Shin Ha-kyun, Yoo In-na, Park Jun-hyung, Lee Jung-eun, Lee Sun-kyun and Lee Sun-jae.

Animated film “Spies in Disguise” landed in the fourth spot, attracting 175,000 people to 712 screens. The film features lead voices of Hollywood stars Will Smith and Tom Holland as Lance Sterling and Walter Beckett, an elite agent of secret spy organization H.T.U.V (Honor, Trust, Unity and Valor) and a geeky MIT graduate fresh off of campus working as a scientist at the agency.

When H.T.U.V gains information on the trade of an illegal drone from Japanese arms dealer Katsu Kimura, the group sends Lance to acquire the weapon. However, the cybernetically-enhanced terrorist Killian manages to thwart Lance and the rest of the agency, and H.T.U.V is led to believe that Lance is a traitor.

To make matters worse, while Lance goes to Walter’s home to help him disappear, he swallows a concoction and transforms into a pigeon. Before Walter can make an antidote, the duo is chased by H.T.U.V agents. Now as a pigeon, he and Walter must stop Killian from carrying out his revenge against the agency.