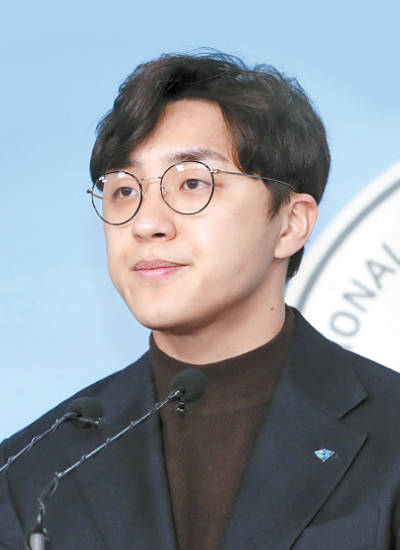 A star recruit of the ruling party for the April general election surrendered his nomination Tuesday after his ex-girlfriend alleged he was guilty of sexual assault including date rape.

“I will voluntarily return the nomination,” Won Jong-gun, 26, said in a press conference on Tuesday. The Democratic Party (DP) recruited Won as its political rookie on Dec. 29. He declared Thursday that he will run in a district race, rather than receiving a proportional seat.

At the press conference, Won denied the sexual assault accusations. “I didn’t live a reckless life,” he said. “I feel devastated to be labeled as a shameless person.”

He said he has decided to give up the nomination for having stirred controversy. “She was a woman I once loved,” Won said. “I believe it is a responsible attitude for me to share her pains caused by our past, although it may be belated.”

Won read his statement for two minutes and left without taking any questions.

The press conference took place 18 hours after a woman, who introduced herself as an ex-girlfriend of Won, posted the accusation on an internet forum. Won “has continuously treated me as a sexual toy,” she wrote. “He had tortured me with hatred against women and gaslighting.” Gaslighting is manipulating someone by psychological means into questioning their own sanity.

“I dated him for nearly a year,” she wrote. “Based on my experience, he was never a person who was capable of promoting feminism.”

When Won joined the DP, he was introduced as a young activist promoting the rights of people with disabilities and the poor.

When he was a teenager, he and his mother, who is visually and hearing impaired, appeared on a TV program in 2005, through which she received a corneal transplant. Since then, he worked on various charity projects, the DP said.

Immediately after the allegations were made, the DP leadership contacted Won and investigated the case. The DP then persuaded him to hold the press conference where he announced his decision to step down.

DP leaders remained tight-lipped about the allegations, and no statement has been made by the party concerning the controversy.

Criticism grew that the party’s recruiting committee, headed by its Chairman Lee Hae-chan, failed to verify the candidates. “If we had known, we would have not recruited him,” said Rep. Kim Sung-hwan, Lee’s chief of staff. “It concerns privacy. We could not investigate this area.”

“Just because he appeared on a TV program in the past and touched the viewers emotionally, parties were in competition to recruit him without any verification about his life,” said Chin Jung-kwon, a critic and former Dongyang University professor.

The opposition Liberty Korea Party (LKP) narrowly missed out on the controversy because it had also approached Won last month.

He, however, turned down the offer and announced he would join of the DP the next day, an LKP source told the JoongAng Ilbo.

The DP is acting swiftly to exclude risky candidates. Criticism grew earlier this month that National Assembly Speaker Moon Hee-sang is trying to hand over his electoral district to his son, Seok-gyun, because the son will have an advantage in the primary.

The DP announced on Jan. 16 that its leadership will name a candidate, rather than holding a primary in the Uijeongbu A District of Gyeonggi. Moon Seok-gyun announced last week that he won’t run.

Speculations are also high that the DP will not allow controversial politicians such as former presidential spokesman Kim Eui-kyeom to run in the primaries.

Kim resigned in March last year after explosive backlash to reports that he dabbled in real estate speculation, possibly with inside information. Last month, he declared his bid to run in Gunsan, North Jeolla, as a DP candidate.

The DP’s candidate-vetting committee held a meeting later Tuesday and said it needed more time to reach a decision.

“From now on, it’s all about reducing mistakes,” a DP lawmaker told the JoongAng Ilbo. “If we swiftly discard unforeseen problems, we can minimize in losing votes.”