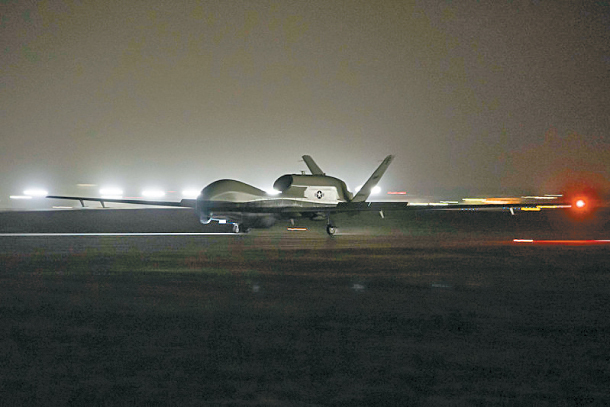 On Tuesday, the U.S. 7th Fleet revealed a squadron of Washington’s new cutting-edge drone - the MQ-4C Triton - which was deployed for the first time to Guam on Sunday in an effort to enhance the U.S. Navy’s surveillance capacities in the Pacific. [YONHAP]

The United States appears to be escalating aerial reconnaissance of the waters in Northeast Asia, amid signs of activity at a key North Korean missile site.

According to CivMilAir and Aircraft Spots, two Twitter accounts that track military aircraft worldwide, a U.S. Air Force WC-135W Constant Phoenix plane was detected as having departed Kadena Air Base in Okinawa, Japan, on Tuesday, possibly in the direction of the East China Sea.

While the flight itself is just the latest of a series of surveillance flights regularly conducted by Washington in the region, what stands out with Tuesday’s flyby is that the WC-135W is known as a nuke “sniffer,” used to collect information like radiation levels from nuclear tests.

Though the route the plane was ostensibly on suggests it could be aimed at China rather than North Korea, a recent report by CNN on Sunday suggests Pyongyang may have kicked off preparations for a missile test of some kind, testified to by satellite imagery. Citing satellite images of the Sanumdong missile research center near Pyongyang obtained by the East Asia Nonproliferation Program at the Middlebury Institute, the report said multiple vehicles were spotted at the complex, though they were not likely to be involved in fueling missiles.

Sanumdong is a key military site where at least two Hwasong-15 intercontinental ballistic missiles, which could potentially reach the U.S. mainland, were believed to have been manufactured. The last time notable activity was detected at the plant was in March last year, and North Korea conducted various weapons tests mostly involving short-range ballistic missiles throughout 2019.

CNN quoted one senior U.S. official who said the latest activities at the complex were “consistent with what we’ve seen prior to other missile tests,” though there was no conclusive evidence of a test by North Korea on the horizon.

With its denuclearization negotiations with Washington still deadlocked over the question of economic sanctions, Pyongyang has recently ramped up activity at key nuclear- and missile-related sites across the country, possibly with the intent of demonstrating its capacity to return to provocations.

The Sohae Satellite Launching Ground at Tongchang-ri, North Pyongan Province, for example, was effectively restored to full operability in December, when the regime conducted two rocket engine tests apparently intended for long-range missiles. While not followed up by actual missile tests, such actions have raised tensions in the region to their highest point since 2017.

In response to such activity, the United States has also been scaling up reconnaissance activities in the region on a wider level to check China’s maritime ambitions in addition to the nuclear threat from Pyongyang.

On Tuesday, the U.S. 7th Fleet revealed a squadron of Washington’s new cutting-edge drone - the MQ-4C Triton - was deployed for the first time to Guam on Sunday in an effort to enhance the U.S. Navy’s surveillance capacities in the Pacific.

The Triton is an unmanned aerial vehicle developed by the arms contractor Northrop Grumman from the RQ-4 Global Hawk, specialized for maritime surveillance and patrol. The deployment of the drone squadron to Guam, from which Washington can monitor most of Northeast Asia including North Korea, had been expected for next year, but the program appears to have been greatly expedited in the face of growing tensions in the region.