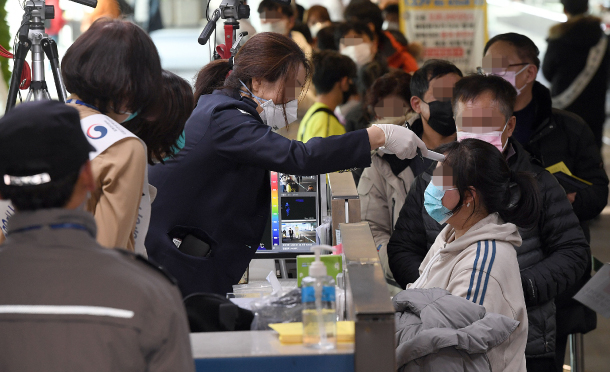 Quarantine officials at the arrival terminal of Incheon International Airport check body temperatures of all incoming passengers from China on Tuesday in a new measure to prevent the spread of the coronavirus. [YONHAP]

Those who left the Chinese city of Wuhan over the past 14 days to enter Korea will be required to undergo testing for possible infection of the coronavirus, local health authorities announced Tuesday.

Anyone showing symptoms of the virus, such as fever or respiratory problems, will be quarantined at a government-designated hospital for isolated treatment, the Korea Centers for Disease Control and Prevention (KCDC) announced.

Health officials said 3,023 people were found to have traveled directly from Wuhan of Hubei Province, central China, the epicenter of the coronavirus outbreak, to Korea between Jan. 13 and Monday. Of those people, 1,166 people are Korean nationals and the rest are foreigners.

Most of them had gone off the government’s radar because they showed no symptoms of the virus upon their arrival in Korea and authorities didn’t keep track of their health conditions.

To rectify that, the KCDC vowed Tuesday to cooperate with local government offices, the police, customs officials and the Health Insurance Review and Assessment Service to check whether those who returned from Wuhan are currently showing any signs of the virus and keep an eye on them till their 14-day incubation period ends.

A KCDC official said everyone will be notified to be tested.

Tuesday’s announcement was arguably Korea’s boldest step so far to contain the spread of the virus after health officials confirmed three additional cases over the Lunar New Year holidays, bringing the nation’s total number of cases to four. 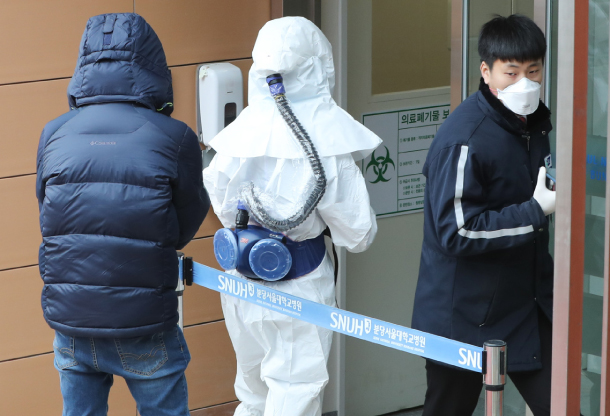 A medical worker in protective gear escorts a patient suspected to be infected with the coronavirus into a special care unit of Seoul National University Bundang Hospital on Tuesday. [NEWS1]

All four people had traveled from Wuhan.

The third and fourth patients especially raised red flags because they didn’t show any signs of the virus when they arrived in Korea through the airport, where officials have been trying to track down infected patients and quarantine them before they come in contact with anyone else.

Alarmed that the symptoms can appear days after the infection, President Moon Jae-in on Monday ordered the monitoring of people in Korea who recently returned from Wuhan, stressing the need to take “pre-emptive” measures in preventing further possible cases.

The coronavirus, which broke out in Wuhan last month, has resulted in 2,801 infections across the world as of Tuesday, mostly in China. Eighty people died, all in China.

On details of the fourth patient in Korea, whose infection was confirmed Monday, the KCDC said he appeared to have been near 172 people from the point he arrived in Korea from Wuhan on Jan. 20.

That means more people who came within a certain physical boundary of the fourth patient - who’s only been identified as a man in his 50s living in Pyeongtaek, south of Seoul in Gyeonggi - could be infected with the virus, given that the disease can be transmitted from human to human.

The KCDC said the fourth patient mostly moved around his home and a clinic in Pyeongtaek, unlike the third patient who roamed around Seoul’s Gangnam and Seocho districts and Ilsan, Gyeonggi, visiting a plastic surgery clinic, dining out at restaurants, ordering a drink at a coffee shop and dropping by a convenience store by the Han River.

With fears about the virus rising throughout the nation, some local government offices and schools are coming up with various ways to calm jitters, in part by canceling events, postponing classes - and for students who recently came back from a Chinese trip - denying their entrance to schools.

Cho Hee-yeon, superintendent of the Seoul Metropolitan Office of Education, said Tuesday while presiding over an emergency meeting that his office will consider delaying the start of the spring semester for schools in Seoul. Most elementary through high schools in Korea are scheduled to start the upcoming semester on March 2.

Gyeonggi’s education office took a step further than Cho, announcing Tuesday it would advise every elementary through high school inside the province to cancel or reduce the pageantry of its school admissions ceremonies. Like its Seoul counterpart, however, the Gyeonggi education office took a more cautious stance on postponing school start dates, saying the issue would have to be further consulted on with the Ministry of Education and health officials.

The Gyeonggi education office further announced that students and faculty members who returned from China in the past 14 days - or who live with family members who came back from China in the past two weeks - will have to undergo a checkup to see whether they’ve been infected by the virus and should be blocked from entering school premises until after the incubation period ends.

Korea’s first case of the virus was reported on Jan. 19 when a 35-year-old Chinese woman who traveled from her home in Wuhan to Incheon International Airport to spend the Chinese Spring Festival holidays with her friends in Korea and Japan was confirmed to have been infected.

She was stopped at the airport after airport officials found she showed symptoms of the virus.

The second through fourth cases of the virus, all reported over the Korean Lunar New Year holidays from last Friday to Monday, were all Korean men in their 50s who had visited Wuhan.